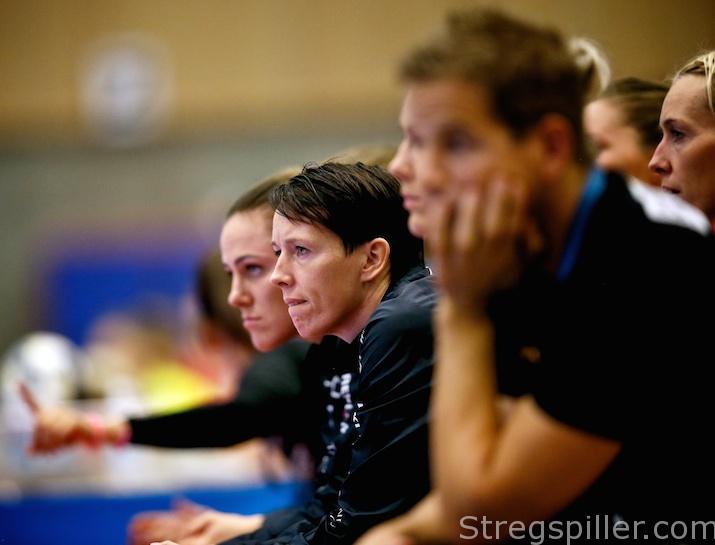 “Great to be back, but only for a while”

INTERVIEW – Kristine Lunde Borgersen enjoys to be back on the court, although her comeback was not planned at all.

In this exclusive interview with stregspiller.com, the 37-year-old playing assistant coach of Vipers Kristiansand emphasizes that her return to the pitch will only last as long as playmaker Marta Tomac is sidelined.

The Lunde sisters are back where it all started.

The 37-year-old twins Katrine Lunde and Kristine Lunde-Borgesen are re-united at home in Kristiansand.

Kristine was back with Vipers last season already as assistant coach, while Katrine returned after a long and glorious foreign career abroad, this summer.

While Katrine was signed as reinforcement for the goalkeeper position, Kristine’s plan was to continue as assistant to head coach Kenneth Gabrielsen. But a torn anterior cruciate ligament of Viper’s playmaker Marta Tomac resulted in a surprising comeback to active duty for Kristine Lunde Borgersen.

“It was definitely not planned, but Marta´s injury made it necessary for me to take another season on the court.

“As things have turned out, it is great to be back, but my comeback will definitely not last any longer than this season,” says Kristine Lunde Borgersen who is Katrine´s older sister, born three hours before her.

Together with her sister, she has won virtually everything worth winning in handball – World Championship, European championship as well as the Champions League.

Great to play with Katrine again

This season, she is playing in the same team as her “younger” sister for the first time in seven years. Until 2010, the twins played for the same club all their handball life.

They always managed to sign for the same clubs and move on at the same time. After winning the Champions League with Danish Viborg HK for the second time in a row, they went separate ways, following a dispute with Viborg on extending their respective contracts.   The issue resolved itself with the sisters leaving the club.

They continued to play in different squads, until Kristine ended her career two years ago, while sister Katrine joined Russia’s Rostov Don.

“Of course, it is great to play with my sister again. We both missed it. It is just as great that we have the opportunity to simply be together again on a daily basis,” says Kristine Lunde Borgersen, who sticks to her role as assistant coach at the Champions League qualifiers on home ground this weekend.

The job title playing assistant coach has been coined for the weekend, as Kristine will stay on the bench.

“I have a few minor nagging injuries, so we have agreed that I had sit out the matches this weekend if possible, as we have tough schedule ahead of us,” she explains.

She could certainly take it easy on the bench on Saturday, when her team ran over HC Gomel.

The Belarusian champions were thrashed 43:19.

This team can go far

The challenging schedule she refers too will become even tougher after this weekend, when the 2017/18 Champions League will await the new top team in Norwegian women´s handball.

“There is no doubt that we can get far with this team, but we also have to remember that we are new to all of this as a team. Although some of us have been there before.

“And there are many other good teams in Europe – so we will have to caution our expectations,” finds Kristine Lunde Borgersen.

People do not only have huge expectations here at Vipers when it comes to the Champions League. The powerhouse from the far south of Norway is also seen as the number one competitor that will break Larvik´s dominance in Norway.

Apart from the Lunde sisters, Vipers has been reinforced by national team player Emilie Hegh Arntzen (left back), and the exceptionally talented Malin Aune (right wing).

At the same time, Larvik has seen a generational change – so all eyes are on Vipers now.

“I think we have a good chance to win the championship and maybe also Norges Mesterskabet (the Norwegian Cup, ed.) but the road will be long and difficult, and there are other contenders as well.

“I do not think you can write off Larvik yet.

“However, we do have a good squad with a lot of potential,” finds Kristine Lunde Borgersen who is happy to be back on the court – but only for a while.