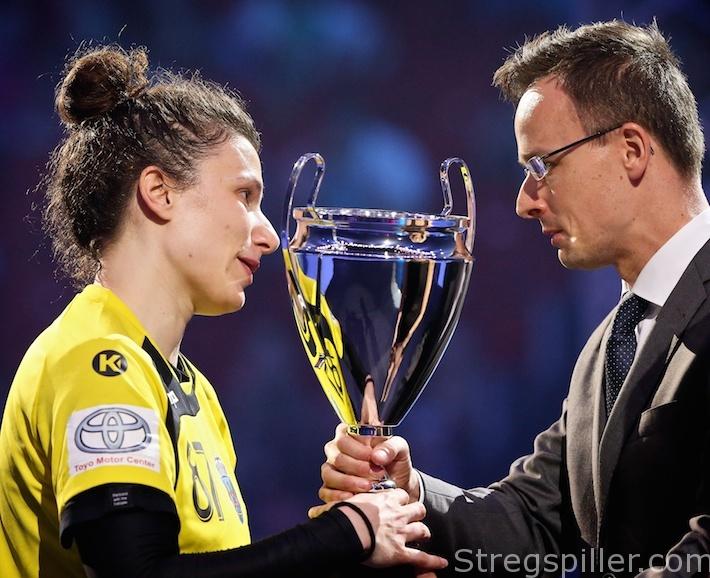 Grubisic dreaming of a repeat

INTERVIEW – Ruling Women´s Champions League winners CSM Bucuresti are struggling to reach the quarter-finals in the tournament this season.  However, it does not worry their Croatian star goalkeeper Jelena Grubisic too much.

“We will simply have to repeat what we did last year!” as she puts it in this exclusive interview with stregspiller.com.

It is understandable that Jelena Grubisic “relives” May 8th of last year once in a while.

After an insanely exciting final at Papp Laszlo Arena. in Budapest, she and her teammates from CSM Bucuresti were able to lift the Champions League trophy as the ultimate prize finishing their maiden season in style, winning the most prestigious club tournament in the world.

CSM had defeated the odds-on favorites from Gyor, 29:26 after two extra time periods and a penalty shoot-out.

On top of this triumph, Grubisic was awarded “Most Valuable Player” of the 2016 FINAL4.

I still remember her sitting at the press conference, barely visible behind the big trophy that she had just received.

“Of course, it was a great honor for me to be awarded MVP, and it is a moment I still remember with a happy smile.

“However, I only collected the award because of a fantastic effort from the entire team.

“That final was simply crazy, but we felt that we could play without pressure, and we continued to believe in ourselves and control our nerves in a close match.

“Of course, it added an extra dimension to the victory that we defeated my former club, Gyor!”

However, it was not her who performed the decisive saves in the penalty shoot-out.  Surprisingly, CSM coach Kim Rasmussen had replaced her with Mayssa De Pessoa shortly before – the Brazilian international became the heroine putting on the finishing touches on an epic game of handball.

But before she could do so, Jelena Grubisic delivered superb performances in the semi-final against Vardar as well as in the last game of the prestigious tournament.

Since then, her partner in CSM’s goal has changed. De Pessoa has moved on to Vardar and was replaced with Romanian legend, Paula Ungureanu.

“It has been really great to get Paula in our team.

“She is a fantastic goalkeeper with an enormous experience, and she and I have a very good cooperation together,” says Jelena Grubisic about the 36-year-old Romanian international.

It placed some extra responsibility on her shoulders, when Ungureanu was out because of an injury for several weeks at the beginning of this year.

“Yes, it did have to carry some more weight, but I did not feel alone, as we have Alina Iordache – she is a brilliant goalkeeper as well.  And she was a great support to me, when Paula was out, but fortunately, she is back now,” she explains.

Will need to copy last season

A fit Paula Ungureanu will be very much needed along with the rest of CSM players, if the Romanian champions are going to repeat their achievement from last season and go all the way in the Champions League in 2017.

At the moment, half way through the main round, CSM are fourth in their group with seven points, only one more than fifth placed Krim from Ljubljana.  The fight to reach the quarter-final will be a tough one.

“We cannot be entirely happy with our performance in the Champions League so far.

“Of course, we were in a tough preliminary group, but we still lost more points than we should have.

“In the main round, we have not lived up to our own expectations either.

“We started with a draw at home against Larvik, where we definitely hoped to win.

“However, I think we have been better since then, and I do hope we can also be more consistent now and get some more points in our remaining main round matches against Larvik, Esbjerg and Krim.  It will allow us to not only reach the quarter-final, but also do so from a better position than number four.  This will be very important,” she says.

Yet, it all is a bit of a deja-vu for Grubisic and her CSM teammates.  Last season, they qualified for the quarter-final from fourth position in their main round group, and not many people – at least outside Romania – expected them to have a chance against undefeated Rostov Don.  Expectations did not grow significantly after the first leg, when CSM earned a narrow 26:25 win.

However, in the return match in Russia, CSM landed another one-goal victory (29:28) and proceed to the FINAL4.  In Budapest, Vardar were defeated decisively (27:21) in the semi-final, setting up that nail-biting fight against Gyor.

“We simply got better and better through the tournament, and as we became more and more successful, our self-confidence grew accordingly.

“Basically, we simply have to copy what we did last season.

“However, it will be difficult, not the least because Line Jørgensen is still injured.

“We hope to have her back next month, and this will be a great help for our team – we really miss her as right-back,” says Jelena Grubisic about the Danish international who has been sidelined since the fall of last year.

Neagu is joining – what a coup!

“I am really glad that Line has chosen to extend her contract with the club for another two years – she is very important for our team,” says Grubisic who is also happy about another addition to the team.  A few days ago, it became official that Cristian Neagu will be joining CSM next season.

“This piece of news really made me smile.

“I think it is a great honor that Neagu has chosen to play with us, and it obviously is a fantastic reinforcement.

“I am certainly looking forward to playing with her,” says Jelena Grubisic who still is under contract with CSM next year.

She will be in the Romanian capital for another season since leaving Gyor.

Turmoil is a thing of the past?

Her time at CSM has been quite turbulent so far – as the team had four coaches in this period.

First, Mette Klit was sacked and replaced by fellow Dane, Kim Rasmussen, who led the club to the Champions League triumph. But he left the organization and became national coach in Hungary.  Yet another Dane, Jakob Vestergaard, succeeded Rasmussen.

Vestergaard did not last long, though, and now Romanian Aurelian Rosca is in charge.  But rumors are already linking a fourth Dane, Helle Thomsen, with CSM Bucuresti in 2017/18.

“Of course, every coach has different ideas and a fresh approach to the game.

“Therefore, changing coaches so often is not an ideal situation.

“However, I am convinced that management will try to make sure avoiding similar turnover in the future.  We now expect continuity in the coaching staff,” she says.

People, who were expecting to see 30-year-old Jelena Grubisic in the Croatian national team at the recent European championship in Sweden, were looking for her in vain.

“I am no longer playing for the national team.

“I had some disagreements with the coach some time ago, and since then, I have chosen to not play for Croatia anymore,” says Grubisic who is not likely to change that decision no matter who the coach might be in the future.

“No, I am not going to play in the national team again.

“From now on, I am focusing entirely on the club,” she says.

Her next assignment will be the road game against Larvik on Saturday.

“We only got a draw at home against them (26:26) so I hope we can make up for the points in Norway, but I realize that it will be tough,” admits Jelena Grubisic.