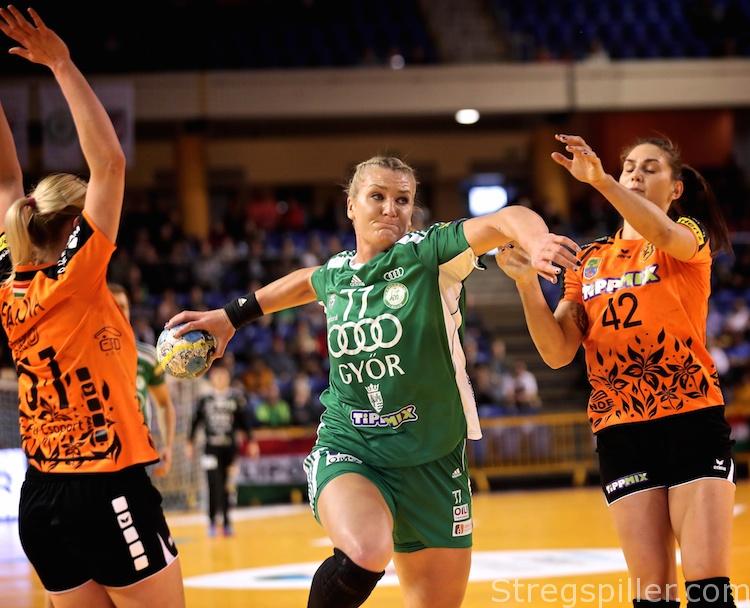 MATCH REVIEW –  Györ had absolutely no problems with Érd in the second semi-final of the Magyar Kupa Final Four, on Saturday.

Actually, Érd were only able to follow the favorites until the score stood at 2:2 and besides a minor comeback late in the first half, the rest was Györ’s show.

If you thought the first semi-final was one-sided, the second match in Debrecen was even more so.

The game was a repeat of last year’s final, when Györ won 27:23.  This time, things were worse for Érd, who only managed to follow their opponents until the score was 2:2 after five minutes.

The rest of the match belonged completely to Györ who scored more or less as they pleased.

It took just seven minutes for the Hungarian champion to get the game under control, going from 2:2 to 6:2 in virtually no time.

A timeout called by Érd coach Edina Szabó did not help her team as Györ took a six-goal lead.

Gabriella Tóth was seen as one of Hungary´s most promising playmakers, when she played for Györ as a young girl and before injury meant serious setbacks to her career.

Now, she plays for Érd, and she did her best to orchestrate their offense and enjoyed most success when Györ moved back from a 5-1 defense into a 6-0 formation.

Furthermore, it was a bit of a paradox that Györ´s defensive play suffered, when Eduarda Amorim and Zsuzsanna Tomori took to the court.

However, in attack Györ had absolutely no problems, scoring 20 goals in 30 minutes, but their usually strong defense conceded 15 goals – unusual.

Poised for the win, Györ continued where they left off before the break. They even managed to stabilize their defense to a certain extent, only allowing Érd 10 more goals for the first 25 minutes of the second half.

Coach Danyi’s team increased their lead throughout the second period, and at 38:25, their lead was at its highest with two minutes left.

Although Györ were unable to reach the 40-goal mark, they made fans will see the final so many have been looking forward to – another meeting between the two Hungarian giants Györ and FTC.

“I think it was a fine match – we were in control more or less all the way and it worked to our advantage that we were able to save some players along the way and provide court time to everyone else.

“Now, we can look forward to another exciting game against FTC in the final tomorrow. We are two teams who know each other very well, so it;s unlikely that we’ll be able to surprise each other with anything new.

“As you know, we have drawn twice with FTC in the Champions League this year and that will make a win tomorrow even nicer.

Fónix Hall was still far from being packed and there is hope it will change for the final on Sunday.

However, the many Györ fans made the noise they are known for and a colorful group of Érd supporters did their bit adding to the ambience.

Érd coach Edina Szabó collected a bronze medal as a player in the Magyar Kupa, back in 2007.  She’ll get a chance to get another one, this time as coach, in the bronze match against Dunaújváros, on Sunday.

Györ, on the other hand, can start preparing for the final against FTC on Sunday at 18:00.