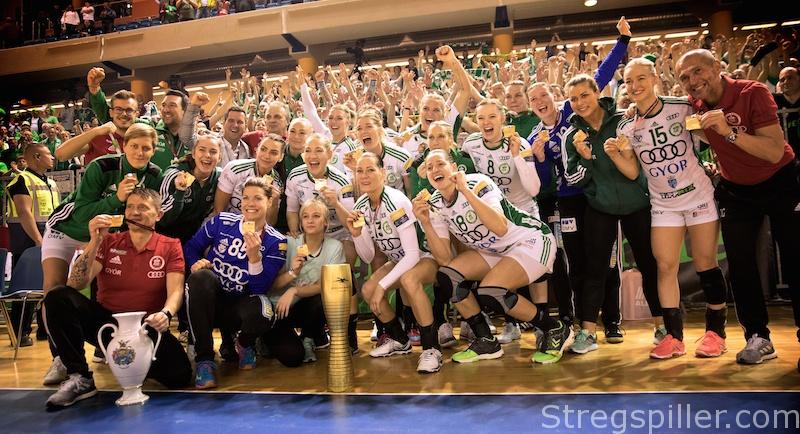 MATCH REVIEW – In a great handball match, full of drama, Györ won the Magyar Kupa in Hungary for the 14th time in club history. However, the favourites had to fend off an impressive comeback from their eternal rivals FTC, before they could lift yet another trophy.

Both teams entered the final with big wins in the semi-finals on Saturday. FTC defeated Dunaújváros 33:26, but Györ were more emphatic in a 39:26 win against Érd.

The teams had drawn 32:32 in both of their recent EHF Champions League meetings, but this time a winner had to be found, and a winner was certainly found, although the game turned out much differently from the previous encounters.

Györ looked set to decide the match already in the first half, going nine goals up five minutes before the break, but a fantastic comeback from FTC made the scores level before the middle of the second half.

In the end, however, Györ proved to be the better and more experienced team, which saw them secure them their 14th Hungarian Cup triumph.

Bearing the equal Champions League matches between the two teams in mind, it was particularly surprising how one-sided this first half turned out to be. In fact, there was virtually only one team on the court in the first 30 minutes.

Amandine Leynaud, who did not get court time at all in the semi-final against Érd on Saturday, started in goal this time, and the French international enjoyed a brilliant start.

So did her defence, who appeared much tighter than against Érd, and it took FTC six minutes and 12 seconds to score their first goal – when Nadine Schatzl finally hit the back of the net from her left wing position, Györ had already scored three times.

A timeout from FTC coach Gabor Elek in the 11th minute, when his team were down 6:2, did not help and neither did replacing Blanka Biro with Melinda Szikora when Györ were leading 13:5.

As FTC´s efforts to get back into the game became more and more stressful, they made more and more technical mistakes and Györ were merciless at punishing them.

After Györ had their biggest lead at 15:6 with seven minutes left of the first half, FTC had a moment of joy as they scored three goals in succession, but Györ extinguished that hope in a hurry and it was more than difficult to see how FTC would come back into this game.

Trailing so badly against a team of Györ´s calibre is almost a lost cause.

Almost, but not always.

It was a completely changed FTC team which entered the court after the break and it soon showed.

With an improving Biro back in goal and a more aggressive defence than in the first half, FTC managed to reduce the gap to only two goals at 20:18 in virtually no time.

Soon afterwards, Nerea Pena converted a penalty to equalise at 22:22, but that was as good as it got for the Budapest-based club.

Györ fired back to lead 26:23, and from then on they were constantly three or four goals up.

FTC did simply not have another comeback in them, and as Nycke Groot made it 32:28 with a penalty, the final was decided.

The Fónix Hall in Debrecen was considerably closer to being full than the previous day and the atmosphere benefited from this, as it always does when these two giants in Hungarian women’s handball meet.

It was hard to say, which team had brought most supporters, and let us just say that while Györ won the match on the court, the match between the fan groups ended in a draw.

For a couple of weeks, both sets of players can focus on national team duty and the Hungarian league, before the quarter-finals of the EHF Champions League await in early April.

Györ are in for an easy task against Danish side Odense HC, finishing the tie at home, while FTC can expect a considerably tougher challenge against Rostov-Don with an away second leg.