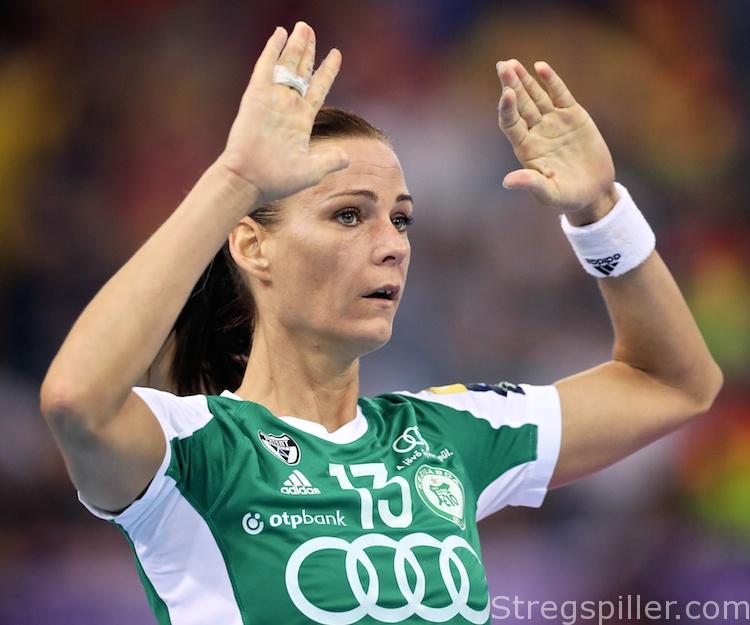 stregspiller.com – MATCH OF THE WEEK REVIEW – Despite an eight goal half time lead, Györ had to fight hard for their win against Vipers Kristiansand.

The Norwegian visitors cut the deficit to three goals twice in the second half, but in the end, Györ’s experience prevented real damage.

Vipers deserve plenty of credit for staging a heroic comeback in the second half, where they reduced the gap to only three goals on two occasions.

In the end, Györ proved to be the better team, disregarding a few shaky periods.  The fact that Jeanett Kristiansen (Vipers), who scored 10 goals against THC last weekend, only scored once this time, was yet another factor.

Györ, who were already qualified for the quarter-finals, sit comfortably on top of Group 2 with 13 points, as Vipers Kristiansand remain in second place, at least until Sunday evening.

Vipers followed the host until the eighth minute, but from then on it was Györ´s game.

The home team enjoyed their first two-goal lead at 6:4 and a timeout called by Vipers coach, Ole Gustav Gjekstad at 8:5 did not help the Norwegian champions.

Via 9;5, 11:6 and 15:8 Györ continued to build their lead, before Gjekstad called his second timeout.

Still, there was not much Vipers could do against a Györ team that kept piling up goals.

Anne Mette Hansen was particularly successful. The Danish left back scored seven goals on eight attempts in the first half alone, while a strong goalkeeping performance of Kari Aalvik Grimsbø (Györ) added to Vipers’ misery.

Her opponent, Katrine Lunde did her best to keep her team in the game, saving four shots from the penalty spot among others, but it was far from being enough.

Only when Györ coach, Gabor Danyi, began rotating this team towards half time, were Vipers able to reduce the deficit from eight to five goals.

Any hope that Vipers may have harbored following their successful finish in the first half, were put to rest as soon as the match resumed. Györ ran off to a nine-goal lead (24:15) without much trouble.

However, those at Audi Arena, who thought the match was decided, soon had to think again, as Katrine Lunde stepped up her game even further. On top of it, Vipers found solutions against Anne Mette Hansen and slowly but surely Györ’s momentum seemed to disappear. Vipers scored five goals in a row and at 25:22 the prospects of the Hungarian champion all of a sudden looked shaky.

A well-placed timeout from Gabor Danyi served as a wake-up call, and soon thereafter the hosts were up by six goals once again (29:23).

Vipers came within three (29:26) one more time, but at this point Györ answered back, scoring two quick goals, effectively putting the game out of reach.

Györ: Kari Brattset (7/7) with a perfect score from the line and Anne-Mette Hansen shooting 8/13).

The Women´s Champions League will go on a two-week break, before Györ will visit CSM Bucuresti (February 23rd), a team they thrashed 36:27 in the first leg.

On the same day Vipers will be the favorites at home against Slovenian Krim.