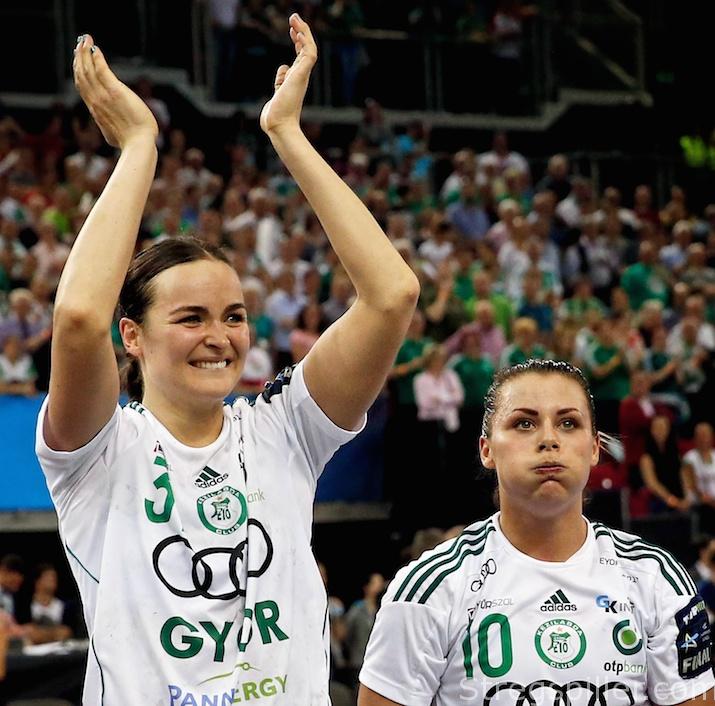 MATCH REVIEW – Buducnost never stood a chance against an efficient Gyor machine, which was running well from the beginning to the end of the game.

In fact, the final result – 26:20 – in favor of Gyor does not even provide the full picture of the match. The Hungarian team was superior in all aspects of the game against a disappointing Montenegrin side.

”We have had ups and downs,” Cristina Neagu told me after Buducnost´s quarter-finals.

That’s right, but at least, the pride of Montenegrin handball landed two clear victories, in the quarter-finals, against an injured ridden Larvik. The Norwegian’s finished second in their main round group compared to Buducnost´s third place.

Gyor had their troubles on the road against Metz, in the first leg of their quarter-final tie, but after being five goals down, the Hungarian favorites got away with a narrow 31:32 loss.

At home in Audi Arena, they left no doubt which team would advance, winning 28:22. The match was a remake of the semi-final a year ago. On that occasion Gyor succeeded narrowly 21:20.

Buducnost, whose team will be split up after this season, missed their chance for one last triumph with their current crew.

In fact, the Montenegrins were without any chance against a very well playing Gyor team, in a match where Buducnost left a disappointing impression.

Cristina Neagu, Katarina Bulatovic and to a certain extent Djurdjina Jaukovic were the only Buducnost players who could be content with themselves.

Gyor, on the other hand, had a convincing performance and the “home team” will get their opponents thinking, no matter who it will be on Sunday afternoon.

Two players kept Buducnost in the game before the break – barely.

Cristina Neagu (5 goals) and Katarina Bulatovic (4 goals) were the only two Buducnost players who scored in the first 30 minutes!

Gyor were the better team, by far and should have been up by more than three by the time the two teams changed sides.

However, lack of accuracy in the attack and a number of ill-advised decisions of the referees, explain why Gypr’s lead was not higher.

Gyor got off to a jump start (4:1), before Buducnost settled into the game courtesy to goals from Neagu and Bulatovic.

However, it did not take the Hungarian’s long to establish another three-goal advantage at 7:4.

With a well-shooting Eduarda Amorim and a fine performance from Anita Görbicz, on left wing, Gyor soon went up by five five (10:5 and 11:6).

Three successive goals by Neagu and Bulatovic reduced the deficit, before Yvette Broch benefited from a Buducnost mistake, beating the buzzer.

Nine minutes into the second half, Djurdina Jaukovic scored Buducnost´s first goal, making use of a penalty, reducing the score to 10:15.

It was also the firs goal of Buducnost, not scored by either Neagu or Bulatovic.

Around the same time, a sparrow flew under the roof of the arena. That poor bird had just as big a chance to get out into the fresh air, as Buducnost had to change the course of the game.

One of the mistakes, the Macedonians made throughout the first half, was starving their wings and line player.

Neli Irman, Itana Grbic and Dijana Ujkic kept running towards the middle, since they got nothing to work with on their wing positions.

As for Buducnost’s line player – Dragana Cvijic – she scored two goals, both way into the second half and too late to make a difference.

The disqualification of Zuzsanna Tomori, for her third two-minutes suspension after 43 minutes did not bother Gyor either.

The six-goal lead Gyor had established at the beginning of the second half more or less lasted the rest of the match.

Buducnost cut it to four a couple of times, but that was it. They simply had too many problems dealing with Gyor’s super-strong defense and goalkeeper Karin Aalvik Grimsbø. She saved a whopping 44% of all balls coming her way.

Dragan Adzic tried all his three goalkeepers as well as pushing Neagu forward in a 5-1 formation, but it was all in vain.

She is only one week away from her 34 years birthday, but it did not show in Anita Görbicz’s performance.

I am not awarding her as the “Player of the Match” because of her nine goals on 12 attempts, nor for being reliable on converting penalties.

What is even more impressive is the way she has adapted to playing the left-wing. Against Buducnost, she did get her time as playmaker, but it was her outstanding performance on left-wing positions that stood out.

For once, it took place during the break.

A die-hard Gyor fan proposed to the deeply surprised lady of his heart – and received her “yes”. Among all the ecstatic Gyor supporters, this couple was probably the happiest.

Gyor can prepare for their second Champions League final in a row and a historical fifth.

On Sunday, they should enter the court with confidence after their convincing performance in the semi-final.

Buducnost can look forward to another bronze medal match, just like last year. The placement match will be the last time for some years, before Buducnost returns to the FINAL4, in all likelihood.

Coach Adzic will be building a new team – it will take time.