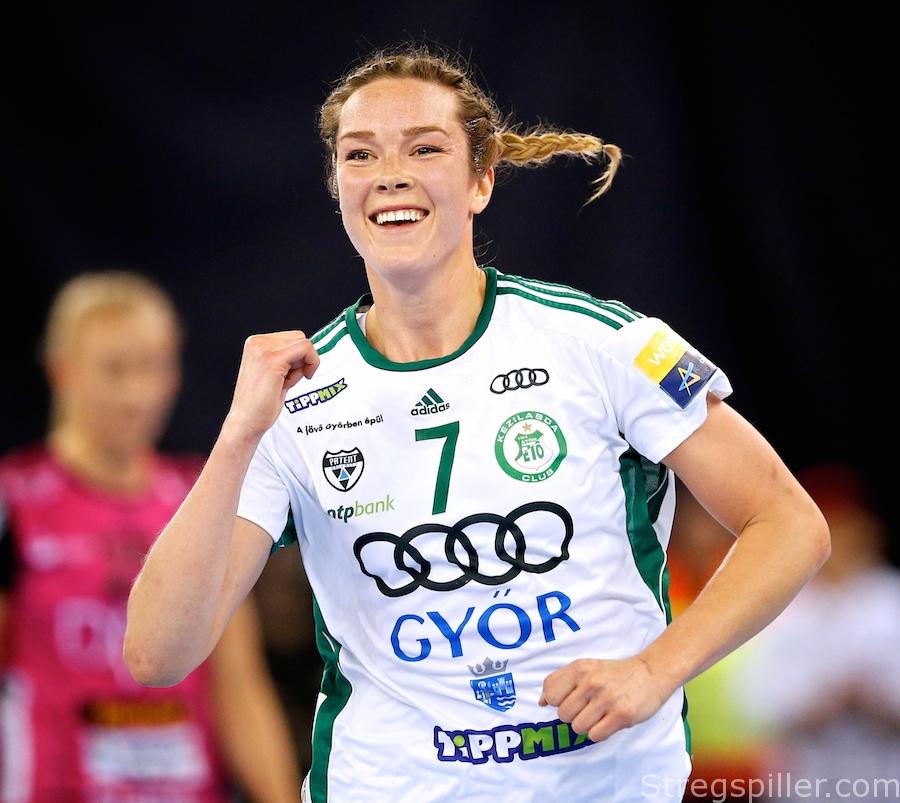 SEMI-FINAL REVIEW – Györi Audi ETO had absolutely no problems reaching their fourth Champions League final in a row, as they met Vipers Kristiansand in the first semi-final in Budapest on Saturday.

The Norwegian FINAL4 debutants were absolutely no match for Györ who decided the matter already in the first half.

The teams already met in the main round of the Champions League this season, with two Györ wins as the outcome – 33:29 at home and 33:26 away.

With no less than five Norwegians in the Györ team, it could be a match Norway versus Norway for great parts of the time.

To Vipers goalkeeper Katrine Lunde, meeting Györ will probably always be special, as she played there from 2010 to 2015 and won the Champions League with the team in 2013 and 2014.

Having also won the competition with Danish Viborg HK in 2009 and 2010, she should be able to inform her teammates, what it takes to win the Champions League.

Just like Lunde in the Vipers team, Györ’s Brazilian left back and defence specialist Eduarda Amorim could win the competition for the fifth time in her career.

There were definitely successful Norwegians on the court in the early semi-final, but those the Norwegian players in the Györ team.

Vipers were leading 1:0, but from that point on, Györ were dominating to an extent, which was close to being embarrassing for Vipers at times.

Györ were 12 goals up, when their lead was at its highest at the beginning of the second half, and Vipers’ only consolation will probably have been the fact that they won the second half, while Györ did not use too many resources ahead of the final Sunday.

The first 30 minutes turned out even more one-sided than one might have feared.

Vipers’ first FINAL4 goal ever also became the first goal of this FINAL4. Emilie Hegh Arntzen had the honour of scoring it.

The rest of the way, Györ were just as dominating as the final result indicates.

Vipers did not seem able to match Györ physically, and in the Hungarian goal, the French World and European champion Amandine Leynaud outshone her more experienced adversary Katrine Lunde.

Ole Gustav Gjekstad sacrificed two of his time-outs in the first 16 minutes, trying to put some belief into his players.

His colleague on the opposite bench had a much more pleasant job.

No matter what players Gabor Danyi sent on, they were a success.

The 10-goal difference at half-time was still embarrassing for Vipers, and it was hard to understand, while Gjekstad did not try to change goalkeeper.

Eline Fagerheim may be far behind Katrine Lunde, but considering Lunde’s lack of success, trying something else could not have made things any worse.

After that first half, it as impossible to see how Vipers would be able to make a match out of it.

Considering Györ’s huge lead, the match inevitably lost plenty of intensity, not least as Györ economised a bit with the resources with thought to the final.

However, Vipers went on to score four goals in a row and reduced the gap to seven goals at 23:16.

Towards the end, Danyi gave court time to his entire bench, and the versatility of his time was emphasised by the fact that all Györ field players got their name on the scoreboard.

In the last minutes, Vipers managed to reduce the gap with a couple of goals again, but they did got closer than that seven-goal deficit 12 minutes into the second half.

During the 40 minutes and a bit, the French goalkeeper was on court for Györ, she did a marvelous job with a saving percentage of 58 in the first half alone.

She was then rested and made way for first for Kari Aalvik Grimsbø and then for Eva Kiss.

A full Papp Laszlo Arena is always an awesome sight, and usually, it also sounds awesome.

However, the lack of excitement meant that even the many Györ fans made a bit less noise than they normally do.

The 240 Vipers fans did what they could to fire their team on despite not having much to cheer about, but quite naturally, they could not match the crowd from Györ.

Györ can prepare for their fourth Champions League final in a row and chase a hat trick of trophies, and they can do so without having tired themselves too much in the semi-final.

To Vipers coach Ole Gustav Gjekstad, it may not be all that difficult to motivate his players for the bronze match, as they will undoubtedly be keen on improving the impression, they left us with this Saturday.

Furthermore, a third place will probably always be attractive to a FINAL4 debutant, now that it could not be the final!