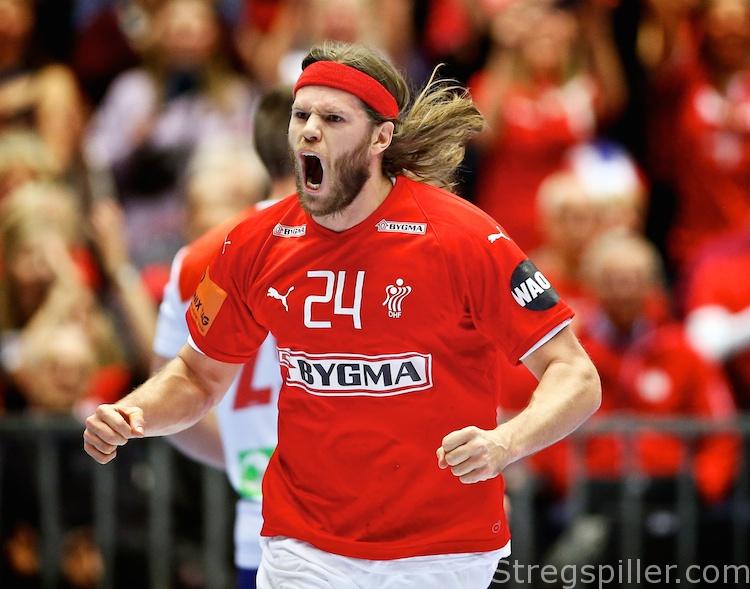 The match between the Scandinavian neighbors promised handball at the highest level, in a battle for the group win and the best possible starting position for the main round.  The game also showcased the two best handball players in the world, Mikkel Hansen (Denmark) and Sander Sagosen (Norway)

Until the very last moment, it was unclear if left wing Casper U. Mortensen (Denmark) would be able to play, after sitting out the two previous games because of a knee injury.  His name was on the team sheet, but would he play?

14 goals on 18 attempts from Mikkel Hansen played a huge part in Denmark’s victory, and so did Niklas Landin who was in spectacular form once again.

Casper U. Mortensen remained on the bench during the entire thirty minutes and in the 14th minute, lineplayer, René Toft Hansen, had to leave the arena as well, after a foul.

The handicap did not keep the Danes from dominating most of the first half.  And, in central defense, Anders Zachariassen and Simon Hald, delivered an impressive performance in the absence of  Toft.

It was surprising to see how easy Denmark scored their goals, as Norway’s defense did not represent an obstacle and neither did Torbjørn Bergerud in goal, who ended the day with a 22% save rate.

Only Eivind Tangen (right back) and Kristian Bjørnsen (right wing)  caused Denmark some problems.  But, it didn’t take the Danes long to limit their activities as well, while Norway´s superstar, Sander Sagosen, was kept completely out of the game. First, he missed a 7-meter penalty shot, before shooting another four blanks.

Eventually, Denmark went up by five goals (16:11), before Norway cut the deficit towards half time, when Magnus Jøndal reduced the score to three, converting a penalty shot right at the halftime buzzer.

Although, there was no sign of René Toft at the start of the second half, the Danes got off to the better start once again.  Scoring the next three goals, the hosts secured their first six-goal lead (20:14), which was soon increased to 25:16.

Casper U Mortensen briefly took to the court, when Magnus Landin received a blow to his face, but it wouldn’t take long before the youngest Landin returned to the pitch.

It wasn’t until the 46th minute before Sagosen scored his very first goal in the match, at a time when Norway began reducing Denmark’s lead, recording four unanswered goals.

The men of coach Christian Berge got as close as two goals (27:25), before Mikkel Hansen and Rasmus Lauge removed any lingering doubts.

“I think we fought very well against a very strong opponent and when they got closer, we fought hard and resisted any further damage.

“Niklas helped us a great deal, of course, and so did Mikkel.

“We can only be satisfied with our performance, now that we have these two extra points.”

“I have to congratulate Denmark to a deserved victory – we played against a better team and we were struggling from the start throughout the game.

“Actually, I think we adjusted quite well, when Denmark changed their attack to 7-against-6, but in the end it was not enough.”

The two Macedonian’s, Georgi Nachevski and Slave Nikolov, did not have their best evening in Herning, as two-minutes suspension were handed out without rhyme or reason.

There were some other calls that remained a mystery as well.  In general, they appeared to favor the home team.

To illustrate the interest for this match: 1.200 people were on a waiting list for one of the 15.000 tickets allowing entry to Boxen arena.  Inside the atmosphere was fantastic and once again Denmark enjoyed the benefit of outstanding support.

Denmark take four points to the main round and Norway will enter the next phase of the tournament on two points.

Along with third placed Tunisia, Sweden, Hungary and Egypt (Group D) these teams will complete the main round group, in Herning, with game action to commence on Saturday.

Which Danish team will take to the court is an open question, right now.

“Things do not look good with René,” was all Nikolaj Jacobsen could say about René Toft Hansen´s condition.