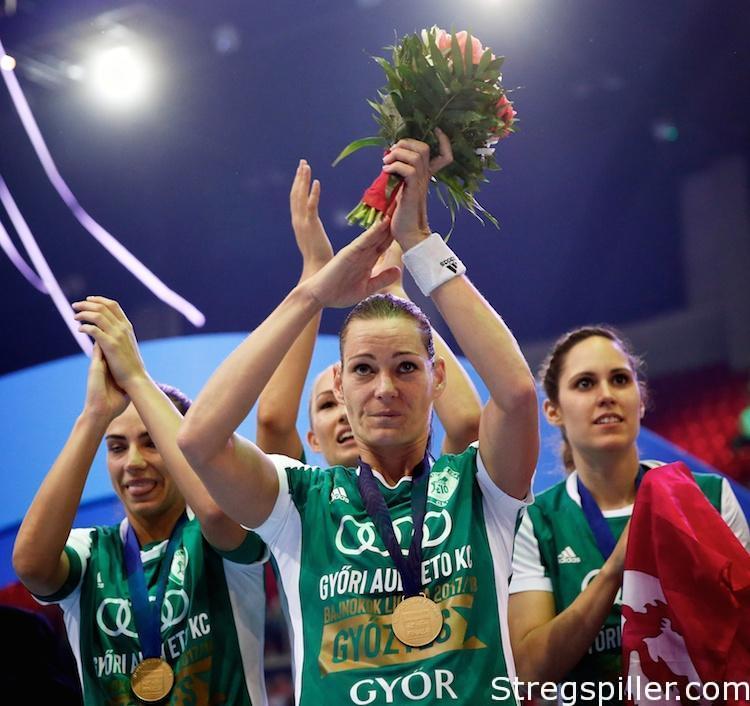 FINAL REPORT – Anita Görbicz handed herself the best possible present to her 35th birthday, as she and her Györ teammates won the Women´s Champions League for a second year in a row. Once again it was Vardar Skopje experiencing another one-goal defeat and once again after extra time.

Both teams enjoyed surprisingly easy victories in their semifinals on Saturday against disappointing opponents.

Györ did not have much trouble with CSM Bucuresti (26:20), and the job was just as easy for Vardar who swept FINAL4 debutants Rostov-Don of the floor 25:19.

Although both finalists entered final day with six-goal wins, Györ left a more convincing impression in their match against Bucuresti compared to Vardar’s success against an underwhelming performance of the freshly minted Russian champion.

Anita Görbicz could not have imagined a better way to celebrate her 35 years birthday. The “Queen of Handball” won yet another Champions League title with the club of her life – Györ.

The final game of the 2017/18 Champions League was certainly not a match for the connoisseurs of fine handball, but what it lacked in finesse was more than compensated for by drama and tension.

Every time one of the two teams seemed to decide the affair in their favor the other side came back. Given the frequent twist and turns, it was almost logical that extra time was in the cards again.

From the get go, Györ’s players were so eager that coach Ambros Martín had to calm them down. It helped as Györ while dominating the first 20 minutes or so.

Once again, Martín’s lineup included Nycke Groot as right back, Stine Oftedal running the show as playmaker and Eduarda Amorim on the left back position.

It had all worked fine against CSM Buchuresti a day earlier and it did – in the beginning – against Vardar as well. In fact, if was not until Martín began to rotate his backcourt line, including Mireya Gonzalez (right back) and Anne Mette Hansen (left back) when Vardar recovered some lost ground.

Trailing 7:4 the Macedonian team slowly started to catch up and they continued doing so even when Ambros Martín returned to his initial formation.

For quite some time the score remained at 7:5, before Vardar broke the deadlock and with four successive goals they took the lead for the first time, when Polina Kuznetsova made it 8:7.

A strong performance of Amandine Leynaud in Vardar’s goal also played a crucial part during this phase of the hard fought encounter as she enjoyed a 47 percent savings rate, a statistic that usually translates into victory. This time it was only good enough to protect Vardar’s tie at the half.

Vardar began where they left off – staying in the driver´s seat.

It took Györ the better part of seven minutes to score their first goal in the second half, when Anne-Mette Hansen reduced to 11:10.

Györ clawed itself backed in to the game but when Anita Görbicz made it 14:13, halfway through the second half, it was the beginning of trading one-goal leads for the rest of the match.

In the dying moments of the game Vardar had the advantage, but Györ fought back and kept tying the score time and again. And when Macedonians hit the goal post on a wide-open shot, extra time was needed for the third time in a row to decide the Women’s Champions League final.

Extra time commenced with a one-women show by Eduarda Amorim who – after having scored the equalizer (20:20) in regulation time – recorded the first three goals of Györ.

Vardar kept hitting back before Nycke Groot handed Györ a 24:23 half time lead.

Meanwhile Ambros Martín had replaced Kari Grimsbø with Eva Kiss in goal, a golden decision, as it would turn out.

Kiss made the saves, while Amorim scored goals.

Four goals from the Brazilian left back played a critical role, as Györ went up by three for the first time since leading 7:4 in the first half.

When the Brazilian left-back made it 26:23, it sure looked like game over, but Vardar weren’t done yet. After a steal Andrea Lekic charged down the pitch, passing to a wide open Andrea Canadja right in front of Györ’s goal, only to see her shot from close range saved by Kiss with three seconds remaining.

For a second year in succession, Györ had defeated Vardar by one goal after extra time.

This final had the potential for any number of players to crown their outstanding achievements in the sport of handball but Györ’s Anja Althaus stood out.  A mere 12 months ago she made an unexpected move and joined the Hungarian handball powerhouse.

After losing the 2017 EHF Champions League final, she was ready for retirement.  That was before she answered the call hardly any handball player can resist.

Fast forward to May 13th, 2018 and you would see Anja Althaus lifting the most prestigious trophy in club handball, together with her teammates.  Once again the final match went into extra time but this Anja Althaus came out a winner – for a third time in her long and outstanding career.  Congratulations Anja Althaus!

Of course, Györ fans were the dominating voice in Papp Laszlo Arena – after all the game took place in Hungary – but Vardar was not without support either as many of CSM’s die-hard fans joined the Macedonian strong hold to push Vardar as much as possible.

Györ became the first team to win back-to-back Champions League titles after the format was introduced in 2014.

It’s historic, of course, but we will dedicate this “Take Away” to Vardar.

The final match was their last game in international top handball before their all-star roster will be leaving after this season. As the only team, Vardar was part of all five FINAL4´s to date but they never succeeded in the last round of Europe’s premier club competition. Still, there is every reason to thank Andrea Lekic & Co. for all the thrilling moments they brought to the event.

CSM Bucuresti took third place, for a second time after winning the bronze medal in 2017.

Despite throwing away an early eight-goal lead, they succeeded 31:30 against the FINAL4 debutant, Rostov-Don, leaving Budapest empty handed.

The match was the last one for Norwegian pivot Marit Malm Frafjord on the international level, as she will end her career after this season.