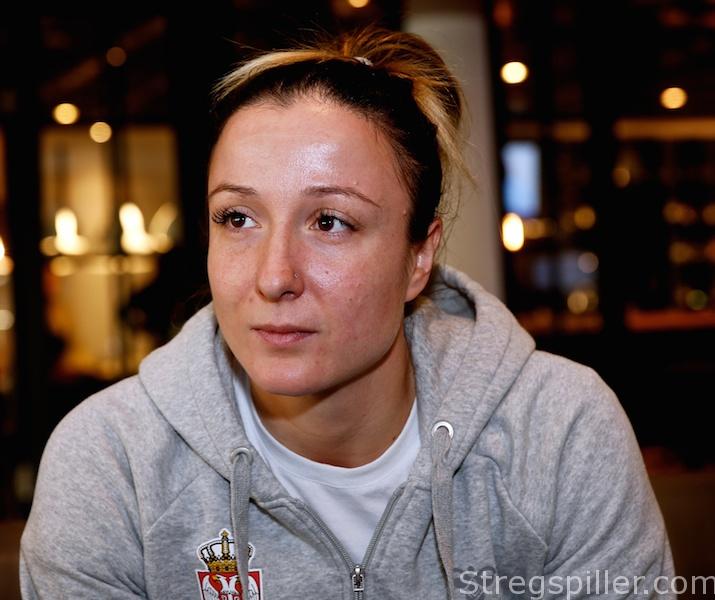 “Happy with our team spirit”

INTERVIEW – Serbian right wing Katarina Krpez Slezak is content with her team´s performance at the World Championship, so far.

Even though Serbia are already through to the Round of Last 16, she sees the Friday’s game against South Korea as a key match to her team´s chances in the tournament.

Katarina Krpez Slezak has turned into one of the most critical players for Serbia at the 2017 World Championship.

The 29-year-old right wing has been scoring reliably from right wing as well as on penalties. For now, she is content with her team´s performance.

“I am really satisfied and I am content with our results, and I think we have played well, so far and I am particularly happy with our team spirit.

“Even though we have given up two points because of the draws, I am happy that we kept fighting until the very end in each match. That is something we must continue doing in the games to come in order to succeed,” she tells stregspiller.com.

“We also have to get rid of some of the mistakes we’ve made, especially before our last group match against South Korea, which will be a difficult match – no doubt.

“It will be particularly important to us that we stay focused until the end, not the least because we have given two points already. I hope, of course, that we can win this time,” she adds.

Trying not to think too far ahead

She does not want to think too far ahead certainly not beyond Friday night’s game against Korea.

“We take it step by step and try to improve our level in every game that we play.

“After the Korea game, it will be easier to say something about our chances going forward.

“I hope we can reach the semi-final, but I really do not want to say too much about the future, right now. After the match against Korea tonight, I am sure we will all be a lot wiser,” predicts Katarina Krpez Slezak.

Even though she is reluctant to talk too much about her team´s prospects at the championship, she finds reason for optimism – like so many others in the Serbian team – given the fact that key players such as Andrea Lekic, Dragana Cvijic, Katarina Tomasevic and Sanja Damnjanovic are all back in the squad.

“Actually, it feels as if nothing has changed since they were in the team last.

“The players who came back are all great athletes, and it has meant a lot to our team.

“We have a very strong team, especially including those players. Some people even see us as some kind of secret favorite in this tournament, I simply hope that they are not wrong!”

High expectations in Lekic and Cvijic

Like so many others, she is impressed with the cooperation between playmaker Andrea Lekic and Dragana Cvijic on the line. Understandably, she has high expectations as well.

“They have played together for a long time. They already played together in Krim Ljubljana, and now they are reunited at Vardar Skopje. They obviously know each other extremely well, and that is important to us, of course.

“Andrea always knows how to find Dragana on the line, and when she does it usually translates into a goal or a penalty shot for us. Their cooperation is of tremendous value to us,” finds Katarina Krpez Slezak.