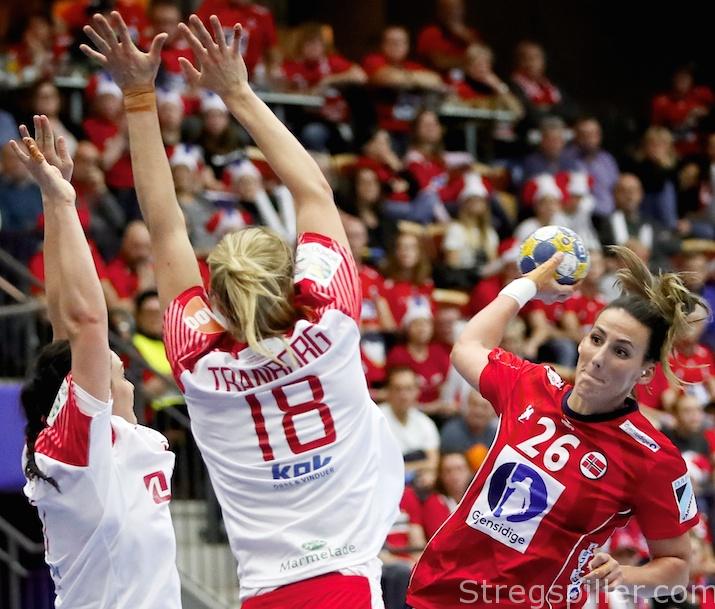 “Hard work is the key”

Hard work, serious preparations and believing in the concept are the secrets behind the Norway’s advancement to yet another major championship final, according to playmaker Marta Tomac and goalkeeper Kari Aalvik Grimsbø.

It seems so logical – Norway is back in the final of a European championship . Even though their semi-final victory against France on Friday night was a close affair for 53 minutes, it did not end in a surprise. The Norwegians decided the matter in convincing style; scoring the last five goals of the game and earning a clear 20:16 win after all.

“Actually, we were rather nervous ahead of the match against France, as we knew of their strong defense and their strong physique, of course.

However, we managed to stick to our concept and kept believing in ourselves,” explains Marta Tomac, who national coach, Thorir Hergeirsson, has used as a kind of “joker” at this European championship. For instance, in Norway´s first main round match against Denmark, once Tomac appeared on the court Norway was able to secure a 22:20 win.   Not only did she score the final goal of the match, but she also by stepped in as playmaker, when things were not working for Stine Bredal Oftedal.

“Yes, I have also seen my role in the team as a “joker” at this tournament, and I have been fine with this part; helping out as back-up to Stine,” says the 26-year-old center-back, who – unlike many other players at the European championship – is not playing in a European top club, but at Norway’s Vipers Kristiansand.

“Of course, there is a big gap between the Norwegian league and a competition like the European championship, but I have played several championships by now, and I also used to play in the Champions League, so this level is not entirely new to me.

“And just wait and see. It will not take long before Vipers are in the Champions League too”, the 179 cm tall backcourt player tells stregspiller.com.

We may very well believe her.    For this season, Vipers have already signed former Norwegian international, Linn Jørum Sulland as well as the Glassverket trio Jeannette Kristiansen, Kari Brattsett and Kristin Nørstebø. And from next season onward, no one less than all-star goalkeeper, Katrine Lunde, will be joining from Rostov-Don.

Marta Tomac is in no doubt, why she and her Norwegian teammates have qualified for the final of a major championship again.

“We are working hard all the time, we are preparing thoroughly and we are good at sticking to our concept,” is her explanation that may sound overly simplistic as the other countries at the European championship will probably have done the same – worked hard and prepared as good as possible. So is Norway just that much better than the all other teams?

“I am not sure we are all that better than the other teams, but perhaps we work just a little harder, prepare just a bit more thoroughly and are slightly better at sticking to our concept in critical situations.

“Furthermore, our goalkeepers have bene outstanding, and Silje Solberg’s performance in the semi-final against France (her official saving percentage was recorded at 59) was just out of this world – so here you have another element that explains our success,” says Marta Tomac who expects the same factors will decide the final against the Netherlands, on Sunday evening.

“Our defense, our goalkeepers and our ability to stick to our tactics and to our agreements will be just as important again, but I expect a much harder resistance, than in our most recent final against them (31:23 for Norway at the 2015 World Championship, ed.)”

“There is no doubt that the Netherlands have improved in the meantime, and we should be particularly aware of their many possible lineups when in attack. They have many skilled and dangerous offensive players,” finds Marta Tomac, and her teammate, goalkeeper Kari Aalvik Grimsbø agrees.

“I expect to meet a completely different Dutch team this time around.

“I am used to competing against several of the players in the Champions League with my club (Gyor, ed.) and there is no doubt that they can give us a hard time, if we are not at our absolutely best,” says Grimsbø, who was not surprised by the performance of her goalkeeping partner, Silje Solberg, Friday night.

“She is so cool and so good at reading the shooters.

“Furthermore, the cooperation between her and me is really outstanding, and we are particularly good at inspiring each other and providing each other with valuable information on the opponents´ shooters,” says Kari Aalvik Grimsbø who provides stregspiller.com the following three reasons why Norway will win the final: