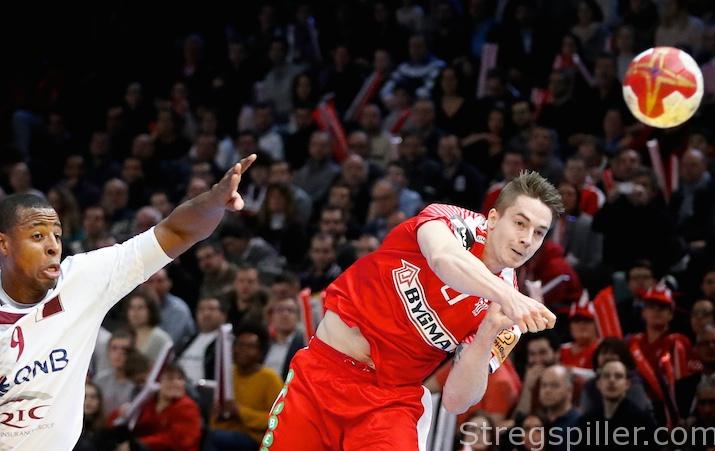 A new HBL season in Germany is about to begin this week but clubs already started the campaign with some cup matches. For example, the SC Magdeburg reached the round of the last-16 easily.  After the game, I spoke with Danish sharpshooter Michael Damgaard, who is called “Breathless” by the fans of his club.  He is aiming to finish in the Top 5, at least.

Congratulations to the two victories this weekend, did you waste more energy than necessary?

MD: Actually, I think we didn’t use enough energy,  as we missed something on Sunday.  On Saturday it was good and we did our job, but in the second match we were only leading by five, six goals.  It’s not enough and things can happen.  We cannot be satisfied, but we can build from here.  We have to be better when the Bundesliga starts.

I talked to Jannik Green and I asked him about the second half of last season –  I think it’s impossible to play better.  He agreed, do you?

MD: I agree that it was amazing, but I don’t know if we can do it again.  I really hope we can repeat it, we did a great job in 2016/17.  Sadly, we didn’t win the EHF Cup, which was our big goal last year.  So, we need to succeed in the right games.  Even though we had a lot of good matches, we only finished fifth in the league.  It was difficult for us, but not a disappointment because we collected 51 points.  Normally, it´s great to be the third-best team in the league – but not last year.  Like I said it was outstanding and I hope we can do it again.  We need to if we want to be a part of the top this year.

What do you have to do to replicate the success of last season?

Sounds easy, but in fact it won’t be all that simple.

MD: No, but it’s the best you can do.  Hard work, every day, and work harder than our opponents and we will see.   But every squad wants to win every game so I do not know what else we can do.  I think we need to do a good job right at the beginning of the season, winning our first home games and then take it from there.  We play Kiel and Berlin at home and it’s quite important to get a good result from these games.

I think you developed even better last season compared to your first year in the league?

MD: I don´t know.  Yes – we won, but also my first year was quite satisfying.  I was the best left back in both years (considering goals scored), but victory is more important than personal success.  Although, I was very happy with my first year, I played well and I made many good decisions – unfortunately it wasn’t enough.  I was satisfied, but I cannot be too happy because I wanted the team to succeed.  When we win everything then you can ask me again about it.

Do you know your nickname among the fans of Magdeburg?  They call you “Breathless”, because of your outstanding shot release.  I remember the buzzer beater against Kiel which won the game for Magdeburg.  I thought there was not enough time to shoot at all, but then – boom – the ball hit the back of the net.

MD: Yeah, it was a good day at the office, but I need to improve, right now.  I need to work hard to reach this level once again.  I feel that I’m on the right path and it includes the team as well.  Everyone has to do plenty of work because if we don’t work hard, we won’t have an opportunity to score in the last seconds against Kiel to win the game.  So – work hard every day; we want to win the league.  I know it’s going to be tough.  There are a lot of excellent clubs, the Big 3, and then some other great teams and the entire rest of the league.  It’s difficult, but I hope we can accomplish something big this year.

Do you think it’s possible to crack the Top 3?

MD:  I do – otherwise I wouldn’t play in Magdeburg.