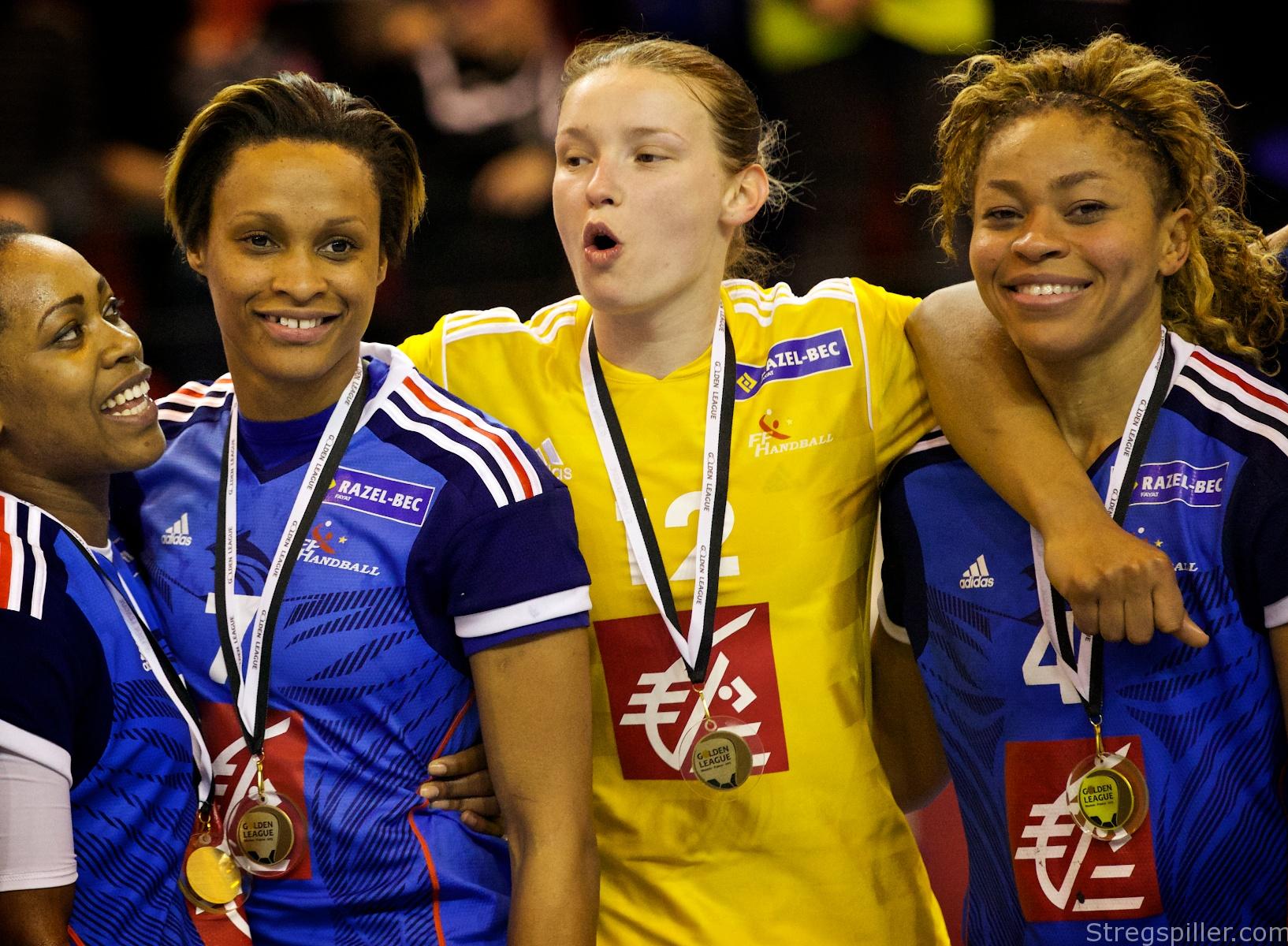 Part II of Heart of Handball focuses on “Challengers”, “Dark Horses”, the teams that have “Nothing to Lose” and “The Rest of the Handball World”.  Who will surprise on the upside?

Russia, France and Montenegro are the next best teams that will give any opponent “a run for their money.” All who had second thoughts – the squad of coach Evegeniy Trefilov is back in contention for the IHF’s highest award.  While Russia did not take part in the previous World Cup, the record champion is poised to add another trophy to its collection after winning the prestigious Mobelringen Cup.  Expect goalkeeper Anna Sedoykina, Ekaterina Ilina (center-back) and Ksenia Makeeva (pivot) do most of the heavy lifting as they try to find their way to Herning.

If France would have one more player with the qualities of Allison Pineau, all anxieties of head coach Alain Portes would disappear in a heartbeat.  Pineau is playing her best handball in years and her hang time while performing jump-shots rivals the one of her compatriot, Daniel “Air France” Narcisse.  Fortunately, the World Handball Player of the Year 2009 is one of a kind – an exceptional gifted athlete.  Coach Portes will have to look elsewhere in reviving France’s World Cup ambitions, after two successful attempts in 2009 and 2011 that ended with silver medals.

There are few worries, if any about Frances’ firepower – next to Pineau (center-back), Alexandra Lacrabere (right-back), Gnonsiane Niombla (left-back) and Siraba Dembele (left-wing) have all it takes to inflict serious damage on any opponent.  Right now, the make-up of Frances’ defensive formation is what keeps Alain Portes awake at night, especially the uncertain status of right-back and defense specialist, Camille Ayglon.  Portes intends to keep his cards close to the chest until the very last deadline has passed, before he makes his final call.  It is stability and leadership what the French coach is looking for  – veteran line-player, Nina Kanto can furnish just that after a timely recovery from her knee injury.  If Portes can arrange a steady defense, watch for Allison Pineau + Co. to take-off.

Last but not least, the team from Montenegro completes this elite group of “Challengers”.  It does not require the help of a crystal ball, predicting that the squad of coach Dragan Adzic will not turn into a fan favorite in Europe’s northern hemisphere.  Opinions are firmly set as most spectators and media representatives alike, do not appreciate the – sometimes extreme – physical play of the crew representing Montenegro.  It will not matter much.  Adzic’s team is used to the role of “villain” when playing away from home and it will take more than a hostile crowd, to push Milena Raicevic et.al. to the edge and beyond.  Is Adzic’s squad lacking depth?  At EURO 2014, his team was running out of steam and out of options in the semi-final and the bronze medal match.  Will – no, can Montenegro demonstrate improved staying power at the World Cup?  Taking the initial hurdle (i.e. reaching the 1/8 final) should not be a problem but how far can Katarina Bulatovic & Co. go?  Aside from star player, Bulatovic, Montenegro’s master coach will rely on the usual suspects (i.e. Milena Raicevic, Majda Mehmedovic, Suzana Lazovic, Jovanka Radicevic) and possibly two highly talented teenagers – left-back Djurdjina Jaukovic (18) and line-player Ema Ramusovic (19), to take the team deep into the tournament.  No pain, no gain – opponents will come to appreciate the motto that promises greater rewards for the price of hard work.

South Korea, Netherlands, Hungary, Poland all have the potential to join the aforementioned group of “Challengers” over night.  And there is no question that the rejuvenated Asian champion, led by head coach Young Chul Lim will be even stronger with a healthy Eun Hee Ryu (right-back).  A significant portion of the squad’s preparation took place in Europe and handball connoisseurs will be treated to a fast paced yet often unorthodox style of handball.  Could Korea go as far as repeating the 1995 World Cup success, twenty years later in Denmark?  Considering the frequency of games in recent history when Fortuna looked the other way (i.e. Gro Hammerseng’s last second goal in the semi-final match at the 2008 Olympics, the dramatic, double over-time win of Spain, taking the bronze medal at the 2012 Olympics, Jelena Eric’s buzzer beating score at the World Cup 2013 in Serbia), the squad from Korea is overdue to get a break.

There are plenty of reasons why Hungary should play a much better role at this year’s World Championship, compared to EURO 2014 when the squad enjoyed home court.  For one, playmaker Anita Goerbicz is back on the pitch and she will be well supported by the likes of Aniko Kovacsics, Zsuzsanna Tomori and Zita Szucsanszki, just to name a few of Hungary’s many capable players.  The weakest link?  It could well be head coach Andras Nemeth.  The match between Hungary vs. Denmark during the main round of EURO 2014 comes back to mind when Nemeth could not find an answer to coach Pytlick’s tactical finesse.

The Netherlands are ready to take the next step in their evolution but is the team up for it?  On paper it looks like it.  Estavana Polman, Lois Abbingh, Sanne van Olphen, Yvette Broch, Laura van der Heijden are all heading in the right direction.  The tragic injury of goalkeeper Jasmina Jankovich exposes one area that may not be as strongly developed as the rest of the team – goalkeeping.  Tess Wester and Marieke van der Wal may have a different opinion but they will require a defensive mechanism that works properly.

Quo vadis Poland?  Over the past week, Kim Rasmussen’s squad showed up strong when testing successfully against Germany and Montenegro, despite missing back-court star Alina Wojtas.  Are the ambitions of Kinga Achruk & Co. fully aligned with Rasmussen’s objective?  Can they bring the intensity to the court that their coach will bring to each and every game?  If the answer is “yes”, Sweden and the Netherlands will have their work cut out.  The crew from Poland could turn into a more disruptive force than most expect.

Germany, Romania and Serbia have much to gain and little to lose.  Obviously the decision of Andrea Lekic, Sanja Damnjanovic, Dragana Cvijic and Katharina Tomasevic to not play under the auspices of Sasa Boskovic have not helped the cause of Serbia.  It also takes away some of the glamour – simply put.  A championship without the 2013 World’s Best Handball Player (Lekic) and one of the best line-players on the planet (Cvijic)  is a bit “less World Cup” then it would have been otherwise.  Coach Boskovic will have to reach deep to make it all happen but it’s safe to say that a repeat of the 2013 triumph is entirely out of the question.

Germany had to deal with its own last minute resignation, when right-winger, Svenja Huber threw in the towel shortly before heading to, what would have been, her first World Cup.  She was missing respect, loyalty and honesty somehow and from someone.  In a recent interview broadcasted on Germany’s premier handball podcast, “Kreis Ab”, she stopped short of getting into specifics, leaving listeners on their own while assessing the chances of coach Vestergaard’s crew.  Like Serbia, Germany gained access to the World Cup in Denmark courtesy of an IHF Wild Card – a blessing in disguise?  Too early to tell.  After losing the World Cup qualification matches vs. Russia, Jakob Vestergaard did not see the need for some of Germany’s most experienced players (i.e. Anja Althaus (Vardar), Nadja Nadgornaja (Dortmund), Kerstin Wohlbold (Thueringer HC) anymore.  He brought the long proclaimed “generational change” forward and his squads (Olympic) hopes rest on two of the world’s best goalkeepers (Katja Kramarczyk and Clara Woltering) and a moody, star player – Susann Mueller (right-back).  Not enough – more has to happen to make the journey to Germany’s northern neighbor unforgettable.  Evgenija Minevskaja, Xenia Smits, Saskia Lang and Anne Hubinger could be the reason why such memories could become pleasant ones.

Finally – Christina Neagu returns to the location that she left as a bronze medal winner at EURO 2010.  A similar result seems to be out of reach at the outset of World Cup XXII.  While Romania’s sharp shooter enters the tournament in magnificent condition, her team lacks depth and maybe quality to repeat the triumph from five years ago.  Still, coach Ryde’s team is good enough to disrupt the order in Group D but it appears unlikely that Romania will move past a 1/8 final.