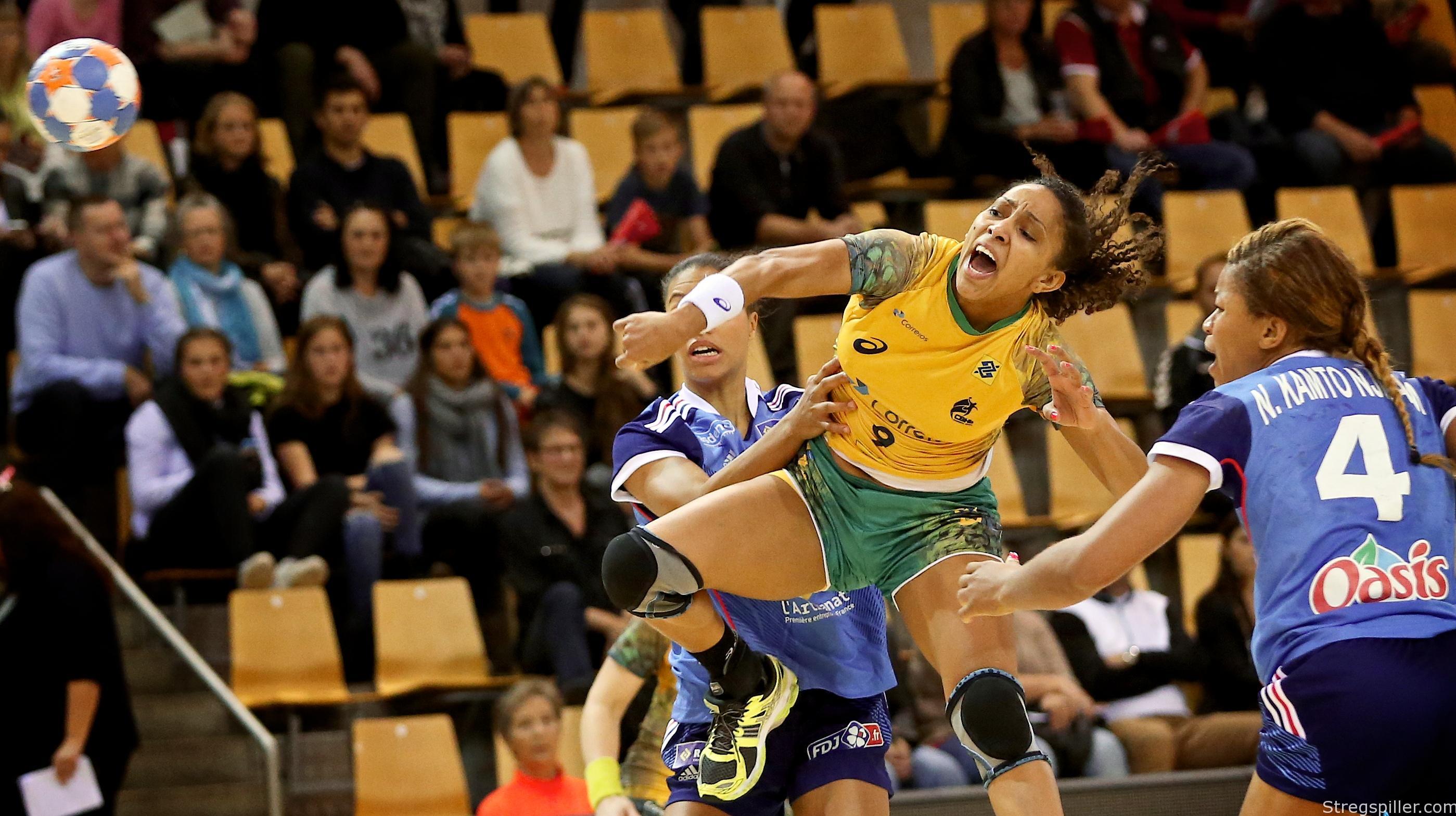 Heart Of Handball – Part I

In less than a week, the IHF’s 22nd women’s handball world championship will commence in the heartland of handball – Denmark.  Eighteen years after South Koreas success, it was Brazil that took the gold medal in Serbia, in 2013, beating the home team in a thrilling final in front of more than 19,000 spectators at Belgrade’s Kombank arena. The attendance on the final day of the tournament set a new world record for women’s handball that is likely to hold for years to come.  The squad of Danish coach Morten Soubak became the first country from South-America to win the trophy in a match that many experts considered the best women’s handball final ever played.  The competition in Denmark will set its own records and handball fans across the globe can look forward to one of the most hotly contested handball tournaments in recent history.  At stake: The world championship award and tickets to the 2016 Olympic games, in Rio de Janeiro.  As the teams are entering the final stage of preparation, it’s time to take a look at who is hot and who is not.  Part I features “The Champions”, “The Host” and “The Hunters” while part II places the spotlight on “Challengers”, “Dark Horses”, the nations that will have “Nothing to Lose” and the “Rest-of-the-World”.

Brazil, the reigning world champion and freshly minted winner of the PanAm games 2015, in Toronto (Canada) and Norway, winner of EURO 2014, are the obvious front-runners.  Any team planning for an appearance at Jyske Bank Boxen, on December 20th will need a thought-through strategy to dispose of the champions along the way.

There are no surprises – Alexandra do Nascimento (right-wing), Eduarda Amorim Taleska (left-back), Ana Paula Rodrigues Belo (center-back), Deonise Fachinello (right-back), Fabiana Diniz, Daniela Piedade (both pivot), and the goalkeeping duo, Barbara Arenhart and Mayssa Pessoa represent the backbone of a veteran Brazilian team that wants to show that the 2013 victory in Serbia was no coincidence. While some critics say that Diniz & Co. have moved past their peak, others are quick to point out that coach Soubak has cultivated one of the best defensive formations in women’s handball – possibly the most physical defense next to Montenegro – in front of two excellent goalkeepers.

Since their success in Serbia, Soubak’s players know that they can win “it” even under most adverse circumstances. Compared to the raucous and feverish atmosphere in Belgrade’s Kombank arena back in 2013, a final match in Herning’s Jyske Bank Boxen may be closer to visiting a sanctuary – albeit a retreat with a distinct Scandinavian feeling.  Becoming world champion number XXII necessitates beating one of the most experienced and well-rehearsed teams that will take to the courts in Denmark.  It also requires to out-smart one of the world’s best handball coaches and a fantastic motivator.  The team from South-America thrives on emotion – can Morten Soubak unlock the squad’s world-class potential again?

Unfortunately, Brazil’s preparation at home took a disastrous turn over the weekend – the test matches against Serbia and Slovenia had to be terminated pre-maturely. Torrential rainfalls in Brazil’s capital had caused leaks in the roof of Brasilia’s Nilson Nelson sports complex and the resulting humidity forced the cancellation of all games. An alternate schedule was drawn up for Sunday, when Brazil beat Serbia over 3 x 20 minutes 24:23.  Anything but ideal and a rocky World Cup start against Asia’s top team, South Korea, would not come unexpected.

Watch out for two of Brazil’s most talented players – left-back Amanda Andrade and line-player Tamires Morena Araujo.  Why?  See for yourself at Kolding’s Sydbank arena.

Much has changed when comparing team Norway with the squad that won EURO 2010 in Herning.  Only six players (Camilla Herrem, Nora Mork, Kari Grimsbo, Linn Jorum Sulland, Heidi Loke, Stine Bredal Oftedal) of the 2010 champion will try to find their way back to the town in the middle of Jutland for the final weekend.  Norway’s 2015 campaign will begin further north, in Frederikshavn, where Heidi Loke & Co. will face some stiff competition in Group D from the likes of Russia, Spain and Romania.

Norway’s goalkeepers (Kari Grimsbo and Silje Solberg) will experience a good dose of extra attention given coach Hergeirsson’s controversial decision to not call on Katrine Lunde – who most handball insiders consider the best goalkeeper in the world. Certainly, Norway’s coaching staff took a forceful and courageous view of what’s best for the team, with a reality check just around the corner.

Given the aforementioned circumstances as well as the absence of Ida Alstad and retiree Karoline Dyhre Breivang, the two players that will have to endure further scrutiny include Pernille Wibe and Veronica Kristiansen.  They will hold the key to whatever defense mechanism the IHF’s Coach of the Year 2014 has drawn up.  Can they deliver?  No doubt – but the line-player from Issy Paris and Midtjylland’s back-court star will have their work cut out from day one, on and off the court.

On the other end of the pitch, watch out for 169 cm of raw (handball) energy – Nora Mork.  Opponents have yet to find adequate measures to limit the effectiveness of Norway’s right-back over the course of 60 minutes.  Mork is in exceptional form and can decide games on her own – an inconvenient truth for any of Norway’s adversaries.

The Mobelringen Cup is a fixture in Norway’s handball calendar; a final stress test before major tournaments.  This year Russia, The Netherlands and Sweden followed the invitation of the Norwegian Handball Federation, joining them in Gjovik and Lillehammer.  Similar to years past, Hergeirsson’s squad showed room for improvement on the defensive end.  Considering the substantial changes subsequent to EURO 2014 (Breivang’s retirement, Alstad’s achilles injury, pregnancy of Linn Kristin Riegelhuth Koren ) not necessarily a real surprise.  The prominent answer to the question of, “Who will hold down the fort during crunch time?” has to wait until December 5th, when Norway meets Russia.

Can the absence of right-wing “Linka” Riegelhuth Koren be adequately compensated? Going by her performance during the first part of this year’s Champions League season, Amanda Kurtovic has provided some very encouraging signals – to say the least.  If Europe’s best team runs into problems, it won’t be on the right side of the court.

While the tremors could be felt earlier, it took until January 1 of this year before the era of Jan Pytlick, as coach of Denmark’s handball women, came to a halt.  The dismal result at EURO 2014 demanded a consequence, a new program and a new name – Klavs Bruun Jorgensen; one of the more controversial figures in Danish handball. While Klavs Bruun relies – for the most part – on the same core of players as Pytlick did, a fresh wind is blowing through handball’s heartland.  There is a distinct feeling of – “Can do!” compared to the previous “Can we really do?”  Denmark’s ambitious handball leader has his own ideas of how to innovate the game of handball; implementing defense modifications that have not all observers convinced yet.  No guts – no glory!  It could be the key to an unexpected Danish success story.

There is no “I” in team but one name sticks out and deserves mentioning – Rikke Skov. The highly decorated, handball legend has followed the call of Denmark’s new coach, interrupting her retirement from the national squad once again. The 1.81 meter tall, Viborg player has all it takes to lead her teammates deep into the tournament, on home soil.  If there is one individual that encapsulates Klavs Bruun Jorgensen’s relentless work ethic and winning mentality, the 35-year old defense specialist comes very close to it.

When “The Going Get’s Tough – Toft Get’s Going,” at least that’s what all Danish fans are looking forward to.  Goalkeeper Sandra Toft is yet another key success factor in Denmark’s run for precious medal.  After a soft start to the 2015/16 Champions League season with her club Larvik HK, more recently Toft’s performance is sharply trending upward.  Right on time.

Last but no least – team captain Line Jorgensen.  Before the season, she made her move from FC Midtjylland to join an All-Star ensemble at Romania’s capital club – CSM Bucuresti.  While “capital” has become a fleeting term in Bucuresti, Denmark’s coach may very well capitalize on Jorgensen’s prowess, especially when the game is on the line.  Looking for a “Go-To” player – Line Jorgensen should be one of the select few.

A week before Denmark’s opening match vs. Japan, Klavs Bruun Jorgensen took his crew to the south of Europe, preparing against Angola, Tunisia and host Spain.  While the outsized victories over Africa’s representatives were expected, the tie (25:25) with the vice-champion of EURO 2014 provided more meaningful insights regarding Denmark’s ability at World Cup’15.  Spain’s national team leader, Jorge Duenas, assessed the game as being played “on a high level” and from his perspective he preferred to see the “glass as being half-full.” For 57 minutes, it all went well for Eli Pinedo & Co. before Jorgensen’s squad caught up.  A comforting thought for team Denmark, considering the limited engagement of Line Jorgensen and general unavailability of right-back Louise Burgaard.

There are many good reasons why Spain is ready to take the final step and crown the diligent work of coach, Jorge Duenas.  Only a year ago at EURO 2014, the team came close to taking the big prize but once again it could not get passed Norway, despite a stellar performance of Nerea Pena.  It may well be different this time around.  Spains “Guerreras” are more than ready to go all the way.  A talented and experienced squad guided by an outstanding coach, who has proven that he can form a winning team, deserves to take the final step.  Can they continue where they left it off at the London Olympics in 2012?  In an epic, double over-time, bronze medal match against South Korea, Marta Mangue & Co. showed it all – purpose, willpower and determination.  Seeing Spain lifting the World Championship trophy on December 20th would not come as a surprise.  The time is right.

Not an easy task considering the overall quality of the team.  But watch out for Nerea Pena, Alexandrina Barbosa and Darly Zoqbi de Paula making their presence felt.

The crew of coach Thomas Sivertsson must be ranked right next to Spain in the race for gold, given the strong performance in Hungary and Croatia at EURO 2014, winning the bronze medal in convincing fashion.  Aside from the uncertainty if a recovering Linnea Torstenson will be able to join the squad in time, is the question if team leader Sivertsson is the right man at the right time?  Over the summer Sweden’s co-head, Helle Thomsen, called it quits – surprisingly.  A “difference of opinion” was cited as the main reason for Thomsen’s premature exit.  One year before EURO 2016 on home soil, team Sweden will have to provide some answers on the handball field, assuring officials, fans and itself that Thomsen’s departure wasn’t a step in the wrong direction.

How far will Sweden’s playmaker, Isabelle Gullden, take her teammates this time? Judging by her own performance since joining CSM Bucuresti in the summer 2015 – very far.  All the way to Herning for a final appearance on December 20th?  Little doubt that she is ready for it but who else will follow her lead?  Helping hands will be supplied courtesy of Jenny Alm, Johanna Ahlm, Louise Sand, Nathalie Hagman, Jamina Roberts and Johanna Bundsen, just to name a few more good reasons why Sweden should be considered a serious contender for winning it all.