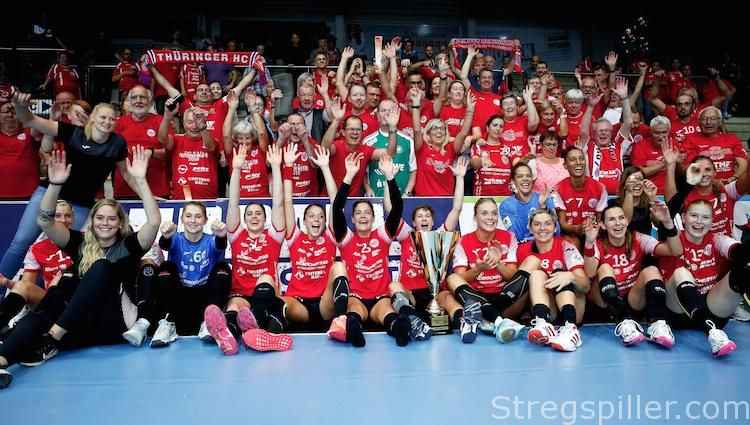 stregspiller.com – MATCH OF THE WEEK

PREVIEW – While Bietigheim lost their last chance to reach the main round of the EHF Champions League last weekend, Thüringer HC kept their hopes alive.

After the imposing 31:23 win against Podravka, THC is the only German hope for the next Champions League phase in 2019.  Still, the German champions are not in charge of their own destiny, when they received Krim Ljubljana, on Saturday afternoon.

Thueringer HC don’t have the future in their own hands.

In case of a Krim victory, it will be all over for the German champions, but a draw or a win for THC, will keep the door open and the club will have to wait a few hours, for the outcome in the match between Györ and Podravka.

Krim are already in the main round, but this does not mean that the game is without importance for the Slovenian champions.  Expect the squad of coach, Uros Bregar, to fight hard to assure maximum points for the next phase of the competition.

THC delivered an impressive performance in Croatia, last Saturday, when they beat against Podravka Vegeta.  In fact, the upward trend of the German champions´ began already in the previous match against Györ, when they were able to compete with the odds-on favorite all the way, only lose 31:28.

Krim come off a 32:23 defeat at home against Györ.

Very simple – for THC a ticket to the main round and for Krim to take as many points to the next stage of the EHF Champions League as possible.

Against Podravka, it was Dutch goalkeeper, Zimmerman, who performed wonders for THC, while Giegerich followed her example with an excellent performance against Borussia Dortmund, in the Bundesliga match, on Wednesday.

THC coach, Herbert Müller, can be happy having two talented keepers at his disposal, and with all due respect to Marincek and Vojnovic, the goalkeeping position is a big plus for THC.

Jakubisova has not drawn as much attention in the Champions League this season, as she has been recovering from injury for quite some time.  Instead Alexandra Mazzucco has taken to the limelight.

Ristovska (Krim) is a right wing on a high international level, but she has not been as dominant as expected after her arrival from Vardar.

Stolle is one of THC’s rising stars, and she is one of the key players, Germany´s Dutch national coach, Henk Groener, will rely on at the upcoming European championship, in France

Gnabayou has been around in the world of handball; but the French right-back is not on the level she once was.

With her 34 goals so far in the Champions League season – 10 goals against Podravka last weekend – Iveta Luzumova, still is THC’s most powerful player.  The Czech international is an indisputable force on the court.

Despite only 20 years of age, Emily Bölk is yet another key player for THC as well as the German national team, while Lang guarantees much needed experience.

However, this duo is up against a highly skilled pair of left backs in the form of Tjasa Stanko and the talented Greek, Lamprini Taskalou.  Stil…

THC have not been scoring many goals from their left wing position in the Champions League this season – 12 to be exact.  However, Baric and Amon have not impressed either.

The skilled Austrian/German pair on the line for THC will undoubtedly enjoy the upper hand against Ukrainian, Olga Perederiy.

His experience paired with his tactical understanding of the game, are qualities difficult to find, but Bregar may just be one of those few who can keep up with him.

Krim’s young coach possesses many of Müller´s attributes as well, and even though some may disagree, I call this a draw.

Considering the above, plus an enthusiastic “Rote Wand” in Nordhausen’s Wiedigsburghalle, all but assure THC’s success, on Saturday.  And if Györ will do their duty – defeating Podravka – THC will find themselves in the main round of the Champions League, when all is said and done.