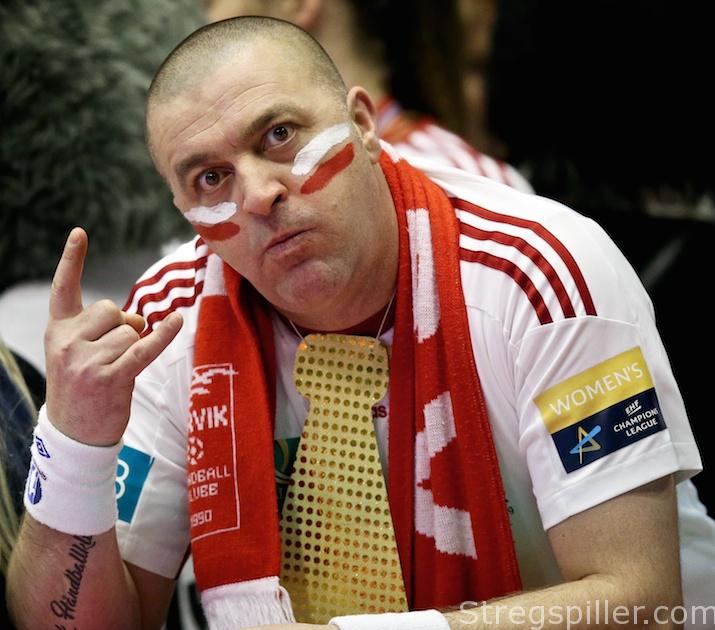 COLUMN – Are handball fans in certain parts of the world – especially, in some Western European countries – too nice to their opponents?

Would the home teams get more points, if the spectators were more “vicious” towards the visiting team?

Some words from Larvik´s coach, Tor Odvar Moen, got me thinking.

Before Larvik´s home match against FC Midtjylland in the Women´s Champions League this past Saturday, the club´s head coach, Tor Odvar Moen, made a remarkable appeal to the home crowd.

He asked for more support from the spectators in “Boligmappa Arena” – more than usual.  But here comes the part that’s noteworthy.

“Put pressure on the visiting team.  That is not unfair, it is expected, and it is like that in all arenas around Europe,” he said on the club´s website, and he even added:

“Be impatient.  Put pressure on the referees.  Show it when you want them to call passive play, show them that you disagree with questionable decisions.”

“I realize that this may be seen as being politically incorrect in our part of the world, but that’s the way things are in the arenas that we visit all over Europe,” said Tor Odvar Moen.

He is absolutely right that booing and jeering at the opponent is generally seen as undesirable behavior in certain parts of the world, especially in Western and Northern Europe.

Teams from these countries are at a disadvantage, when they meet clubs that nurture a different fan culture.

Tor Odvar Moen could probably tell more than one story about this, as his team just returned home from a game against CSM Bucuresti, in the Romanian capital, when he wrote the words above.

In Romania, the home crowd shouted “no – fair” in an effort to support their team while putting as much pressure as possible on Larvik and the referees.

This is okay and should even be welcomed, in my opinion.  Of course, I do not advocate for any hostile attitude or even throwing things – like coins, lighters, even knives or mobile phones (!) on the court.   Yes – it all has happened before.

However, as long as people use their voice – to put pressure on the visiting team and the referees – and their hands for applauding their own squad, I see nothing wrong with fans that may be labeled “fanatic”.

In Hungary, Romania and the former Yugoslav countries, fans are particularly good in supporting the home team while putting maximum pressure on opponents and referees.

But there is a difference in the way this behavior is expressed and exercised.

As I said before, I am absolutely not in support of throwing objects on the court or jeopardizing the safety of players or referees.

I have been to arenas, where I have encountered a very obvious and hostile atmosphere.  This is, of course, not what we want!

As an example of fan behavior that I endorse, I would like to mention Hungarian fans.

What I describe next is an observation based on personal experience.   I have come to know Hungarian supporters as extremely loud and enthusiastic, but almost never being hostile.

Some years ago, after covering a Champions League match between Kolding and Veszprém – when 240 Hungarians upstaged the noise level of 2,500 local spectators – I interviewed Veszprém´s Serbian goalkeeper, Dejan Peric, who dominated the match.

Outside Veszprém´s locker room, a large group of Hungarian supporters had gathered, saluting each and every-one of their heroes loud and clear, as they were leaving.

However, as soon as they saw me approaching with my voice recorder, they went silent immediately and remained so for the entire interview.

Not until I shook hands with Peric, thanking him for his time and answers, did they resume their noisy celebrations.

This is what I call fan culture at its best.

In Scandinavia, however, the arenas are often the opponents´ second home ground.

As a Danish club official once told me: “It is as if the spectators think they are attending a church service, not a sports event!”

In Sweden, spectators are even clapping, when the visiting team is in attack. That really makes the opponent feel at home.

In Denmark and Norway and some other countries in Western Europe, home crowds are also friendlier to the visitors than they have to be, and all of it supports the words of Tor Odvar Moen´s at the beginning of this article.

Not being “fierce” enough – in the most positive sense of this word – you give your club a disadvantage against teams with fans that are more vociferous and possibly more organized.

However, the relatively new trend of playing music during a game, is not exactly encouraging a supportive atmosphere that comes naturally.  Could you imagine music being played while Bayern Munich were attacking against Dortmund, or Liverpool against Arsenal?  I think not.

During the 2014 Men´s European championship, Danish coach, Ulrik Wilbek, made this appeal to Danish fans:

“Please put those “clapping sausages” under your seats and use your hands instead.  You make much more noise that way!”

He was right, and I was under the impression that these “instruments” were on their way out, but at the Women´s European championship in Sweden back in December, I saw them back in action, in alarmingly large numbers.

The request to handball fans all over the world should be:  Use your voice and hands in support of your team.  Keep coins in your wallet and lighters in your pocket.

Follow the advice and your team is bound to gain from it – and do not forget these wise words from Tor Odvar Moen either:

“Everyone should be treated with respect, and we should appreciate their effort once the match is over.  Even though we feel it being on the road, after a match, we get applause almost everywhere – even if we have defeated the home team.”