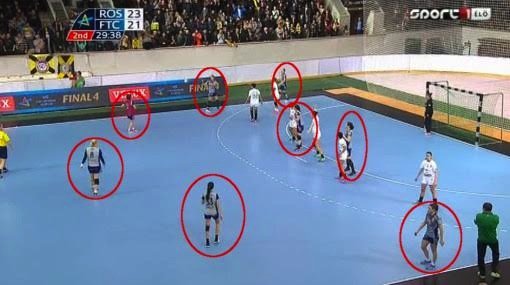 Match of the Group

Aside from Group 2’s Buducnost, Rostov-Don and FTC Railcargo were the only unbeaten teams in the 2015/16 Champions League edition, so far. In fact, the Russian champion had yet to lose a point. Jan Leslie’s squad entered the competition with eight of eight possible points.  Rostov had to replace line-player and defensive stronghold Kseniya Makeeva who was missing in action while FTC’s coach Gabor Elek did not have to deal with any major injuries and could present his strongest formation.

The opening minutes were characterized by hasty, poorly executed plays on both sides.  Defense was dominating and the goalkeepers on either side were able to show off their skills.  Especially, Katrine Lunde left a strong impression saving 33% of all balls that came her direction.  Back-court star Ekaterina Ilina and right-wing Julia Managarova were Rostov’s strongest forces on the other side of the court whereas the Russian champion’s left-backs (Vladlena Bobrovnikova and Regina Shymkute) could not make any significant contributions in a match that was hard fought from the very beginning.  It was a slow grind but by the 10th minute Rostov had established a 2-goal lead for the first time (4:2).  Jan Leslie’s crew would not surrender the advantage anymore.  At half-time his squad was leading by two (13:11).

The second period was almost a mirror image of the first thirty minutes.  The defensive formations of the two teams did not allow many goals while Katrine Lunde stopped several Hungarian shots fired from close range, increasing her savings rate to a whopping 38%.  In the end her performance made the difference and assured Rostov’s victory.  By the time line-player Mayya Petrova fouled out (58th minute), the game was decided and Rostov’s winning streak remained intact.

With 22 seconds left on the game clock, Rostov sent eight field players on the pitch, undetected by referees, officials and coaches alike.  The violation did not draw any penalties. Call it a new form of home court advantage?!

As mentioned above, Katrine Lunde was playing in a class of her own and her fantastic performance single-handedly guaranteed Rostov’s success in a game that wasn’t pretty to look at.  Too much was at stake.

Jan Leslie: “We were prepared for the Hungarian team.  We took Pena and the line-player out of the game that’s why we received a lot of goals from the wings.”

Katrine Lunde: “It was a game with lots of mistakes, a lot of fighting.  It was very hard – so now, I want to go home and rest.”

Nera Pena: “Lot’s of tactics in the match but we are happy that we put up a good fight against a good team like Rostov – we are trying to make it better when we meet again in Budapest.”

It’s almost certain that Jan Leslie’s squad will be the winner of Group 1 following the victory against FTC Railcargo.  Even a loss in Budapest will not change this outcome.  It’s hard to see how Katrine Lunde & Co. would surrender additional points versus Thueringer HC or Fleury Loiret.  At this point, it’s pretty much a done deal for the Russian champion – Pozdravleniya!

Larvik entered the Champions League main round with four points but the club’s main concern was circling around the well-being of goalkeeper Sandra Toft who reportedly suffered a slight concussion in Denmark’s 2015 world cup quarter-final match against Romania, when a shot from Christina Neagu hit her straight into the face.  Thueringer HC had its own share of injuries throughout the season and the team was arriving at Larvik’s Bolligmappa Arena following a Champions League loss against Fleury Loiret only days earlier.  Three tough games within a week in addition to some meaningful travel stress should show its toll and it did.

Given the health status of Sandra Toft, Larvik’s head coach Tor Odvar Moen had picked Alma Hasanic in goal – a decision that would pay dividends.  Aside from Hasanic, Kristine Breistol began the match in the left-back position for the 2015 Champions League finalist.  Goalkeeper Dinah Eckerle was once again in the starting line-up of Thueringer HC.  While the teams were stretching and warming up to the tune of Queen’s “We will rock you”, coach Mueller did not know that his squad would be “rocked” indeed.

Unlike days before when Thueringer HC had an impressive start in Orleans against Fleury Loiret, this time around the German club would not score until the 9th minute.  At that time Gro Hammerseng-Edin & Co. were leading 6:1 already.  Half-way through the first period, Larvik had built that lead into a seven goal advantage (10:3) and by the time when Thea Mork converted a spectacular Kempa trick from left-wing (12:4), off a pass from sister Nora, the game was effectively decided.  The women around playmaker Kerstin Wohlbold were not able to exert enough pressure on Larvik’s defense.  Poor passing and numerous unforced errors characterized the game of coach Mueller’s team.  When he called his first time-out he reminded his players to show more courage and demanded them to fight their way back into the game.  Thereafter, Eckerle traded her place with Jana Krause; things got better but not by much.

Five minutes into the second period, Thueringer HC was able to capitalize on Larvik’s lack of concentration while cutting the deficit to five goals.  But 10 minutes later the margin of difference was extended to eight in Larvik’s favor once again (20:12).  The second half highlight was provided courtesy of Alma Hasanic when she stopped two consecutive 7-meter penalty shots from Svenja Huber.  It has to be said that Thueringer HC with the excellent support of keeper Jana Krause did their best to avoid a Larvik landslide victory.  Especially, coach Herbert Mueller did not grow tired of reminding his players to stay focused, fight and keep up the pace.  On this Saturday, the club from the east of Germany could not do much better but expect a different performance when the two teams meet again on February 14 in Nordhausen.

There was not much to argue – Alma Hasanic showed a superb performance between Larvik’s goal posts.  In the end her savings rate stood at 51%.

Larvik’s two matches against FTC Railcargo will be key in determining the club’s path towards another Final4 appearance.  A handball heavy-weight will wait in the quarter-finals – that’s a given already.  Gyor, Buducnost, Vardar, Bucuresti – possibly Midtjylland?  Thueringer HC should aim to win its remaining games and hope that Fleury won’t collect more points in order to qualify for a quarter-final.  A tall order?  Yes – by any stretch of the imagination.