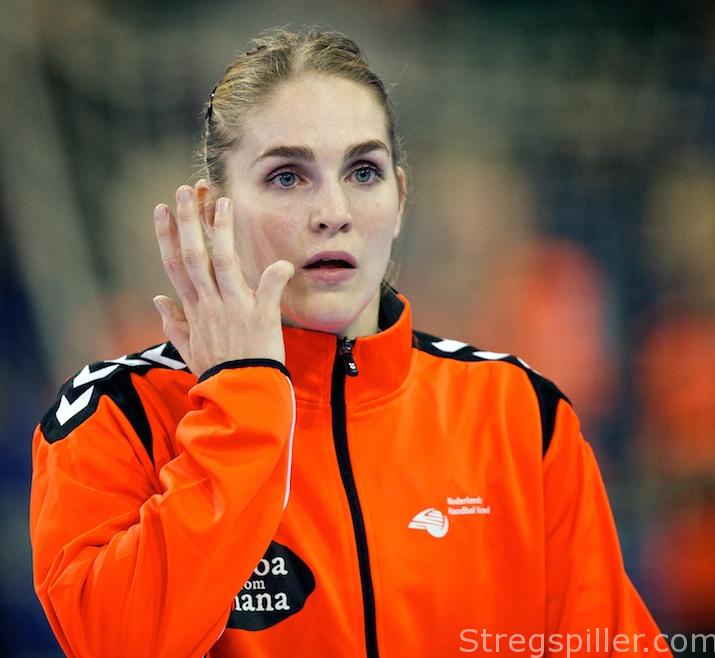 “I hope this will be my year”

INTERVIEW –  Laura Van der Heijden hopes that this will be the season, where she and her new club, FTC, will reach the Champions League FINAL4, and win a gold medal with the Dutch national team at the 2017 World Cup.

In this exclusive interview with stregspiller.com, she reveals that there have been a few things to get used to after leaving Danish Esbjerg.

Transferring to FTC-Rail Cargo Hungaria – formerly known as Ferencvaros – Laura Van der Heijden joined a club that has been struggling for a long time to reach the “promised land” – the Women´s EHF FINAL4.  So far without any luck.

Ever since she joined the Hungarian club at the beginning of this season, the 27-year-old right back has been experiencing this desire to be a part of that final weekend in Budapest, in May.

“To play the FINAL4 is obviously a goal.  I hope we will make it this year, but there are so many good teams in the Champions League that you can never predict it with certainty.  All we can do is train hard and give our best,” says Laura Van der Heijden.

Stepping out of the shadow of Györ Audi ETO KC, in the Champions League as well as in the Hungarian league is the name of the game.

“First of all, I think it is great that we play with Györ in the same league.  Competing against such a good team is always nice.

“Of course, they won the Champions League last season, so we know they have a great team.

“Yet, in sport anything can happen, as we all know, and therefore it will be possible to win against a strong team like Györ on a given day, where everything falls our way.   So, we have definitely not given up hope stepping out of their shadow, in the Champions League and in the national league as well,” says Laura Van der Heijden who joined FTC after three years in Esbjerg, a club she won the Danish championship with in 2016.

“I had three outstanding years in Esbjerg, and winning the Danish championship was just fantastic.

“However, I wanted to experience something new and learn new things.  And I found that moving to a new country and play in a different league was the best for me going forward.  The fact that FTC play in the Champions League made the club very attractive to me.

“Furthermore, my national teammate, Danick Snelder, who has been playing there already, told me a lot of positive things about the club.

“She has also helped me to settle in, translating what we do in training.

“Outside the handball court, she also knows all the good restaurants in Budapest,” explains Van der Heijden who has no regrets about her move, so far.

“FTC as well as Esbjerg are very professional and well organized clubs.  They both have excellent training facilities and everyone involved on the club level simply breathes handball.  In this respect, it was not much of a change for me.

“When I arrived here, everything was arranged, and I can focus on playing handball,” says the experienced Dutch international who admits that there have been many new elements to get adjusted to during her first months in a new club and another foreign country.

“Yes, there have been a lot of new impressions – I have to learn a new system and a whole new style of playing handball.  But my new teammates have been really good in helping me.

“I am also busy learning Hungarian and I take private lessons twice a week.

“Fortunately, I also have the opportunity to enjoy Budapest as a tourist in between matches.  It is a very beautiful city, and I very much enjoy living here.”

She is the only left-handed back court player on FTC’s roster right now and she has been playing an important role in the team from the start.

“With a left-handed back court player, you obviously play differently than you do with a right-handed player in this position.

“Until now, I have played a lot, and I feel that I fit in with the team´s playing style.

“FTC like to play fast, and this is easier with a left-handed right back.  Everybody on the team plays for each other and tries to create free space, which also suits me well.

“My role is the same as the for the other back court players – seek one-on-one situations,  create my own shot opportunity or find an open teammate.  All of it has turned out really well thus far.”

Back to where it all began

While the Women’s Champions League will spring back into action this week, another even bigger event is coming up soon for Laura Van der Heijden.

In December, she and her teammates will compete in the 2017 World Championship, in Germany.

The tournament will bring her back to the country, where her foreign career began, as she spent four years (2010 – 2014) with Bundesliga club VfL Oldenburg.

The Netherlands are not going to play in Oldenburg, still Van der Heijden is hoping for some support – except for the match against the German host, of course.

“I spent four very good years in Oldenburg, and I met a lot of nice people, and many them even came to see some of my games after I moved to Denmark.  Obviously, I hope for some of them to come and support my team in Germany as well.

“By the way, I find it very cool that the World Championship is taking place in Germany, as it means that family, friends and fans will not have to travel far to support us.”

At the most recent World Championship, in Denmark, in 2015, the Netherlands won the silver medal – an achievement they repeated at the European championship in Sweden, last December.  In both games they were defeated by Norway.

To no surprise, Van der Heijden and her teammates are hungry to take the last step, to reach the top of the podium this time around.

However, she also expects the competition for precious metal to be much tougher than ever before.

“No doubt, there are some fine teams that all want to win a medal and preferably the golden one, but we are going to give everything we have to take the gold medal this time.

“We realize that we will have to play our very best handball in almost every game, and that it will take a lot of hard work.

“And we will need to keep our focus all the way, but we are ready,” says a confident Laura Van der Heijden.