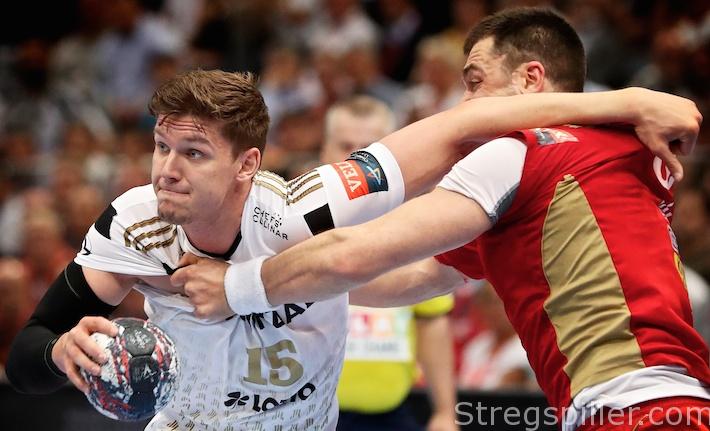 INTERVIEW – German international Christian Dissinger is still just 24 years old, but already has a ton of experience.  He won the world junior championship in 2011 earning MVP honors, moved to Switzerland when he was 19 years old and signed with cash-strapped Atletico Madrid.  Yet, he never played for the club as management announced bankruptcy right before he could even hop on the plane to the Spanish capital.

He also suffered two torn cruciate ligaments, working his way back while playing for lowly ranked TuS N-Lübbecke in the DKB Handball-Bundesliga before moving to one of Europe’s handball powerhouses, THW Kiel, this last summer.  All of it has led to Dissinger becoming very thoughtful, but thankfully he doesn’t mind talking about what’s on his mind.  He also doesn’t shy away from criticism, in this case not agreeing with some of the new handball rules that go into effect at the Olympic games in Rio..

Q: The 7th player on the court doesn’t need to wear a bib anymore, while replacing the goalkeeper.  The game might change for good.  How do you feel about it?

A: I think so as well.  Some teams will rely a bit more on it than others.  It will also be quite confusing for everyone involved.  I’m not too enthusiastic about it.  Sure, a 7th player is nice to have, but I think the old rule was perfect.  When everything is moving fast, then you won’t be able to play as a keeper, like some did last year.  I’m not fan of it, but it’s a change you have to accept.  I hope it’s not forever and it (the rule ed.) may be revoked again after some time of testing.

Q: Another big change addresses potential “acting”, which isn’t typically a part of handball, but still the rule-making board opted for a change.  In case you need to be treated by medical staff on the court, you have to get off the pitch for three ball possessions while your team plays offense.  There’s hardly anybody in the world of handball that is really in favor of this regulation…

A: I think the rule is complete nonsense.  It also depends on the punishment by the referees.  If there’s a yellow card or a two-minute suspension then the rule is off, otherwise the rule is on.  So it depends on the judgment of the referees again.  I cannot understand it at all.  Then there has to be someone at the scoring table who will count.  And these people already got a job to do.  I understand that they want to get rid of acting, but you could do it in a different way.

Q: Did you talk about it with your teammates, what do they think about it?

A: We didn’t talk about it that much, to be honest.  We talked about it when we first heard about the new rule, but nothing in particular.  I don’t know anybody who found a pro-argument for it.

Q: It’s not inconceivable that players, who are really injured, deny the treatment so they can stay on the court, which would increase the risk of more severe injuries…

A: That’s true – it could be possible.  I can’t really tell.  Sure, there are some players who tried to act, especially during crunch time in close games, so there’s no fast break – but the “advantage-rule” was quite useful.  I think the new rule is useless.

Q: Yet another new rule takes care of “passive play”, six passes will be allowed once the referee lifts the arm.  A shot clock might have been an option.  What’s your take on it?

A: Well, the idea looks okay, but I would have preferred another solution – maybe a 5-second rule once the referees have signaled passive play.  I guess it’s all right, but I think a test would have been nice, because it’s still very much in the hands of the referees.

Q: Do you think there are too many changes?  Handball is a quite nice sport to watch as it is.

A: They are always trying to change something.  It has worked out most of the times.  Actually, it’s hard to say because the new rules might have been tested in a youth system or in countries that are not big handball nations.  Now, a lot of changes are implemented at one time.  We have to see how much impact the new rules will have on the game.