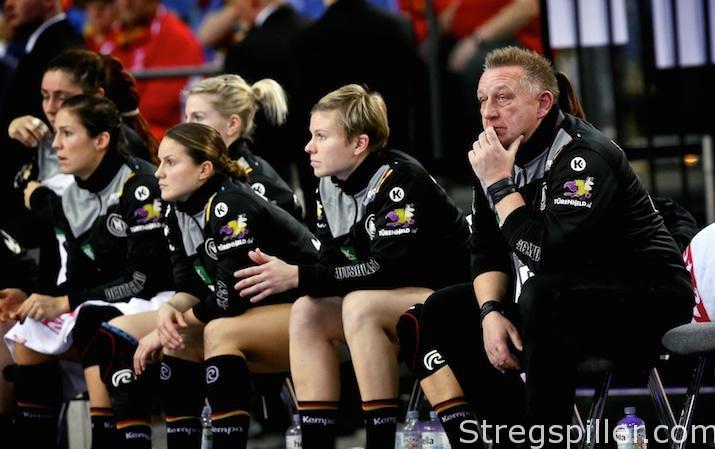 On Sunday the first four quarter-finalists, were determined and once again it was another day of surprises.

It was also the day, when host Germany were sent out of the tournament.

France reached the quarter-finals of the 2017 World Championship as the first team.

The Olympic silver medalist was in the driver´s seat all the way against Hungary.

The most recent matches were testament to Hungary´s revitalized attack, obviously benefitting from the return of Zita Szucsanski. In this match, however, she was in no position of providing Hungary a real chance to reach the quarter-final.

Neither was Blanka Biro, although the young goalkeeper performed well and did not disappoint.

France took the initiative from the start, and led 2:0, 3:1 and 6:2.  A timeout called by Hungary’s coach, Kim Rasmussen, 13 minutes into the game did not stop the French who maintained a three goal lead for the rest of the first half.

The pattern did not change after the break, as France were constantly leading between three and five goals.

Kim Rasmussen tried to disrupt the French offense by pushing Anita Görbicz forward in a 5-1 defense, but this step came too late to have any meaningful effect on the game. France proceeded to a three-goal win that was never in doubt.

“We never found a way to stop the French – we were chasing them all the time without catching up.

“They were simply smarter than us,” Rasmussen realized after Hungary’s exit from the World Championship.

Apart from their 31:24 opening win against Denmark, the Montenegrin team did not leave a convincing impression during the group phase, when only a draw against Brazil, in their last match, earned them access to the Round of Last 16.

This afternoon, however, it was a different Montenegrin team. It brought back memories of the semi-final between the same two nations at the 2012 European championship, in Serbia.

Back then, in front of 13,900 spectators, which was a world record attendance for women´s handball at the time, Montenegro won and went to the final.

On this Sunday in Magdeburg, Montenegro succeeded again and booked the ticket to the quarter-final – fully deserved.

It looked as if Team Serbia were simply not prepared for Montenegro’s way of playing handball.

Nor were the Serbs able to do much about Katarina Bulatovic´s left handed shots from distance. Radicevic and Bulatovic accounted for nearly half of all Montenegrin goals.

Serbia tried a 5-1 defense, but it did not bother Montenegro’s attack too much. Their defense also worked better compared to previous matches, and when the Serbs were threatening to cut the deficit, Alma Hasanic put up some timely saves.

Only in the very last minutes, Serbia were able to reduce the gap, but their last ditch effort came way too late, to have an impact on the final outcome of the match.

The World Championship will continue without the host.

In front of 4,133 spectators at Magdeburg’s Getec Arena, Denmark left not doubt which team would leave the floor as the winner. In the second half, the match came close to humiliating the German team in front of their home crowd.

However, it was not Bodholt who became the deciding factor in a clear and deserved Danish win.

Goalkeeper Sandra Toft performed at a world-class level behind a defense formation that became better and better as the first half progressed.

Line player Kathrine Heindahl also had a world-class performance at both ends of the court along with Mette Tranborg on right back position.

Germany, on the other side, left a disappointing impression.

The hosting team was lacking ideas of how to spread an aggressive and flexible Danish defense, and for long stretches of the match, the German backcourt line did not exist.

Clara Woltering in goal did what she could keeping her team in the game, but she fought on her own.

Germany had their last lead at 5:4, before the Danes pulled away via 8:5 and 10:6, taking a four-goal lead at half time.

Denmark’s dominance continued after the break, when the Danes got up by seven goals (20:13), before Germany were allowed to create a more acceptable result.

The match was also an opportunity for Sweden to avenge the defeat against the very same opponent at the European championship on home, ground one year ago.

To cut a long story short, Sweden took revenge, as they demonstrated that their 31:28 victory against Norway in their last group match was no coincidence.

Johanna Bundsen in Sweden’s goal took the self-confidence from Slovenian shooters, and her teammates were benefiting from the opportunities her many saves provided for.

Already in the first half, Sweden were leading by seven goals before finishing the game with a double-digit margin.

France appears to be the favorite against Montenegro, while the Scandinavian clash between Denmark and Sweden appears to be more open.

Both matches will be taking place at Arena Leipzig, on Tuesday, December 12, 2017.