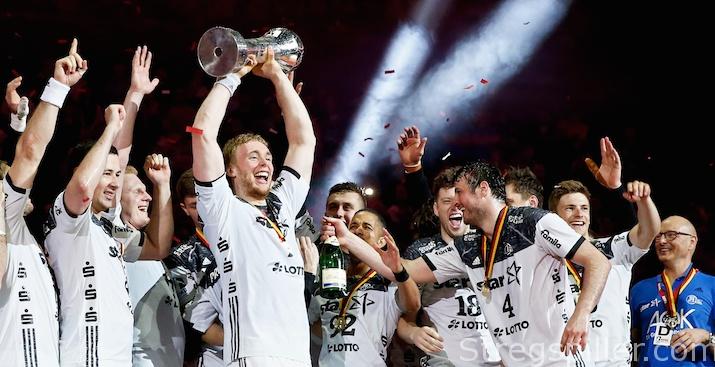 It has been said so many times: “Offense wins games, defense wins championships.”  Sunday’s final between the THW Kiel and the SG Flensburg-Handewitt proved – once again – the old adage.  On Saturday, the front-runner in the German league – SG Flensburg – totally demolished the reigning German champion Rhein-Neckar Löwen 33:23.  On Sunday, record cup winner Kiel practiced a stellar defense effort, taking home the cup with a score of 29:23.

Kiel’s “Zebras” (almost) cruised to the title, even though the half-time score of 13:12 suggested otherwise.  But throughout the second half you could see how much the players were longing for a title after going through a 2015/16 season without a trophy and especially after missing the Final 4 in Hamburg since their last cup win in 2013.  Prior to the match, many had Flensburg as the favorite, but Kiel could not be underestimated, under any kind of circumstance.

Kiel head coach, Alfred Gislason, surprised his counterpart Ljubomir Vranjes by starting the game with two left-wings.  While Austrian Raul Santos played his usual position, Rune Dahmke was used as center-back.  And his quickness caused problems for the usual quite mobile defense of SG Flensburg.  As it turned out, the move paid off.

And while Kiel’s risky move worked out, coach Vranjes, who rarely makes tactical mistakes, had problems finding the right answers.  His squad wanted to leverage their biggest strength – a combination of skill and speed, but THW’s massive defense, anchored by Patrick Wiencek and Rene Toft Hansen, just didn’t offer too many chances.  And shooting low on Niklas Landin, who’s known to be tremendously quick even when considering his height, was not the best idea in the world.

The Dane, who had replaced Andreas Wolff during the first half of the semi-final win against SC DHfK Leipzig, shut the door various times on Flensburg’s players.  When he saved a fast-break by Kentin Mahé way into the second period the game was over.  And Flensburg knew it.  Vranjes didn’t react in time when he needed to.  Sure, Mattias Andersson didn’t concede many goals, but his saves were missing.  Inserting back-up keeper, Kevin Moller, earlier might have been a good solution, who knows.

The same goes for Serbian Petar Djordjic.  He responded by scoring from distance on his first two shots, but it was too little too late with just 15 minutes left in the game when he entered the court for the first time.  A key-issue for Flensburg ever since Michael Knudsen left the club is the line-player position.  Both Jacob Heinl and Hendrik Toft Hansen are capable and strong in defense, but are nowhere close to being a world-class pivot, like Kiel’s Patrick Wiencek, for example.

And last but not least we have to talk about Domagoj Duvnjak.  The Croatian sensation will have season-ending knee surgery soon, but scored a game-high seven goals nonetheless.  What more can we say about his leadership qualities, his willpower and outstanding handball skills?  Kiel will miss him for the remainder of the campaign and may have won the cup at a dear price.  Who knows exactly when he will be back and if he can ever reach the same high level that he is used to.

At this point, I just have to remind you of Filip Jicha, who played through a whole season injured.  He has never been the same since.  This past weekend, Duvnjak played through obvious pain.  He’s too proud of a person (and player) to miss out on games like the one against Flensburg. Let’s just hope he won’t join the Czech as yet another superstar paying the price for a vicious match schedule.

For now, he should enjoy the cup win with his buddies, as it’s well deserved.