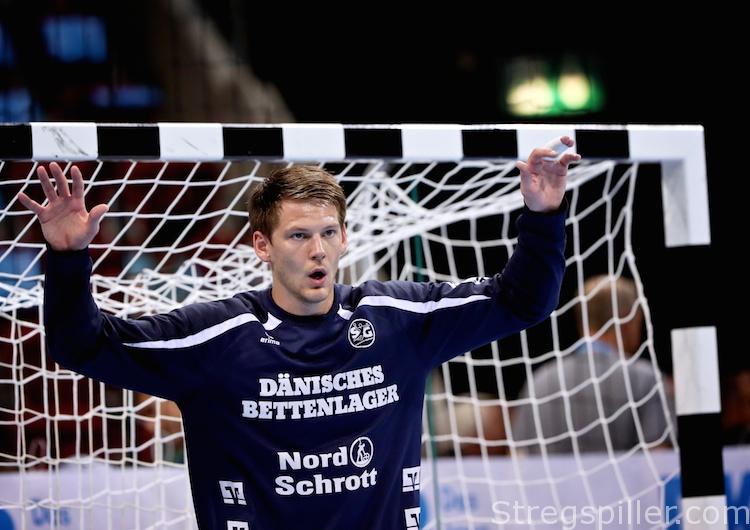 “I am just looking ahead”

INTERVIEW – He is considered one of the biggest talents on the goalkeeper position in all of Europe and prior to this season he transferred from Danish Holstebro to the German champion, SG Flensburg – meet Torbjorn Bergerud.  Following his new team’s 33:26  loss at the 2018 PIXUM Super Cup in Duesseldorf, he had this to say.

Before we talk about yourself let’s speak a  bit about your match against Rhein-Neckar Löwen. You can’t be satisfied with the result?

TB: No, we are not happy. It is never fun to lose matches especially, by seven goals – it’s way too much.

Did you expect it? You had a tough loss against Kiel during pre-season and considering that six of the seven starters from last year played most of the game, I expected a closer outcome.

TB: I think the match was close for a long time, but in the second half we fell behind.  We were always trying to catch them but overall a defeat by seven goals was a bit too much. Still, seven goals are seven goals.

You had a great run over the last couple of years together with the Norwegian national team. But you are a rather young goalkeeper with a lot of time ahead of yourself to develop further.  At the same time you’re joining the German champion, maybe timing is not as good as Mattias Anderson just left and expectations run high?

TB: Noooooo! It’s good that Flensburg won the championship last season, it was a great achievement for the club. But I haven’t been thinking about it too much. There are many new players on the team and we have to find each other on the court – I think it will get better and better as time goes by.  We certainly have to work hard, improve and play better than we did in the Super Cup. I hope we will win the upcoming matches.

Did many of my colleagues ask you about following in the footsteps of Mattias Andersson?

TB: Some have asked, but as I said, I don’t think about the past too much. I am forward looking and as you say I’m a young goalkeeper and I hope to develop and get even better. I consider Anderson a very good goalkeeper, but I have to find my own place in this team. It’s always difficult to get into a new squad, getting to know new players and the defensive system is a little bit different compared to the one that I have been used to. But, we will be very good when we find each other and once I build some more confidence.

So, it’s all a question of time and patience?

TB: Yes, a little bit. Still, we have to play well from the start and everyone knows it’ll be difficult. We just have to focus and practice to get to the right level – I think we are on the right track.

It’s obvious who will get the most minutes in goal. Is it a disadvantage for you that you don’t know the Bundesliga yet and he (Benjamin Buric ed.) does?

TB: It’s difficult to say. I think we are going to have a good goalkeeping team and we will have to work together.  That’s how it is when you get to this level – you play together … we are both good goalkeepers and when one of us doesn’t play well, the other one has to step up and perform.  It’ll be bad if we don’t.

How is your German coming along, by the way?

TB: My German is terrible – maybe I’ve been a little bit lazy until now. I’m a slow learner, but I hope it will come to me very fast when I focus on it a little more.