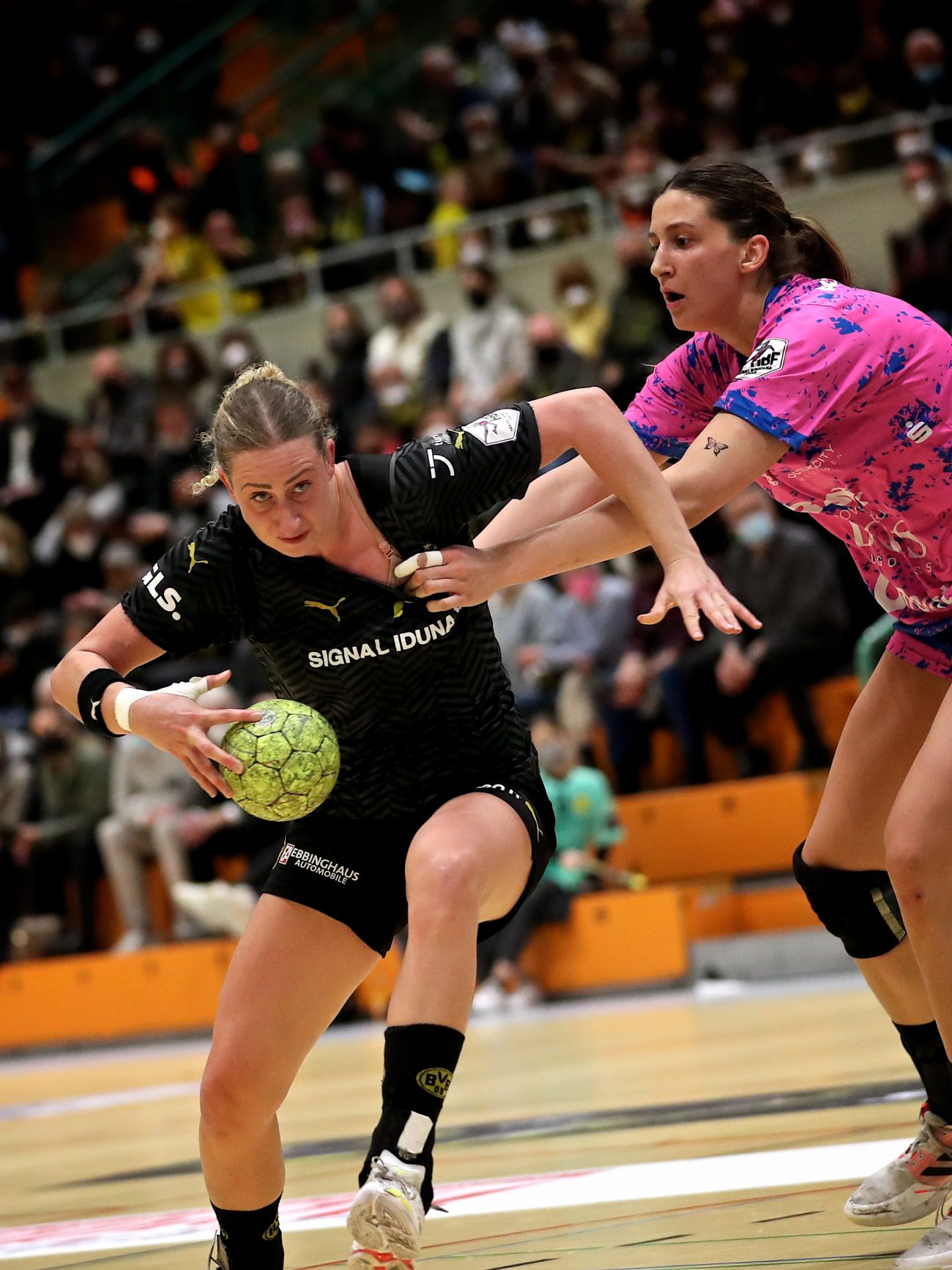 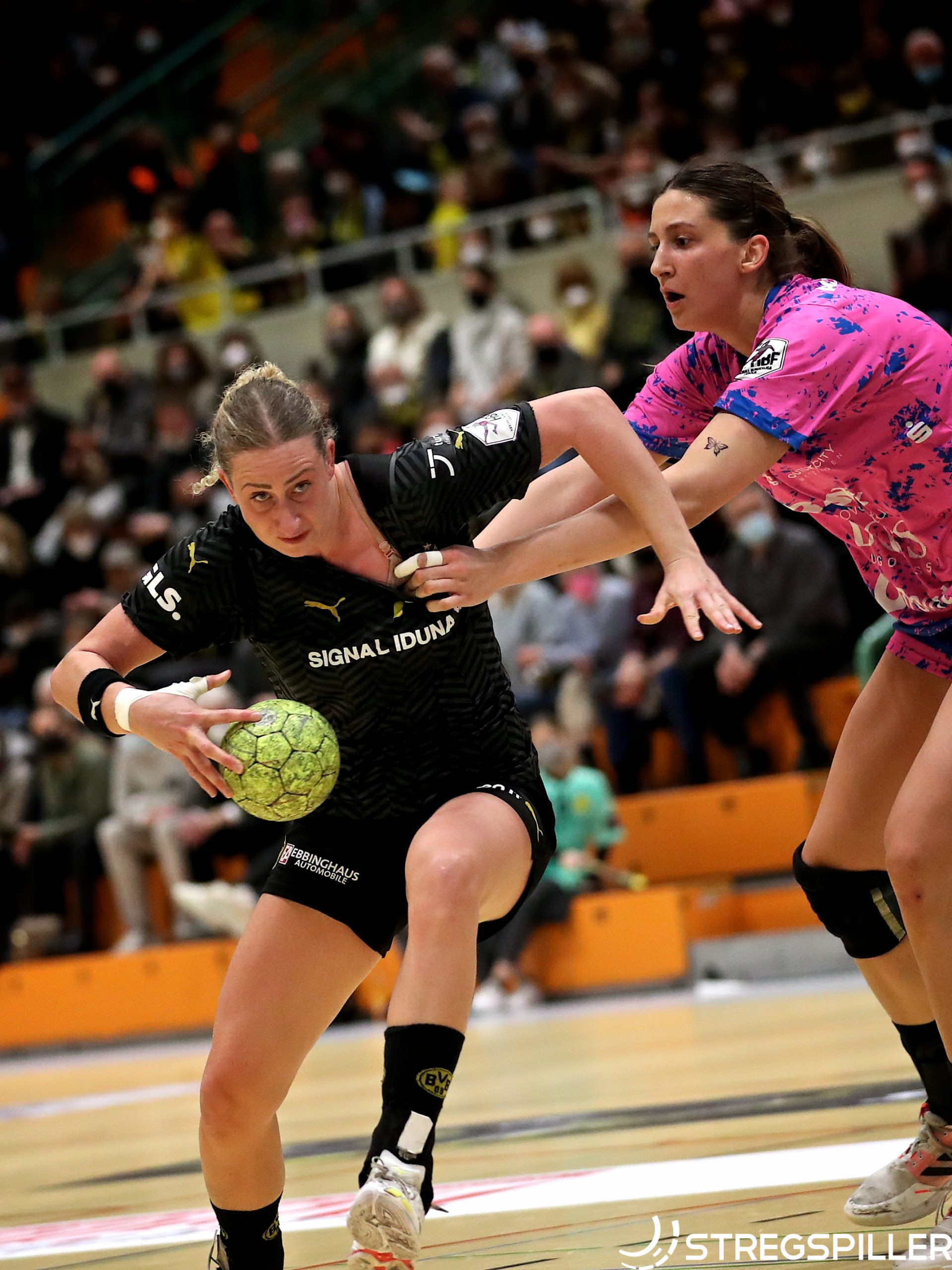 It all happened very fast.  Following a tumultuous few weeks at the beginning of the new season, Mia Zschocke (24) and BVB Dortmund agreed to settle and release her from the current contract with the reigning vice-champions of the Handball Bundesliga Frauen (HBF).  Thereafter, the German international wasted no time to find herself a new club in the north of Europe.

At the shores of Mjøsa  – Norway’s largest lake – Storhamar Handball Elite will be the new home for Zschocke, where she signed a one year agreement and reunites with former BVB teammate, Tina Abdulla.

stregspiller caught up with an upbeat sounding Mia Zschocke, who looks forward to a new chapter in her handball career.

In Norway’s REMA 1000 League, Storhamar is off to a mixed start after succeeding in Trondheim against Byasen (29:26), dropping both points at home against Molde (33:36), while settling for a tie in Larvik (29:29), a game coach Gabrielsen’s squad was leading most of the time.

In the opening round of the 2022/23 EHF Champions League season, the Norwegians got whipped in the first half against Metz (21:9) before recovering somewhat and last weekend, Storhamar recorded a historic first win in Europe’s top handball competition – 37:13 against Lokomotiva Zagreb.

After the departure of the two powerful left-backs, Bettina Riegelhuth and Jeanett Kristiansen, at the end of the 2021/22 season, Storhamar’s head coach, Kenneth Gabrielsen, was still looking to strengthen his backcourt and defense aside from having to fill the void Kristin Venn suddenly left, when the left-wing tore her meniscus in the first home game of the season.

“Mia is an experienced player on the international level, a good shooter and a very physical player – she will fit in perfectly”, Gabrielsen was quoted in the Hamar Arbeiterblad after the signing of Mia Zschocke.

“I had several offers from other clubs, but I was intrigued by the idea of playing in Norway – a country that serves as a role model in women sports, not only in handball.

“In Storhamar, I immediately felt welcome, and I truly enjoy the appreciation and warm reception by my new teammates and all the club officials.  Feeling secure and seeing eye-to-eye was very important for me, especially after the difficult time of the past few weeks.”

After six years with Bayer Leverkusen and one year in Dortmund, Storhamar will be the first club abroad for the 24-years old. Mia Zschocke is looking forward to the experience.

“I consider myself open minded and it’s cool to try something new. I can’t say too much about the strengths of the league (i.e. REMA 1000 League), yet as I just got here.

“Obviously, Vipers Kristiansand are the odds-on favorites this year as well, but hopefully we won’t be too far behind.

“Right now, I am not sure if I am permitted to play in the round-of-last-16 in the NM Cup match on Wednesday (i.e. against Oppsal ed.).  Some issues relating to my player license are still being sorted.

“But I can tell you that I am looking forward to every single minute on the court!”

Back in the EHF Champions League

To compete in the 2022/23 EHF Champions League is a bonus, but it was not the deciding factor why Mia Zschocke opted for Storhamar.  Spending time on the pitch will be more important.

“Playing Champions League again will be special, of course.  It’s the maiden season for the club and we will face several tough opponents in our group, but Storhamar is building something for the long run.

“Certainly, our upcoming match against Esbjerg will be a tough nut to crack,” concludes Mia Zschocke.