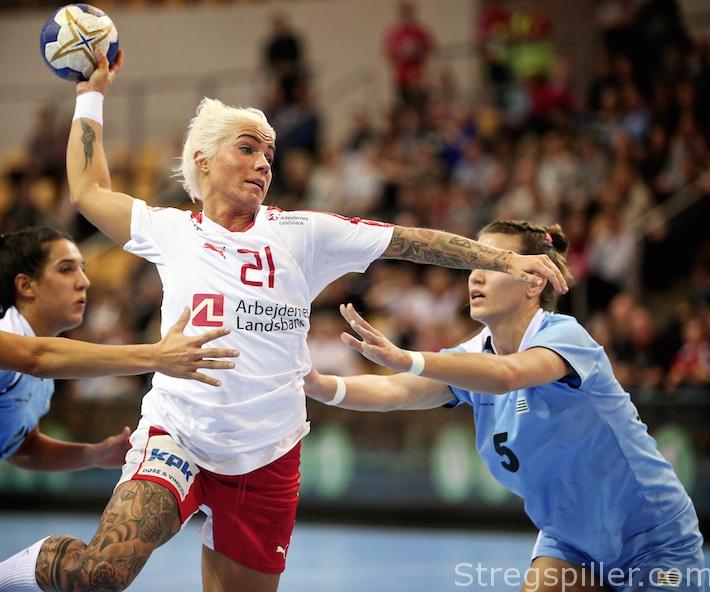 “I am okay with my role”

INTERVIEW – 11 minutes on the court was all Kristina “Mulle” Kristiansen got at the 2016 European championship.

Still, the fast and creative playmaker from Danish champion, Nykøbing Falster, is okay with it, possibly assuming the same role at the World Championship, next month in Germany.

In her club, she is a star.

Kristina Kristiansen – known as “Mulle” in Denmark and beyond – is one of the most critical players explaining Nykøbing Falster´s impressive performance in the Women´s EHF Champions League, so far.

Reaching the main round while taking along four points is more than anyone was expecting from the Danish squad before the season.

But, in the national team, the role for one of the most popular female Danish handball players is completely different.

11 minutes in the semi-final against The Netherlands, in Gothenburg, was all the time she saw on the pitch at the Women´s EURO 2016 in Sweden, last December.

It was tough for her – mentally.  Still, she is ready for another tournament given similar stipulations, when she and her teammates drive to Oldenburg for the start of their World Championship campaign, next week.

“First of all, I am happy to go to a major championship again. It’s a nice tradition in December, and I am very happy to be part of it again,” the 28-year-old center back tells stregspiller.com.

“I expect my role to be a bit the same like last year.

“When I get the chance to play, I am going to grab it, of course, but I also see myself as someone who can contribute a lot of things off court – like telling jokes, for instance and doing other stuff to keep up the spirit of the team. And that is an important role to have as well,” she finds.

“Of course, I would like to play as much as possible, and of course, I hope to get the opportunity, but I will have to see what happens as the tournament progresses.

“I am aware of my role and I am okay with it, but first and foremost, I enjoy being part of the team again,” she adds.

Champions League has given me something extra

Despite her tremendous international experience, playing Champions League has been new to Kristina Kristiansen.

She has competed in many European Cup matches and also won the Women´s Cup Winners´ Cup as well as the EHF Cup with her former club TTH Holstebro, but Champions League has been a new experience for her.

She feels the additional experience that she gained in the Champions League matches during the fall has further strengthened her physically as well as mentally, benefitting the national team as well.

“Obviously, you meet some stronger teams compared to the EHF Cup, for instance and you do not begin playing against some of the poorer teams who you are expected to beat by 20 goals or so. It is tough from the start, and that I find great. Most certainly it has given me something extra, and I also see it as an advantage that I have already played against some of the players we are meeting in Germany,” she says.

I can play against any kind of defense

In Denmark’s preliminary group in Oldenburg, opponents will be Russia, Montenegro, Brazil, Japan and Tunisia, and even though not all these teams practice the same kind of defense systems – to say the least – “Mulle” can see herself playing against any of them.

“Actually, I think they (the competitors ed.) all suit me well, and I feel I can play against any type of defense. But you only know for sure, of course, once a match begins,” she says.

“In general, I think our group looks really fine.

“Obviously, there are some teams we must defeat, and then there are some matches that will be considerably more challenging, but that’s the way it always is at a World Championship.

“Some teams play in more unorthodox ways than others, and this means that you have to be 120% focused in every match, but I am sure we will be doing just that.

“We have a strong team. We have proven it last year in Sweden – so I believe in our chances.

This will be the last World Championship with knockout matches following the group phase. Some like the present format and others hate it. Kristina Kristiansen is not exactly thrilled about it.

“Of course, you only have to be among the four best teams in your group in order to proceed, but you never know who you meet from the group you cross with. Even winning your group is no guarantee that you will not have to go home after the Round of Last 16.

“That may have its charm as well, but personally, I prefer a system including a main round, allowing you a bad day and still be in the tournament.

“However, this is not the way things are at the World Championship. We know the regiment beforehand, and we simply have to deal with it,” says “Mulle”.