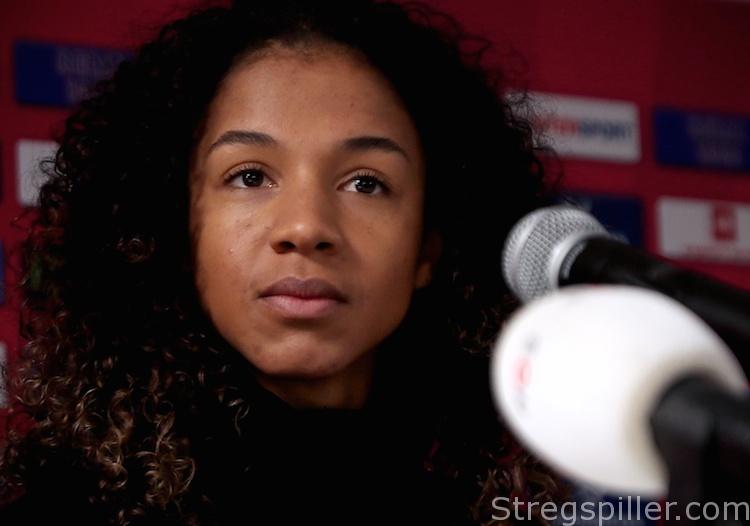 INTERVIEW – The new shooting star of the Netherlands, Delaila Amega, speaks to stregspiller.com about her first major championship, what a bronze medal would mean to her and future ambitions.

Life has been moving fast for Delaila Amega during these past two weeks.

Before this European championship, she was probably only known to some people inside Dutch handball and the German Bundesliga, where she is playing for TuS Metzingen.

Before she joined the Dutch national team for the trip to France, she had only played 11 internationals, but by now the entire world of handball knows or at least has heard of the 21-year-old playmaker.

Yet, Delaila Amega is just happy with what she has experienced in France, thus far.

“Performing at such a big event has been a whole new experience to me and I have learned a lot from everything that went on.

“It’s completely new to me to play in front of so many people and on such a high level, but new in a positive way.

“Before I came here, 6.000 was the largest crowd, I’ve ever played in front of – so this event has been really amazing.

“However, when I am on the court, I don’t look around so much and I don’t really feel that there are so many spectators around me. But, of course, it’s nice to be seen by so many people.

“All in all, I am really happy that I got the chance to be here and I think, I can also say that I am  proud of having reached the semi-final, on behalf of the entire team. We are a rather new collective of players and a young team at the same time and now we are ready to give everything to get the bronze medal. It would be an absolutely acceptable outcome for this new team,” Delaila Amega tells stregspiller.com.

Happy with every minute

She is completely aware of her role in the Dutch team, where she is not one of the regulars in coach Thomsen´s starting lineup – not yet.

“Right now, I am content with every minute I get on the pitch and with every chance I get to help the team and be part of it.

The attention she has received after several successful performances during this tournament has taken her a bit by surprise, she admits.

“I did not expect it, at all. But, I am happy that some of the matches went well for me and that Helle (Thomsen ed.) has trusted me so much.

Playing in the German league and in the EHF Cup group phase with her club Metzingen, she has felt the difference compared to a European championship.

“At the European championship you have be focused more than one hundred percent in every game.  In the Bundesliga you have to be on point as well, of course, but here, every player you meet is at such a high level that you really have to be at your best, every second of the game,” says the rising Dutch star, to whom a bronze medal at her first senior championship would simply be a dream come true.

“Yes, absolutely. That would mean so much, not only for me but the whole team.

“Every one of us really wants it to happen – walking away with bronze medal would just be awesome.”

Court time is most important

Considering her performances in France over the course of these past two weeks, it would only be natural if she had ambitions beyond Germany’s Bundesliga and the EHF Cup, but young Amega is in no hurry.

“Right now, I am satisfied with playing a lot, where I am.

“Actually, we practice on a really high level in Metzingen. Of course, I am open to everything and obviously I am excited about what the future will hold, but I am not sure if I am ready for a Champions League club, yet.

“I think, I need more training and maybe a couple of more years on my current level. Then, maybe, the time will come, when I can make the leap and join a Champions League club.

“To me, it does not really matter in which country I play. It’s more important to learn and  to play as much as possible.

“I don’t want to sit on the bench and with this in mind, I will just have to see and wait, which club will be best for me in a few years,” says Delaila Amega.