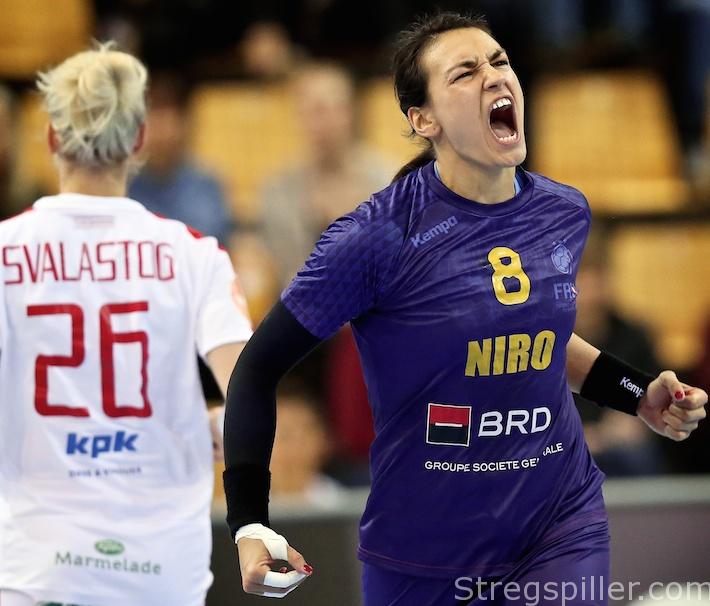 “I am running out of time”

INTERVIEW – Even though she is only 28 years old, Cristina Neagu feels it is about time, to win titles in her hometown, Bucharest, and with the Romanian national team.

In this exclusive interview with stregspiller.com, she explains why she decided to join CSM Bucuresti now, what it would mean for her leaving Buducnost with another Champions League trophy and why she feels pride when playing for her country.

It is probably no exaggeration that Cristina Neagu´s transfer from Buducnost to CSM Bucuresti is the most remarkable handball transfer so far, this year.

When the news broke that she had signed a two year contract with last season´s Champions League winners, it certainly caught the attention of the handball world.  It may well turn out to be the most successful signing of the year.

Finally, the 28-year-old hard-shooting, left-back is free of injury and in the shape of her life, according to herself. The timing of her move is also perfect, she finds.

“I am turning 29 next, and I am beginning to run out of time, if I still want to win something in my hometown.” (Cristina was born in Bucharest, ed.)

“At CSM, they told me several times during the past couple of years: ´Why don´t you come home and play here?´ but I did not feel that the time was right, until now.

“Of course, I noticed that they already won the Champions League last season, but next year, I think we will have a really strong team there – maybe the strongest in the world,” she says, referring to the fact that she is far from being CSM’s only reinforcement for the 2017/18 season.

“It would really mean a lot to me, winning something in my home town.

“Actually, I have not played for a club in Bucharest since I was a junior player.

“I have played for other clubs in Romania at senior level, but never in my home town.

“However, it is not only about winning titles.

“My family and my friends all live in Bucharest, and it will mean a lot, having them close to me, and that they can come to my games,” explains Cristina Neagu who has one big – to no surprise – wish before leaving Buducnost.

“We are only one of four”

She wants to win this year’s Champions League like she did in 2015 with the same club.

“I would very much like to succeed in the Champions League with Buducnost once more, before I leave the organization.

“It was fantastic to win the tournament with this team two years ago, and I enjoyed four great years with the club.  So, of course it will be hard to ‘say goodbye’, but it would feel right doing it with another Champions League title.

“Yet, I also think that the time to leave is right.

“Several other players will stop and Buducnost are going to build a new team with young talents who will all  play an important part in Montenegro´s preparations for the 2020 Olympics.

“I think within a few years, Buducnost will be an international top team again.  For now, winning the Champions League with them again would just be awesome.

“However, we are only one of the four teams at the FINAL4 in Budapest, next month.

“This season, we have been a bit inconsistent – we had several ups and downs, especially in the main round.

“We played two great quarter-finals against Larvik, and we can take that with us to Budapest.

“In the emi-final, we are going to meet Gyor, just like we did last year, and that will be at least as tough as it was 12 months ago, when we lost to them, finishing last, eventually.

“The same holds for a possible final against either CSM or Vardar.  All we can do, is to perform at our best and show our opponents that no one gets an easy win against Buducnost!”

When Cristina Neagu claims that she is running out of time, she may also be thinking of many and some long-lasting injuries that have been bothering her in the past.  Those days are over, for the time being, anyway.

“I feel that I am in the shape of my life, right now.

“I am not injured, and I have been able to practice regularly for many months – that is really nice.

“And I sincerely hope it will continue this way,” she says.

She will need to stay physically fit and strong for some time, as her season does not end with the 2017 FINAL4.

At the beginning of June, two decisive play-off matches for the 2017 World Championship are on the calendar for Neagu and the Romanian national team.  Austria will be their last hurdle en route to the tournament in Germany, later in December.

“International matches are and have always been something unique for me.

“It still is special to play for my country, no matter if it is a World-, or European championship or Olympic Games.

“I only regret not having won any titles with Romania yet.

“We collected medals but no titles.  I really hope to experience it (a title ed.) in my career as well.

“In this respect, I am running out of time as well, as I am not getting any younger.

“I do not know much about Austria´s current level, but I assume that we should have the considerably better team, and qualifying for the World Championship in Germany is simply a ‘Must’ for us.

“For the moment, however, it’s all about the FINAL4.

“After that, we will take a closer look at Austria,” says Cristina Neagu.