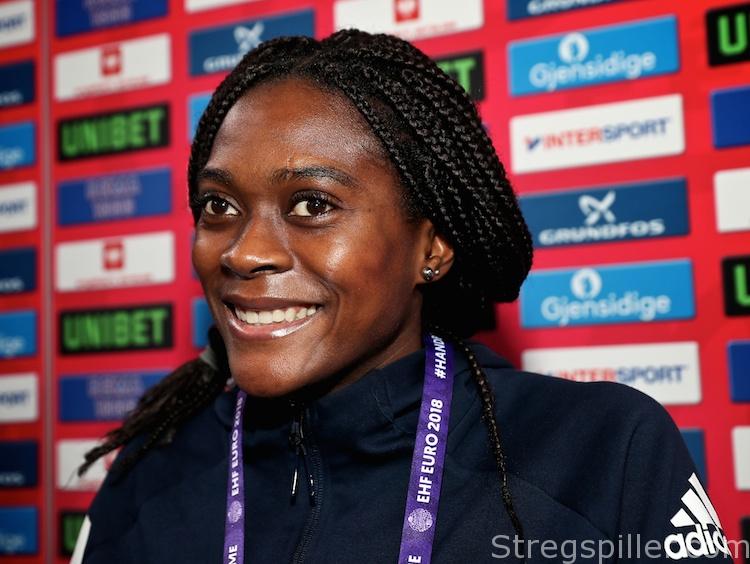 “I am so happy – I finally got the call”

INTERVIEW – Better late than never. Gnonsiane Niombla only recently arrived at the European championship, but it made her so much happier, when she finally received the call from Olivier Krumbholz – the national coach of France.

Actually, she had prepared herself to watch the European championship on TV from her home, but right before the semi-final, Gnonsiane Niombla finally got the phone call that she liked to have gotten already some weeks ago, before the start of the championship.

But, only now coach Krumbholz thought that it was time to invite the 28-year-old, versatile, backcourt player, for the rest of the competition.

“Of course, it’s a big privilege to be at this tournament, especially as I was not selected in the beginning.

“Now, that I am here, I want to make the best of every moment – I am just so happy to be here.

“I admit, I was a little bit surprised, when I finally got the call from Olivier Krumbholz, as I was not prepared to go and join the team, at all.

“Actually, I thought this championship was over for me, before it even started. But of course, I was very, very happy, when he was on the phone, and my first though was, ‘Oh my God, now I have a chance to be a part of this European championship in my own country’.

“I remember there was just chaos inside me. I immediately called my boyfriend and my mum to let them know of the good news because being able to play this tournament in France, and to share it with family and friends is such an overwhelming feeling.

“It ‘s also great to be back together with my teammates in the national team,” Gnonsiane Niombla tells stregspiller.com.

“Want to help where I can”

“I am not so sure what my role in the team is right now, but I just want to help where I can and in whatever position the coach has i mind for me – I wan to contribute as much as I can,” says Niombla who moved from former Champions League winner CSM Bucuresti to the French champion, Metz Handball, before this season.

Given the current situation, she feels that she can make good use of her enormous international experience, after all these years in the Champions League.

“I think, I will benefit a great deal from the experience I got from my many years of playing in the Champions League with Bucharest and now in Metz. These are the kind of matches we are facing, right now.

“In the Champions League, you learn how to deal with high pressure situations and the intense atmosphere that you only encounter at the highest international level. I am convinced that I can help my team with my experience.

The final against Russia, on Sunday will be the first European championship final for a women´s team in the history of the French Handball Federation, obviously it’s very special to her, as well.

“I think it is amazing that we are in a European championship final for the first time ever and it will be at home.

“Now, I think a silver medal would be – maybe not a disaster – but a very big disappointment.

“We dream of gold – we definitely dream of winning gold.

“Although, Russia has a difficult and very, very good team, we know we can do it.

“Handball is such a fast paced, up-and-down game that you cannot predict much over the course of 60 minutes, but we will certainly do whatever we can,” she promises.

France’s recent history encountering Russia are not the best as of late. At the 2016 Rio Olympics, they lost against Russia (22:19), and in the opening match at this European championship, they beat the French squad again – 26:23.

So, why should it be any different this time around?

“I will certainly not disclose our strategy here, but we know what player like Vyakhireva and Dmitrieva can do. They represent the heart of the Russian team, so we must play particularly tough against them.

“Furthermore, we must run a lot against a team such as Russia and, of course, we need all the support we can get from the crowd.

“Support, support, support – please! Just like yesterday, when we really felt this amazing wave of support coming from the tribunes.

“It’s so wonderful to see family members and friends among the spectators, knowing that they are supporting us. And, then you see all these blue, white and red colors in the arena – it was just great and with the same backing tomorrow, we can do it – I am sure,” concludes Gnonsiane Niombla.