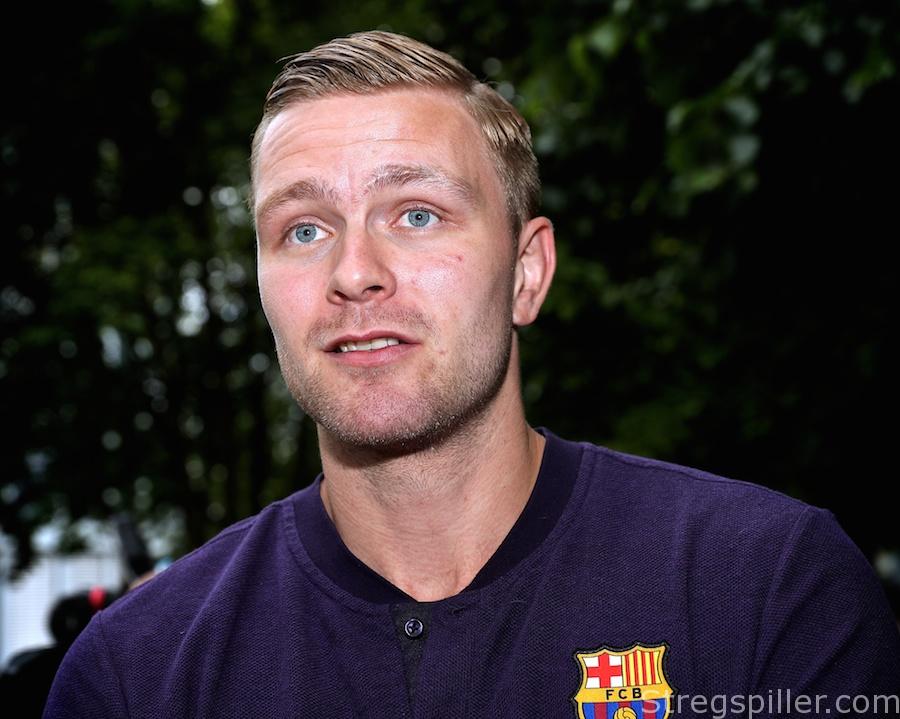 “I am still getting used to playing with Cindric”

INTERVIEW – A decent rivalry could have been on the horizon, when Luka Cindric joined Barca from Kielce before this season.

In this exclusive interview with stregspiller.com, Aron Palmarsson denies all of it, but he admits that he still needs some time to get used to playing with the Croatian star.

It was one of the biggest news of the year in the world of handball, when Luka Cindric´s transfer from Kielce to Barca was announced.

At the time many wondered how things would turn out with one world-class playmaker in the team already – Aron Palmarsson. Who of the two would see more time on the court? Would there be jealousy and rivalry between the two stars?

So far, Barca’s head coach, Xavi Pascual, has chosen a bold and unconvential solution. For long periods of time, he is playing with both of them on the pitch – Cindric in his accustomed position in the middle and Palmarsson as left back.

“I am happy as long as I am on the court, but I must admit that it has taken me some time to get used to playing left back.

“Of course, I play where the coach puts me, but I am still working on it.

“That said, Luka has turned into a tremendous reinforcement for our team. From the start he fit in very well and no one can deny what as fantastic player he is.

“The cooperation between him and me works better and better all the time, and I must admit that our offense became really strong after his arrival,” Aron Palmarsson tells stregspiller.com.

Playing in Barca also means having to live with high expectations. Qualifying for the FINAL4 of the VELUX EHF Champions League is a “Must” every year and winning the prestigious tournament is the stated goal.  It’s just what Palmarsson is looking for.

“That’s what I have been used to during my entire professional career. That’s how it was in Kiel and Veszprém and that’s the way I like it. I like to play in a big club which can compete for the Champions League title and that’s what I get in Barca.

“We do have high expectations in the team and the outside world is expecting just as much.

“Our goal is to reach the FINAL4 every year and we also aim to win the competition every year. But, as we have seen in recent times anything can happen at the FINAL4.

“We were certainly not happy finishing third last season, so we are determined to do better this time around.

“And, I do think we have a very good chance of doing just that. We have a very strong team this season and after our rather surprising defeat in Szeged, we have been consistent and played very well.

“In fact, this season, thus far, has looked a lot like last season. Back then, we started by losing in Mannheim against Rhein-Neckar Löwen, but then we won eight or nine or ten straight matches, and we have started a similar winning streak this time,” states the 29-year-old Icelandic international, who is looking forward to a couple of decisive matches before the Champions League takes a winter break.

On Saturday night, Barca will receive SG Flensburg-Handewitt before heading to Paris to face Paris Saint-Germain Handball on December 1 in the last Champions League match before Christmas.

Currently, the Spanish club shares first place in Group A together with Paris, with both teams on 14 points. Barca can secure the number one spot in the group and skip the Round of Last 16 with two wins.

Did not feel comfortable in Flensburg

“Yes, we can take an enormous step forward with two wins against Flensburg and PSG.

“In Flensburg, we won comfortably by seven goal and on a personal note, I can say that I never felt as comfortable when playing in Flensburg, as I did on that occasion.

“However, I noticed how well Flensburg did in Paris recently. There, they deserved more than a one-goal defeat, so we should be prepared for a different Flensburg team this time.

“After this game, we’ll travel to Paris for a difficult clash for first place. It goes without saying that we will do our utmost to win this match, as this will put us very close to winning the group. Although, there’ll still be some tough matches after the European championship.

“Our match in Paris looks to me like a 50-50 chance, but two more victories will make our fall season a real success.”

He is not only hungry to win the Champions League together with Barca. Aron Palmarsson is longing for another title in the competition that he won with THW Kiel in 2010 and 2012.

“As it has been eight years since I last won the Champions League, I am hungry to win it again and winning the competition with Barca would mean the world to me.

“Moreover, I would like to win the Champions League as many times as Olafur Stefansson did.

“He is a player I really look up to – he won the Champions League four times. Therefore, my goal is to also win four titles and as I will turn 30 next season, I may not have much time to get the remaining two titles,” he says with a smile.

What continues to puzzle people around the globe is how Iceland with a population of 340,000 can keep on producing top players all the time.

“I get that question often and it’s a real good question considering the size of our population.

“It has a lot to do with the culture, I think. Handball is a very big sport in Iceland

“Usually, in Iceland kids play either handball or football or even both.

“In addition, the country makes a big effort in educating coaches, so all kids benefit from this development. Moreover, it is natural for top players to take on a coaching job for a kids- or a youth team. This way the kids do not only experience competent coaching, they are often coached by their idols as well.

“There is another side effect as well. The fact that Iceland is good in educating coaches means that there are many Icelandic coaches to be found in the top teams around the world and the fact that our national team does well most of the time makes more kids want to play handball.

“Last but not least, many Icelandic players gain valuable experience by playing abroad at a young age.”

During the Champions League break Palmarsson will prepare for and play the European championship with the Icelandic national team. His team will play their preliminary matches in Malmö, where they are in the same group with the World champions from Denmark as well as Hungary and Russia.

“It’s a tricky group. Denmark are the obvious favorite and they are going to get an enormous support from thousands of fans.

“Hungary are always hard to predict, while Russia are redesigning their team and so are we.

“We have many young players in our squad. All of them are very promising and they are the result of the great work that’s being done in developing talents in Iceland.

“Therefore, I believe in a great European championship for us and in a bright future for Icelandic handball.