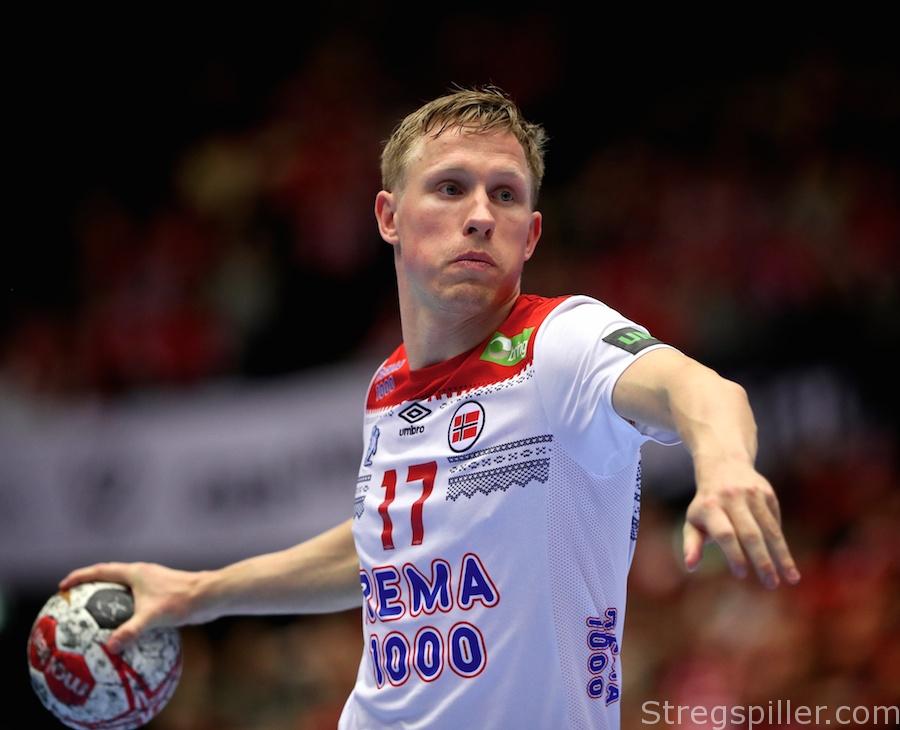 “I believe in Denmark”

INTERVIEW – Magnus Jøndal made a significant contribution in Norway’s “Must-Win” game against Sweden (30:27), at the ongoing World championship, scoring 11 goals on 12 attempts.

The 30-year-old left wing confirms to stregspiller.com that all Norway can do now, is to beat Hungary and wait for the outcome of the last match in the main round, between Denmark and Sweden.

Magnus Jøndal certainly did what he could on Monday evening, keeping Norway in the race for a semi-final appearance at the 2019 World Championship.  11 of his shots hit the target – seven goals in the first half and four after the break kept Norway ahead of their Scandinavian neighbor.

“It was a tough game, but we got off to a good start and we managed to run the way we wanted.  It was tough, but a nice match.

“I think we played a really good game. Sweden are a quality team, but we created some fine opportunities and we scored the goals we needed to win the match,” summarizes Magnus Jøndal.

Not sure what happened

Actually, Norway decided the match in the minutes before and right after break, when they outscored Sweden 8:1 within 10 minutes.  Sweden never recovered although, they reduced the deficit to two goals a couple of times in the final minutes of the game.

“I am not quite sure what happened during this period, when we built our big lead. Generally speaking, I am not good at remembering, what actually happens during  a match – I am sorry, but I really cannot explain it,” says Jøndal ,who joined Flensburg from Danish GOG before this season.

Obviously, he was content with his performance against Sweden.

“I am super satisfied. I don’t think I’ve ever scored so many times in a match for the national team, as I did in this game against Sweden – it was nice to see nearly all my shots go in,” he says.

Before the match, there was a lot of talk about Norway being disadvantaged after having only 20 hours of rest following their 32:28 win against Egypt, on  Sunday night.  However,  Norway did not look particularly tired.

“’No – actually, I felt surprisingly fresh and fit. We have a very experienced team of health professionals, who provide excellent work.  Plus, we had a good night after the match and we felt well rested and prepared.  This aside, you are always ready to play a match like the one we had  against Sweden,” says Magnus Jøndal.

He admits to becoming a bit nervous, when Sweden cut back on Norway’s seven-goal lead towards the end the game.

“Actually, we were in control – more or less –  all the time, but of course, things always happen fast in handball.  Towards the end, we did not feel completely secure, but fortunately we managed to ride the storm.

“We have so many players with “big-match” knowledge that we keep a cool head in such situations, and personally, I can already feel the additional experience I gained in Flensburg,” finds Magnus Jøndal.

The decision about which teams will book the tickets for the semi-final has been postponed until the very last match day, where Norway will meet Hungary before Denmark and Sweden square-off in yet another Scandinavian clash.

To keep their semi-final hope alive, Norway will have to defeat Hungary, and then coach Berge’s team will have to wait for the result between Denmark and Sweden, where the Danish hosts will have to get at least a draw, to assure Norway’s advancement to the final round.

“I am looking forward to Wednesday. It will be an exciting day. All we can do is beating Hungary.

“Then we’ll have to see what happens between Denmark and Sweden. We can only hope that Denmark will do their job on home ground,” says Jøndal who admits that he and his teammates will have some anxious hours ahead of themselves before knowing the ultimate result.