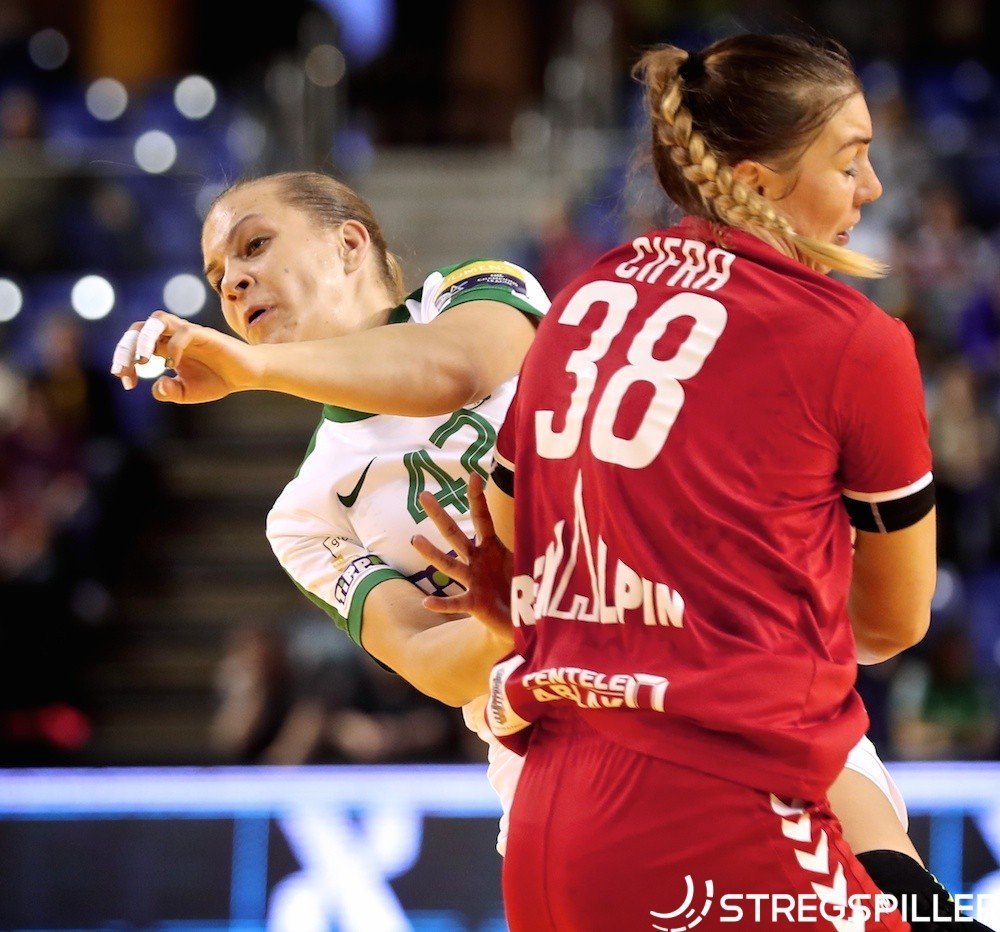 “I can assure you that we’ll never give up”

INTERVIEW – Ranking as the top scorer in the DELO EHF Women´s Champions League does not satisfy Katrin Klujber, as long as her team – FTC – is struggling as she openly admits in this exclusive interview with stregspiller.com.

She also talks about FTC´s ongoing dream of reaching the FINAL4 and the prospects of Hungary’s at the 2019 World Championship.

She has been a success from the moment she joined FTC-Rail Cargo Hungaria, better known to some as Ferencvaros.

Klujber arrived in the Hungarian capital at the tender age of 18, when she transferred from league rival Dunaújvaros in the middle of the 2018/19 season. At FTC the hard-shooting right back had an impact from the get-go.

This year, she continued where she left off at the end of last season – scoring goals – lots of them. After the first three rounds in the DELO EHF Women´s Champions League, she is the top scorer in the competition with 26 goals.

“I view it as positive feedback and that my work is paying off.

“However, for me the results are so much more important compared to how many goals I score. And therefore, I cannot be fully satisfied right now, as our achievements have not been all that good, so far.

“It would be ideal, if I could maintain my current rank as top scorer, while Fradi (FTS, ed.) win the next matches,” she tells stregspiller.com.

Her personal success at FTC has a simple explanation.

“I always try to do my best and I always work hard. In addition, I did get the opportunity to develop big time ever since I play here in Fradi.

“It’s easy to grow as a handball player in this environment. FTC is a big and ambitious club, yet our team is like one big family and our fans are just amazing.

“That’s all I need to develop as a handball player,” she says.

Klujber is absolutely correct, when stating that FTC´s results this fall have not been the ones the club is accustomed to.

In the Hungarian league, FTC have already given up two points after drawing twice and the match against their arch rival from Györ is still in front of them. Accomplishments in the Champions League don’t look much better.

FTC opened the group phase with a 31:22 defeat on the road against Vipers Kristiansand before suffering yet another remarkable defeat (34:28) at home against Metz Handball.

Finally, in the third round FTC booked their first Champions League win of the season, but even the 37:31 success at home against Podravka Vegeta did not come easy. The visitors from Croatia were leading most of the time early on and only an impressive performance in the second half led FTC to the six-goal success.

“Yes, it was a difficult game, but we knew we had to win it, in order to stay alive in the Champions League.

“I admit that you probably couldn’t see it in the first half, when we definitely did not play well.

“However, our heart and our spirit took us forward and our second half was really good. We managed to tighten our defense and as a result we were able to run the fast breaks that are so crucial to us,” sounds the analysis from Katrin Klujber.

Saturday evening, Podravka will await again, as the second half of the group matches begins after a two-week break. Before this weekend, Metz are on top of Group A (5 points), followed by Vipers (3 points), while FTC and Podravka are tied with two points each. It says everything about the importance of Saturday’s match in Croatia.

“No matter who we face from now on, it’s important. Obviously, we go for the win in each and every match that we play. That’s what we have to do from now on.

“If we can win our last three group matches, at least we’ll be sure to reach the main round,” according to Klujber.

Time and again FTC have tried to reach the Champions League FINAL4, but thus far, the dream hasn’t come true, even though the club got close a couple of times.

In the past four years, the quarter-finals meant the end for FTC’s ambitions. Instead they had to watch their eternal rival, Györ, to make the cut and even watch them win the competition in the last three years.

“Of course, I hope we will succeed this year – finally. We all do. It is our dream, but we also know that we will have to work really hard to get that far.

“This season there are some really good teams in the competition and as mentioned before our start has not been particularly good – so we have a lot to catch up to.

“However, I can assure you that we’ll never give up,” Klujber promises.

No focus on the World Cup yet

Naturally, it did not take long before Katrin Klujber caught the eye of national team coach, Kim Rasmussen, and earlier in March she made her debut for Hungary.

She is one of the young guns and Rasmussen puts a lot of faith into Klujber ahead of the World Championship, in Japan.

“Of course, I am looking forward to the experience as well.

“We have some “interesting” opponents in our group, but if we play the kind of handball we know we are capable of playing, we do not have to be afraid of any competitor.

“However, before the World Championship begins, we have some very important matches with the club.

“For now, my focus is on those games and then I’ll think more about the World Cup later on,” says Katrin Klujber.