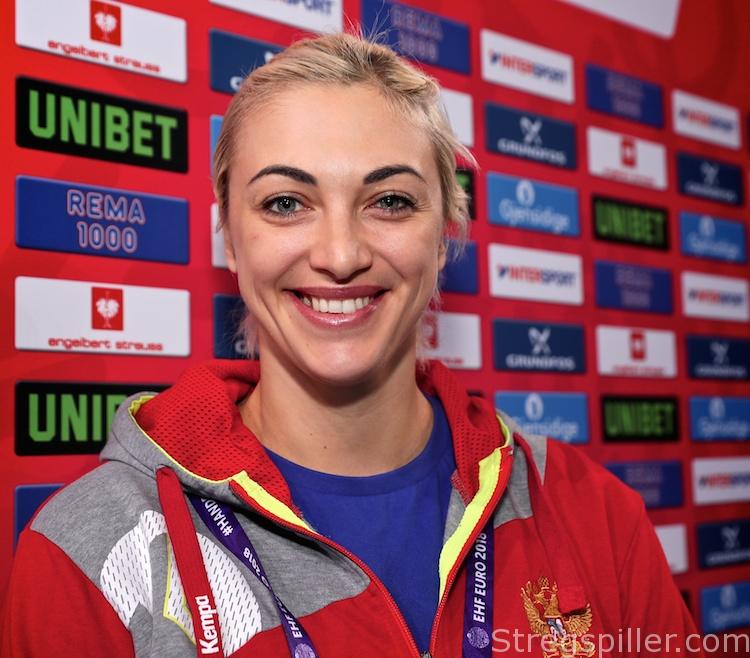 “I do not hear the crowd”

INTERVIEW – The crowd at the Accor Hotel Arena in Paris will not impress  Anna Sen.  “I never hear the crowd, I only hear myself,” she claims ahead of the EHF European championship final, against France, on Sunday

If we are to believe Anna Sen, the audience at the Accor Hotel Arena in Paris-Bercy can create all the noise they want to, it won’t affect her, as 16,000 spectators are expected for the final match between Russia and the French host, on Sunday at 17:30 hrs.

“Yesterday, someone asked me, if I was listening to the music in the arena and I said no, I don’t listen to anything except myself, Trefilov and my teammates.

“Apart from this, I hear nothing while I play,” Anna Sen tells stregspiller.com.

“Adjustments have sent us to the final”

It’s a fact that we will see a new European champion tomorrow, in the truest sense of the word.

Neither France, nor Russia could win this title before. France have not even reached a European championship final before, while Russia  been there only once, all the way back in 2006.

As one of the most experienced players in the Russian team, Anna Sen has explanation why her team has succeeded this time.

“Trefilov (the coach ed.) has made some changes to the way we play handball.  Among other things, now, we are playing faster than we used to, and these adjustments have improved our game considerably.

“Of course, I know we will have a difficult game tomorrow (Sunday, ed.) against France, but of course we want to win this competition – now, that we got so far.

“We received a lot of calls from people back home who are saying: ‘Please, win this tournament for us!’  Of course, such encouragements make us very happy and at the same time as we feel obligated to deliver a victory to all the people. We really feel that we are playing for all Russia,” says Anna Sen.

While Russia have been World champions numerous times and are the reigning Olympic champions, they haven’t succeeded in European championships.

Sen doesn’t hide that such circumstances make this final match extra special for her.

“For me, it’s very special – in fact for all of us it is.  And, what makes it even more special is the fact that we already played against France once at this tournament, never mind talking about the Olympic final, two years ago.

“I am sure that the defeat against us in the Olympic final, in particular, means that France must be keen to succeed against Russia, now.

“I am not sure what our win in the first game of the competition will mean?  I don´t know, if this victory will make us the favorite, tomorrow?  All I can say is that we will try anything we can think of, to win this final on Sunday.”

At this European championship, there has been a lot of talk about Russia´s coach, Evgenii Trefilov, and a change in his attitude. These days he appears to be much friendlier and more pleasant compared to  his previous outbursts – shouting and yelling at his players, while substituting them immediately once they’d made a mistake.

Anna Sen has noticed this change as well.

“I have been working with Trefilov for 10 years, now.  So, I know him and he knows me and it’s correct that now he helps us more from the bench than he used to – he still shouts once in a while, but sometimes that’s necessary too!

“He still is very emotional and that is the way it should be in sport – actually, that’s okay,” says Anna Sen who hasn’t thought about what will make the difference in the final match against France.

“I don’ really know what to say. Maybe our will to win in combination with our defense and our counter attacks”, sounds her analysis ahead of the last game of the tournament.