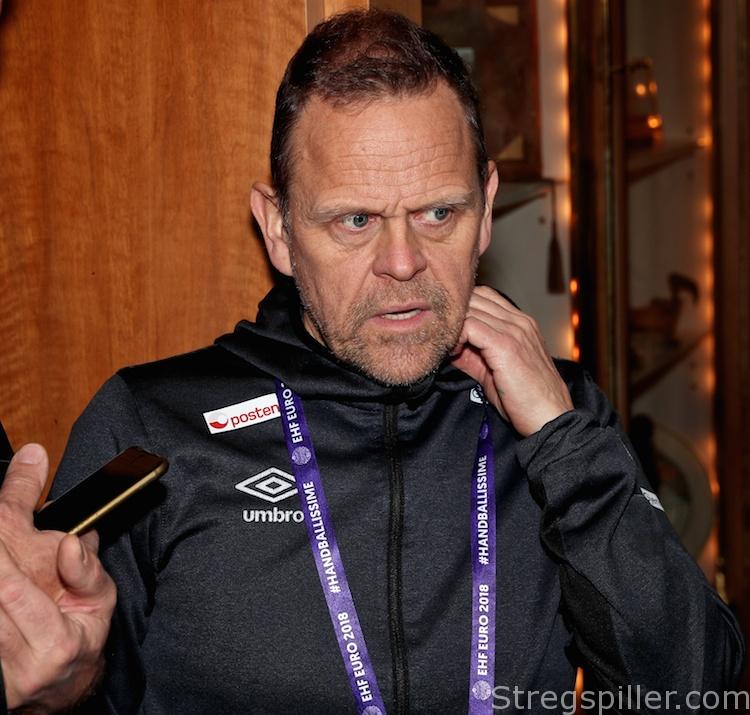 INTERVIEW – Norway´s head coach does not feel any pressure following his team’s defeat against Germany at the 2018 European championship, nor does he feel the heat of the country’s media.

He simply does not consume local media products, as he shares with stregspiller.com.

That’s the plain and simple answer from Thorir Hergeirsson, when asked if the severe criticism of Norwegian media after Norway´s surprising 33:32 loss against Germany, on Saturday afternoon affects him.

However, he openly admits that he and his players are under pressure now, and of course, he is well aware that the performance against Germany was far from sufficient, particularly on the defensive end. After all, it’s not an every day occurrence that Norway concedes 33 goals.

“I feel like someone feels after losing a match,” as he puts it the day after Norway’s loss in their opening match at EURO 2018.

“Obviously, many thoughts pass through your head in such a situation, but given the circumstances it’s all about working hard to rise again.

“Yesterday, we were far from the level we are accustomed to, especially in defense, and it’s clear that we will have to work hard and improve in this area, through video, through training and the attitude of each individual player.

“We must be more aggressive and play with more intensity, particularly in defense – we lacked ferocity and spirit and that’s what we need to concentrate on.

“We need to get better in attacking the opponents´ line players and in defense we need to stand more compact.   We also need more tackles that disrupt our opponents´ rhythm of the game and provoke them to make mistakes.

“For me these are the obvious elements that come to mind right after the match and all of it became even more apparent, after I watched a re-run of game,” he explains.

“We are expected to win every time”

Even though he may not follow Norwegian media, he is well aware of the country’s immense expectations.

“We are expected to win every time we play and when we succeed, we must win even more, but we are used to it.

“As long as we agree to play at this high level, it simply is something we have to live with,” says Hergeirsson who is not affected by an expecting public.

“I do not feel any more stressed compared to the pressure we create ourselves – the players as well as us the coaching staff.

“Norwegian handball is an ambitious sport, especially with regards to the women´s national team; we should always aim for the very top in all tournaments.

“But, those who work on the inside and with the team remain humble, and we realize that it’s not a given that Norway has a place at the top and will play for medals.

“Although, we have the potential to do so, we have to recognize that there are other good teams around – so we know that the competition is keen.

“When we lose, we have to rise, and when we win, we have to stay on the ground and keep our tongue straight.

“If we begin to follow public opinion, it’s great when we win and terrible when we lose. There’s nothing in between these reactions.  All we can do is to stick to our concepts and keep working from there,” he finds.

After the loss against Germany, a victory against the Czech Republic is an absolute must to keep the prospect of another Norwegian title intact.

However, Hergeirsson expresses tremendous respect for the Czechs who lost their opening match 31:28 against Romania.

“They have a good team. The Czechs have been able to maintain continuity as they more or less have kept the same team for some years, now. As a consequence they have been able to improve and stabilize their performances over the past few championships.

“They met a good Romanian squad – it was a tough match for them. But, they are a really good crew and we have to prepare really well.

“First and foremost, we must get Norway back to the level we know we can play at, particularly in defense.