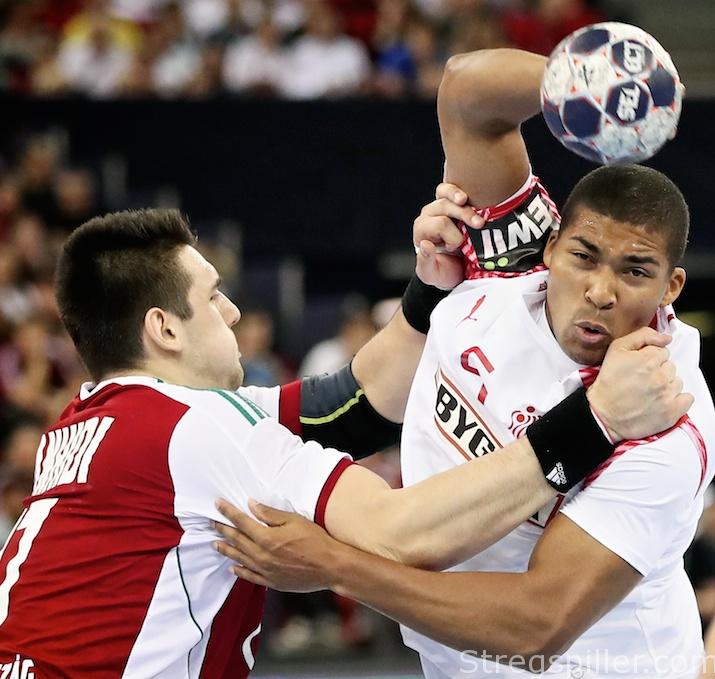 “I feel okay in my role”

INTERVIEW – Mads Mensah Larsen feels okay in his different roles – as a replacement playmaker in the Danish national team, while occupying the left back position – most of the time – at Rhein-Neckar Löwen, as he tells stregspiller.com in this exclusive interview.

Mads Mensah Larsen has no second thoughts about the part he plays in the Danish national team or at Rhein-Neckar Löwen, where he is in his fifth season.

When representing his country, he is an alternate for the playmaker position, while he gets more court time with the reigning German vice-champions, where he mainly performs as left back.  Interestingly enough, both teams employ the same coach – Nikolaj Jacobsen.

Despite being a substitute, Mensah should not have to worry about his nomination for the World Championship in Denmark and Germany, in January 2019.

“Competition is keen and for me it’s a bit difficult to foresee my exact role at the Word Championship, as everything will happen within a month or so.  If  you get a good start to the tournament, you probably have an advantage, but in general, I do not think my part has changed a great deal over the course of the past few years.

“I play in center back when in attack and then I’ll do my job in defense. There haven’t been any changes in this regard for a long time now,” says the 27-year-old.

No matter what – he knows his place in the hierarchy of the national team. As playmaker, he is behind current Flensburg star and future Veszprém player, Rasmus Lauge.

“Yes, Lauge is the obvious first choice and Morten Olsen is also there.  So, it will probably depend on the opponent and what qualities will be needed, if Morten or I complement Lauge.  At least, that’s the way I see the puzzle, right now,” says Mensah Larsen.

Different role in the club

The former AG Kobenhavn and Aalborg player is also quite content with his handball life at Rhein-Neckar Löwen, where his role is not quite the same as in the Danish national team.

“No, not at all – I often play as left back in Rhein-Neckar, apart from taking 10 or 15 minutes from Andy (Schmid ed.), whenever he needs a break or in matches that are already decided.  So, my role is definitely not the same in the club.

“First of all, I occupy the left back position more frequently in Rhein-Neckar than I do in the national team, and secondly, I am usually in the starting lineup at Rhein-Neckar – there certainly is a bit of a difference there.

Then there is the almost never ending talk about the extreme physical strain, players in the Bundesliga experience because of the many, physically demanding, games and long journeys on the road.  Mensah has felt it too.

“Of course, it’s tough. Even though we are not that far into the season yet, I can already feel the stress.

“However, that’s the way things are. It’s not something I can change, right now,” he says and refers to the fact that his team has a decent chance to take their third German championship, while still competing in the German Cup and in the VELUX EHF Champions League.

“And then, of course, it simply is a lot of fun to play handball and you want to be where titles are won. That’s still a big part of my motivation, no doubt about it,” he says.

However, there is also a chance to compete in other leagues, as more and more Bundesliga players come realize, and an increasing number of athletes have moved to less stressful environments, to prolong their careers.  It certainly applies to several of Mensah´s teammates in the Danish national team.

At the end of this season, Nikolaj Jacobsen will be stepping down as head coach of Rhein-Neckar Löwen – will Mensah be next to leave and follow some of his national teammates?

We should not expect it any time soon, though.

“No, that’s not on my mind, not at the moment, at least,” says Mads Mensah Larsen.