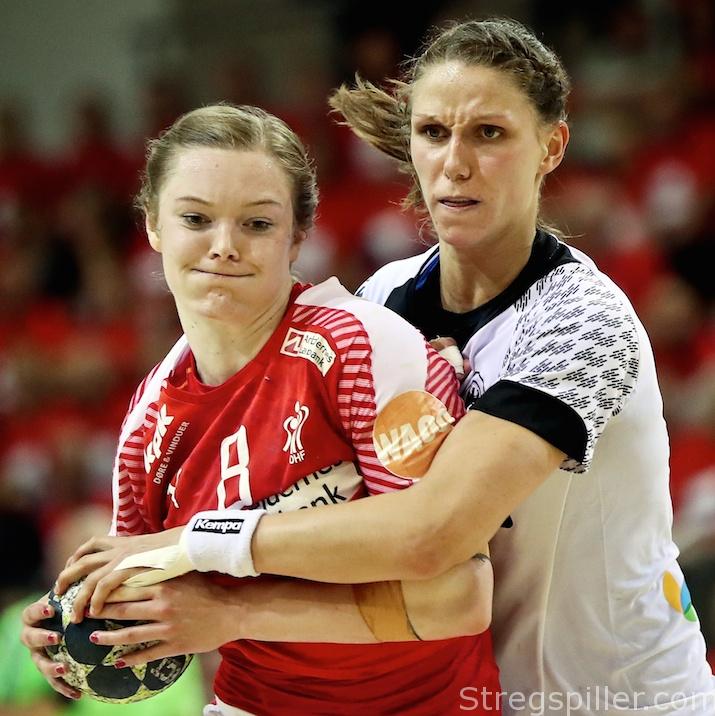 “I have nothing to lose”

INTERVIEW – There were many words of warning, when it became known that young Danish international, Anne Mette Hansen from København Håndbold, was making her move to mighty Gyor.

So far, the 22-year-old hard-shooting left back sees no reason to regret her decision to joining the ruling Champions League winners.

Back in the spring many people – some more competent than others – were ready with words of advice, as it became known that Anne Mette Hansen was heading for Gyori Audi ETO KC.

Many so-called experts found that it was too early for young Hansen to join such ambitious club, where court time might be scarce. The general feeling was that she would benefit more while developing another year or two in the Danish league.

FC Midtjylland were eager to sign the powerful left back and uncompromising defender, but in the end, Anne Mette Hansen chose Gyor, leaving København Håndbold and the Danish capital, where she grew up, behind.

“Time will show if my change came too early, as some people say, but so far I enjoy it here, and I am happy with the decision I have made.

“No matter how things turn out down here, I am sure to gain a lot of experience, something I could not get back home.

“Therefore, I cannot see how I have anything to lose by this move,” Anne Mette Hansen tells stregspiller.com.

Apart from being a pure goal-getter, she is also known as a solid and relentless defender. The latter quality causing certain trouble, when she was still playing in the Danish league. An alarmingly high number of two-minutes suspensions are supporting this observation.

Her way of defending will undoubtedly improve under the auspice of coach Ambros Martin – a true defense aficionado – and that is something the young Dane is looking forward to.

“I hope I can develop into a better handball player in all aspects of the game, so that I will also be better when playing in the national team.

“I believe that I can get some more experience on the club level, which will also come in useful when playing for the national team. And I believe I can make some situations in the game easier for myself.

“It will simply be cool to be matched against some of the best players in the world on a daily basis.

“I am not star struck – anymore”

She will certainly encounter some of the best players in the world during her daily training in Gyor.

After returning from a training camp in Lanzarote, the first official practice session in the Audi Arena was an event which drew many spectators.

Anne Mette Hansen admits that the hype around the club and being around a bunch of world stars on a daily basis has been a quite new experience to her.

“I was probably a bit star struck before coming down here, but once you have met them, they are really nice and down to earth.

“Furthermore, it is really cool to train with such good players.

“I can learn so much from them, and they really help me to become better.

“I feel that I have to give 100% in each and every training – it is a bit like practicing with a very strong national team,” finds Anne Mette Hansen.

She admits that joining Gyor has meant a big change for her, but it has been relative easy for her to adapt to her new life.

“Of course, it has been a big change.

“A lot of things have been happening during my first time here. There have been so many new impressions, and I had to get to know a lot of new people.

“So far, however, my impressions of the club and the city have been very positive.

“Time has been flying from the start, because we train a lot and there have been so many new things.

“It’s also a lot warmer here than in Denmark, something I had to get used to as well.”

To no surprise the Hungarian language is another big challenge for her.

“The language is really difficult, and so far I only know very few words.

“However, most of the communication during training is in English, and it also helps a lot that there are so many other foreigners in the team – so the move has not been a culture shock to me.

“It is easy to feel that Gyor is a “handball town”, and fans are much more enthusiastic in their support, compared to what we are used to in Denmark, and that also makes it cool to be here,” she states.

The team they all want to beat

“The level of play is also obviously higher than in København Håndbold, and there are top players all around.

“There are many new things to get used in the way this team plays, in defense and in attack.

“Everything is really top professional, and it is obvious that everyone is here to play handball,” says the 184 cm tall back court player who looks forward to another new experience in the near future.

For the first time in her career, she is going to play in the Champions League.

“That simply is a dream come true for me.

“I am so much looking forward to feeling the level and the atmosphere around these matches.

“Of course, it will be tough and difficult, as we – as defending champions – will be the team they all want to beat,” she realizes.

Many people rank CSM Bucuresti as the biggest favorite in the Champions League this season because of the many new signings, Cristina Neagu being their most competent newcomer. However, no one should write off Gyor pre-maturely, if you ask Anne Mette Hansen.

“I know that we have a good chance to defend our title.

“I also know that it is going to be hard, as there are many strong contenders.

“Many factors may play a part, and small things may decide a match or a whole season, and all we can do is being ready to defend the title, and we will be,” says Anne Mette Hansen who remains very relaxed and realistic about her role in the team.

“I am going to learn as much as I can from my new teammates and try to find my role in the system – in the attack and in defense, as it is all new to me.

“Then I am going to fight for as much court time as possible.

“Apart from that, I will give myself time to get adjusted to the team as good as possible,” she says.