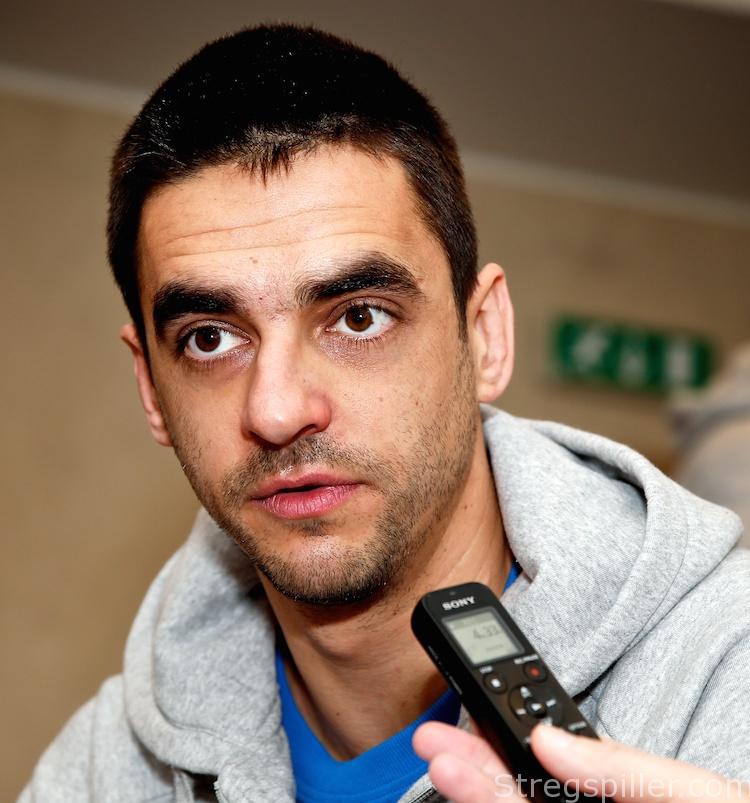 “I have to be faster and more dangerous”

INTERVIEW – Zarko Sesum realizes that he and several of the other experienced players of Team Serbia will have to step up big, to beat Iceland with four goals in their remaining group match and proceed to the main round at the 2018 European championship.

In this interview with stregspiller.com, he reflects on his team´s performances thus far and their chances to advance further.

As one of the most experienced players on the Serbian national team, Zarko Sesum is part of the squad’s bedrock.

The 31-year-old left back, who currently plays for Frisch Auf Göppingen is well aware of his role and the fact that he has not lived up to expectations at the European championship, just as the rest of the team.

Serbia’s first two matches in Group A have all ended in clear losses – 32:22 against the Croatian host and and 30:25 against Sweden.

It all means that Serbia will have to defeat Iceland by at least four goals in their last match, in Split, on Tuesday evening if they want to proceed to the main round.

“In the first match, we were in the game for the first 20 or 25 minutes, but we lost touch and were punished immediately with some quick goals.  At half time we were already down by five goals.

“In the second half, we did not manage to catch up, and Croatia’s experienced team did the rest.

“They are a favorite for taking the gold medal, so maybe we could not expect much against them after all.

“Yesterday, we lost again, but we played much better, I think.  But in my opinion, what decided the game was us missing too many scoring opportunities, several of them from six meters.

“Many of the saves by Mikael Appelgren provided them with fast breaks and easy goals.

“I must improve too”

Zarko Sesum admits that he is one of the players in the Serbian team who has to improve his performance in particular for having a chance to stay in the tournament beyond Tuesday.

“I cannot be satisfied with my own performances, so far.

“I have spent a lot of time on the pitch in our first two matches, and it is obvious that I can do much, much better.

“First of all, I must be faster and more dangerous and I must go for goal more frequently.

“All too often, we have been static in offense and this includes me as well.

“Our attack has been suffering from a lack of flow, and this has probably been our biggest problem.”

On Tuesday evening an early exit from the 2018 European championship looms – Sesum is well aware of the situation.

“Of course, it will be tough – it is a decisive match for both teams with regards to the next phase in the tournament.

“Winning by four goals will be really difficult, no doubt.  At the moment, our goal difference is minus 14, and mentally it is very hard to handle.

“Iceland is a very good team, they are executing a real good system, including an aggressive defense and they are eager to run. Still, we are here to fight until the end!”

“We still believe in our chance”

“We still believe in our chance.  We are well aware what we have done so far; we know why we lost and what we have to do to improve.

“Of course, our spirit cannot be one hundred per cent positive after two defeats, but we still believe in ourselves and in our opportunity. That’s why we are here!”

Playing in the strongest league in the world – the German Bundesliga – since 2010 , first with Rhein-Neckar Löwen and now Göppingen, Zarko Sesum is one of those players who should step up and lift the team.

“We have some experienced players who play in the Bundesliga and who have participated in many international matches.  We will have to take some more responsibility and try to bring this game home.”

In Iceland´s first two matches, they got tired as the second half progressed.  A fact, Sesum noticed as well and he hopes, that his team can benefit.

“Iceland play that kind of handball, where they go full steam from the start and they get a bit tired towards the end.  But we still have to remember that they defeated Sweden, and what they achieved in the first half in this game was really unexpected.  Despite some physical problems towards the end, they did win after all.

“If we can keep the game open until the middle of the second half, we can wear them down and win by these crucial four goals,” concludes Zarko Sesum.