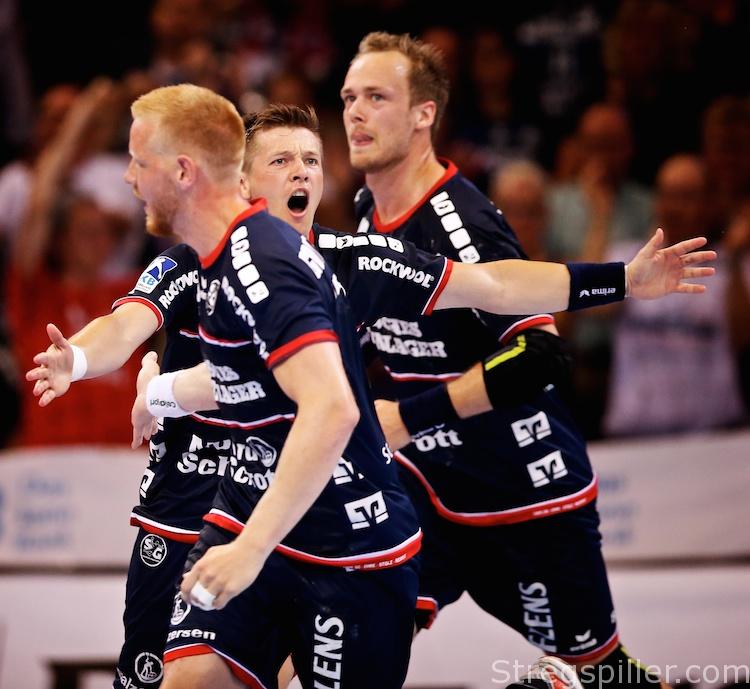 “I haven´t realized it yet”

In this exclusive interview with stregspiller.com, he recalls the memorable days of last season, when Flensburg took advantage of Rhein-Neckar Löwen’s poor finish.

He also looks ahead and appreciates the challenges of a defending champion with a different squad and a team that will be one of only two, representing German colors in the 2018/19 Champions League.

“I haven´t realized it yet.

This is the immediate reaction of Lasse Svan when confronted with the fact that he and his teammates won the 2017/18 German championship only for a second time in the club’s history after 2004, benefitting from a losing streak of former champion, Rhein-Neckar Löwen, on the home stretch.

“One reason is that I didn’t have any time to reflect about what actually happened in those last days of the season.

“Already the day after we won the championship, I and several of my teammates joined the Danish national team, first for a match against Switzerland and then heading to Guadeloupe together with the French squad for 10-12 days.  So, those last days of the Bundesliga season still appear in a somewhat surreal light.

“Now, I am going away on summer holiday and during this time I expect to reflect a bit more and perhaps realize that it (winning the German championship ed.) actually happened.

“This may sound strange as I start my summer vacation, but I am already looking forward to seeing my teammates again – those of them who will still be there – and talk this through, as I feel a need for it”, the 34-year-old Danish right wing tells stregspiller.com.

Flensburg´s performance in their last match at home against Frisch Auf Göppingen – the team from the north of Germany needed a victory assuming, Rhein-Neckar Löwen would succeed in their last match against Leipzig – certainly was impacted by nervousness but they managed to pull out a narrow 22:21 win in the end.

“We were nervous throughout the last 10 days of the season – in fact from the time when Löwen lost at home against Melsungen.

“When we took over first place and had the outcome in our own hands, the “rubber arm” was there.

“During the hours we were awake, we hardly thought of anything else. We really felt the pressure and it was reflected in our game, but fortunately, a one-goal win in the last match was enough.”

Did Svan and the other Danes in Flensburg have a few compassionate thoughts for their fellow Danes at Rhein-Neckar Löwen, like head coach and Danish national coach, Nikolaj Jacobsen and Danish international Mads Mensah, or is professional handball free of any kind of sentiments?

“Of course, we felt some compassion for them, not the least as we were in the same situation last year, when we were leading the league more or less throughout the season, but then we lost the championship at home against Rhein-Neckar Löwen. So, we probably know better than most people how they must have felt.

“Of course, we were sympathetic but the feeling mixed with enormous happiness that we finally succeeded,” he explains.

In the upcoming season, Svan and his Flensburg teammates will be facing the challenge of defending the German championship. At the same time, they will be one of only two teams representing German colors in the 2018/19 Champions League.

A daunting challenge for a team that’s dealing with considerable turnover and on paper Flensburg does not look as strong or deep as the one that just won the national championship.

“As you say, it will be a challenge.

“A number of new players will be joining us and we’ll see a complete change in the goalkeeper position. It will be interesting to see how soon we’ll find a rhythm and how quick the new players will integrate in our way of playing.

“Some really great players are joining us and if we can repeat our success from last season, I’d say that this would be extremely impressive.”

No plans of moving to a “softer” league

Considering the fact that he has reached the age of 34, it might be logical for Lasse Svan to look for a league, where physical demands are somewhat less compared to Germany’s Bundesliga. Some of his Danish colleagues already took this step.

For instance, line player René Toft Hansen left THW Kiel for Veszprém, and after this season, another Danish international, Rasmus Lauge, will say ‘good-bye’ in Flensburg and join Hungary’s handball powerhouse. The Hungarian league is certainly not as competitive as the Bundesliga but Svan has no plans of following in the footsteps of his countrymen.

“I benefit from being a wing player and avoid many physical confrontations, compared to those who occupy other positions.

“Furthermore, I am not that much troubled by all the hours in the bus while traveling to road matches, as some others are. At least, it does not bother me, yet.

“I am still very much motivated and look for more success with Flensburg in the Bundesliga and in the Champions League.

“Fortunately, we have enjoyed a lot of it lately and I hope we can continue, even though we are undergoing a bit of a generational change in the upcoming season.

“However, I do realize that in the Bundesliga the physical stress is much higher for backcourt players as well as line players. You don’t see such strain in many other leagues, maybe with the exception of the French league, which is getting more and more competitive.

“I am in no doubt that the top clubs outside Germany and perhaps France have great working conditions at the moment.

“They seem to have the money and apart from it, they have what you correctly call “soft leagues”. All in all, it makes these clubs attractive to players who would like to extend their handball careers for a few extra years.”

The ever-increasing physical demands on top players have led to some of them quitting their respective national teams already, while others openly admit considering this option.

Feeling as fresh as ever, Svan does not even entertain the idea of saying ‘good-bye’ to the Danish national team.

“I definitely have no plans of quitting the national team.

“I enjoy playing for Denmark – every international match I play is an honor, and as long as Nikolaj finds that I bring quality to the team, I will stay.

It’s almost a given that Nikolaj Jacobsen will come to the same conclusion that Lasse Svan has what it takes to make the national team for some time to come.

Svan will be needed next January, when Denmark will be co-hosting the World Championship together with Germany.

The recent triumph with Flensburg as well as the 2019 World Championship on home ground gives Lasse Svan even more reasons to look ahead.

He could hardly hide his smile after the recent draw of the final round in Copenhagen. Facing Norway, Austria, Tunisia, Chile and Saudi Arabia in their preliminary group, in Herning and the prospect of a relatively easy main round group, Svan and his teammates can look forward to a promising handball fest at home.

“It looks really good, considering our group as well as at the teams that we are going to cross in the main round. This draw gives us every opportunity to reach the semi-final, and once there we will have to be prepared for a couple of very good teams from the other bracket.”

He is well aware that reaching the semi-final is the very least that will be demanded from an expecting Danish handball nation. But Svan is confident that he and his teammates will come through and deliver the goods.

“I think we are ready. We reached the semi-final at the most recent European championship, although in limping fashion. If we can improve our game compared to the tournament in Croatia, in 2018, I am sure we will reach the semi-final again, in Denmark.”

“If we get the same kind of support from the crowd at Jyske Bank Boxen, in Herning, as we did during the European championship in 2014, it can take us far,” Lass Svan believes.