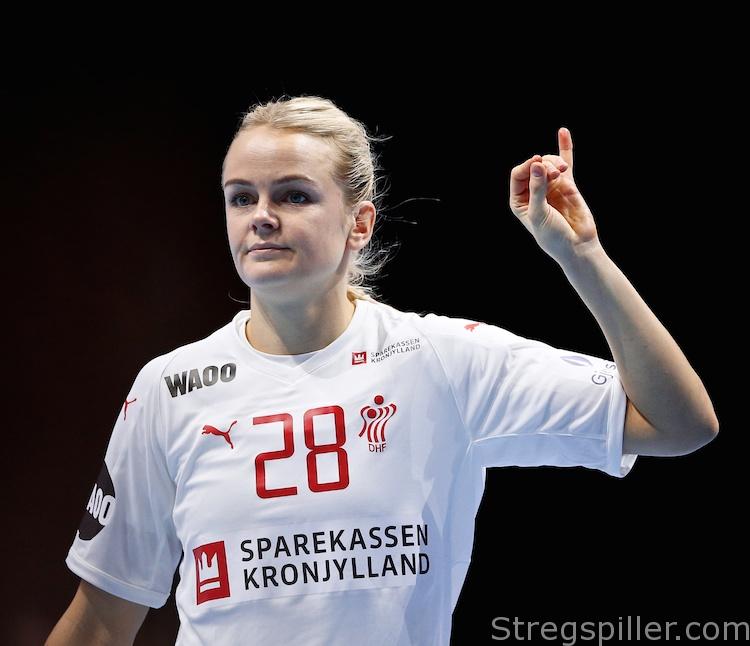 For quite a few of the pundits, the move came unexpected, when Stine Jørgensen announced to continue her career with SG BBM Bietigheim.

The 29-year-old team leader had no shortage of contract proposals once it became known that staying in Odense, beyond the current season, was no option anymore.  But, unlike the men´s HBL, the women´s topflight in Germany is not rated among the strongest leagues in the world.  Stine Jørgensen sees it differently.

“I immediately saw a number of attractive perspectives in Bietigheim’s offer.

“After several talks with club officials, I found their philosophy and ambitions appealing.

“I felt that if I am going abroad, the time is now.  And, Bietigheim appears to be the right choice for me.

“They have the aspiration to win the German championship, as they did several times before, and they also want to take the next step in the Champions League and go further, compared to what they have achieved in the past.

“I’ve spoken with their future coach, Markus Gaugisch – his ideas and plans with the team intrigued me as well.  So, all in all I wasn’t in doubt for long,” explains Stine Jørgensen.

“The HBF (Handball Bundesliga Frauen ed.) is interesting from a different perspective as well, as the championship is decided at the end of the regular season.  The league does not follow a play-off schedule as we have it in Denmark.

“I wouldn’t say that I am tired of the Danish scheme, including quarter-finals, semi-finals and finals, on top of the the regular season.  I am just curious to try something different, a format where every match counts even more.

“Maybe it’s right that the German league is not as strong as the Danish league, but to me the HBF seems to be getting stronger and more competitive over the course of the past few years, as more foreign players have joined German clubs,” says the versatile back-court player.

Does a somewhat less challenging Bundesliga translate into a reduced level of physical strain, when compared to the Danish league?

“I have not given it that much thought, but now that you mention it, it’s an interesting perspective.

“If I can prolong my career this way and have more energy for the national team, it would be an added benefit,” she admits.

Stine Jørgensen will meet at least two fellow Danes in Bietigheim.  Trine Østergaard, her current teammate in Odense as well as Fie Woller, who has been playing in the club for the past five years.

“Of course, it played a role in my decision that Trine will join them and that Fie is already there.

“I know Trine very well and with Fie I used to play in FC Midtjylland.   Obviously, I am looking forward to play handball with them once again.

“And, it looks like I’ll be playing in a stronger Bietigheim team, compared to what we have seen before.

“Management was not able to give me any guarantees of how strong the team will be, but considering the players they already signed, it looks good.  Although, some key players will leave the club after this season,” she says.

No doubt – Bietigheim did reinforce the squad.  Norwegian goalkeeper, Emily Stang Sando, will be joining from Buducnost and German international, Xenia Smits, will boost the back-court line after leaving Metz HB.

“My ambitions on the court aside, I am also looking forward to get to know a different mentality and another culture,” says Stine Jørgensen before the first foreign adventure in her career.

Jørgensen’s three years stay in Odense did not yield expected results, at least not yet.

After signing several Danish and foreign stars, Odense had the clear objective to win the Danish championship and get as far in the DELO EHF Champions League as possible.

The club did reach the quarter-final of the DELO EHF Champions League in the 2018/19 season, but there hasn’t been much else to talk about.  In January, the sub-par performance cost the job of head coach, Jan Pytlick. The former coach of the Danish national handball team was replaced by his assistant, former Danish international, Karen Brødsgaard.  A new head coach has not yet been appointed.

“Of course, it has been somewhat frustrating that we have not been able to win the medals we’ve hoped for.

“We did win medals, but none of them gold.  So, it has been frustrating.

“Yet, we still have the chance to end this season with a title or two and I hope to finish my time in Odense in style,” says Stine Jørgensen.