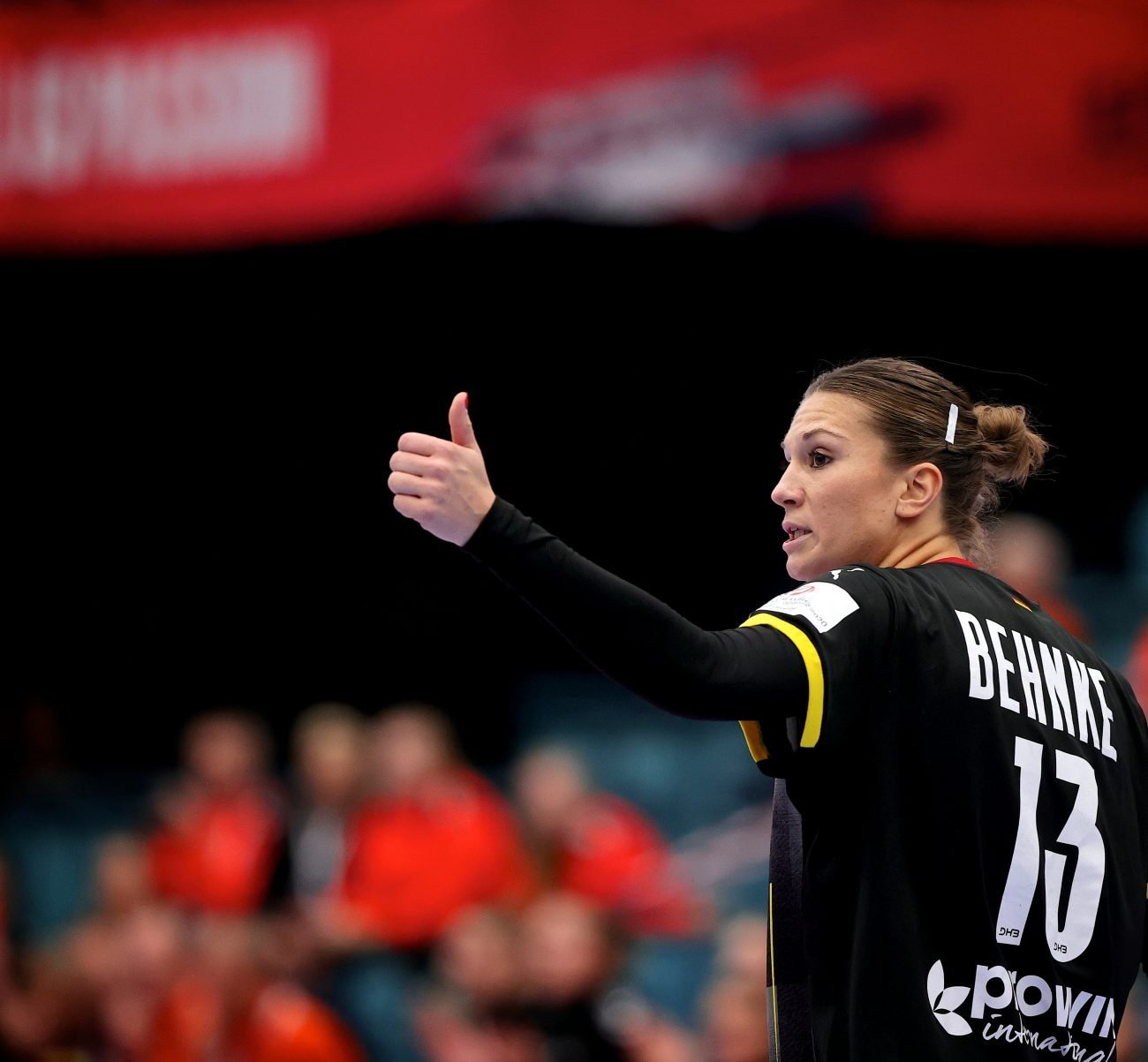 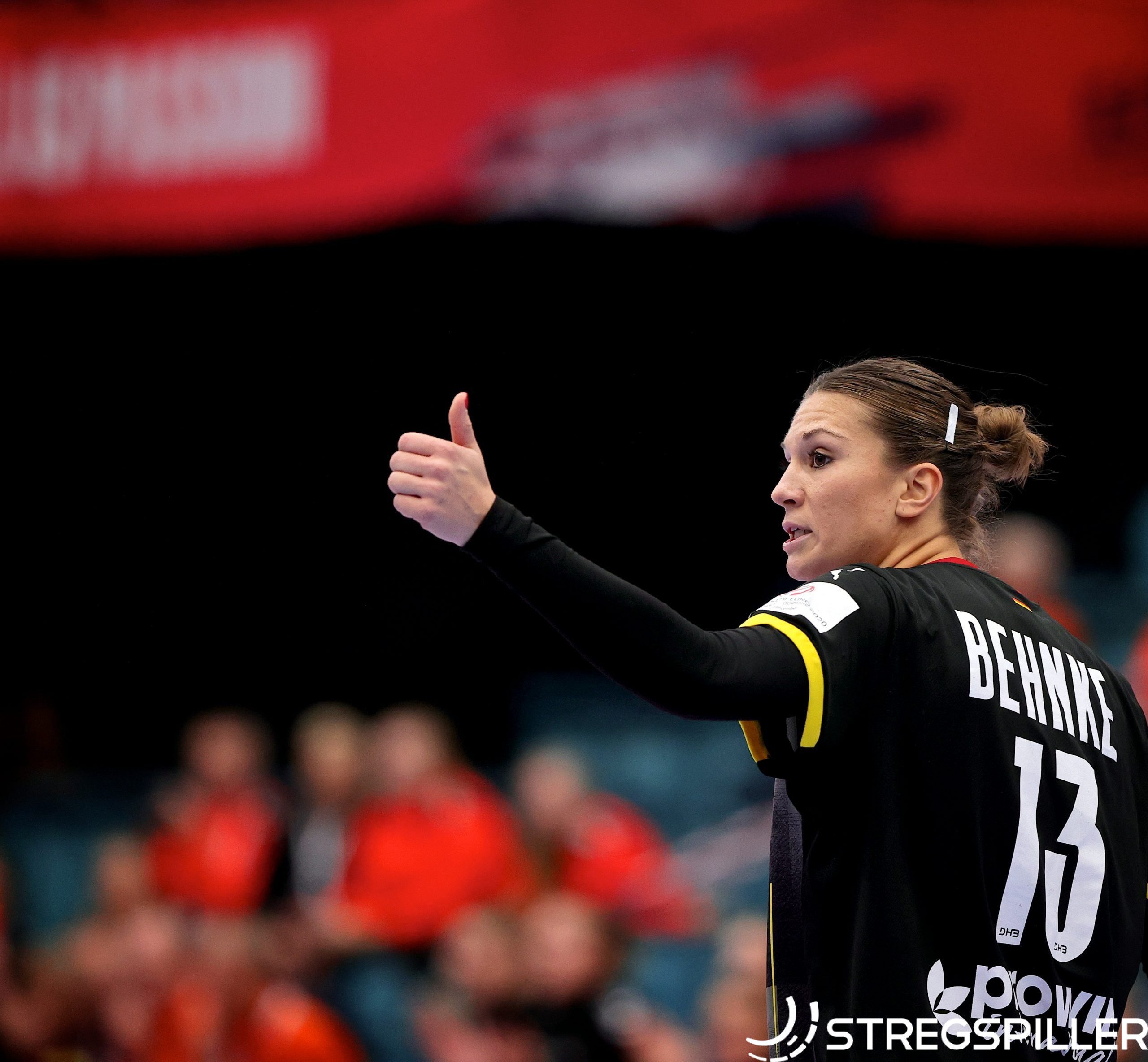 “I just can’t identify with it, right now”

Indispensable – it was the first word that came to mind while reading Julia Behnke’s announcement to retire from the women’s national handball team of Germany, with immediate effect, last week.

Together with team captain, Kim Naidzinavicius, the 27-years old line player called it quits – for now.

A bit more color was provided via social media, where Julia explained her decision, citing a “missing timetable to evolve as a team on the highest level” and unresolved “differences in recent years”.

The verdict came after analysis of another disappointing result of Team Germany at EURO 2020, this past December, where the team of head coach Henk Groener finished 7th.

Julia Behnke will leave a void as she is one of a select group of line players / central defenders, who represent international top class and who perform equally well on both ends of the court. Players like Kari Brattset Dale and Marit Malm-Frafjord (Norway), Beatrice Edwige (France), Danick Snelder (Netherlands), Kathrine Heindahl (Denmark), Linn Blohm (Sweden) or Dragana Cvijic (Serbia) – the list is short.

The importance of a line player or lack thereof, who operates at the highest level on either side of the pitch could be witnessed watching Behnke’s colleagues on the men’s side at the recent World Cup.

In Egypt, Germany tried to compete without being able to rely on the exceptional skills of Patrick Wiencek and Hendrik Pekeler in central defense – the two line players had temporarily opted out because of concerns relating to the ongoing Corona pandemic. As a consequence – not the only one – the team finished in 12th place, the worst performance of a German squad at a handball World Cup, ever! The two line players and central defenders from THW Kiel were dearly missed.

The example may be indicative of how difficult it will be to replace a player with Behnke’s qualities.

stregspiller.com spoke with her about her early retirement from the national team, the move from Rostov-Don to FTC Railcargo in the summer of 2020, competing in the Champions League in the midst of the pandemic, empty arenas and the prospects of reaching the DELO EHF FINAL4, in May, of this year.

As most other teams, Germany struggled in their preparations for the year-ending handball highlight. In fact, it was close to a miracle that Denmark pulled-off the event the way it did after co-host Norway dropped out late.

In the months before EURO 2020, most players were forced to stop playing handball in March and April because of a spreading Corona virus and national team collections in the fall were incomplete at best, leading to a messy start of the championship.

“It was a very special situation not only for us. All nations were impacted one way or another. Almost every player and every team was at a different level – many arrived straight out of quarantine and several key players were missing.

“All in all it felt somewhat chaotic, but as I said every team was affected in some fashion. The quality of handball at EURO 2020 did not reach the level of prior years, generally speaking.

“Yet, Norway and France did perform at a higher intensity compared to the other teams.”

In the weeks following EURO 2020, Julia Behnke reached the conclusion to take a break from the national team, while keeping the door open for a comeback. But, for now she has made up her mind.

“Yes – in my social media post I chose the term ‘timetable’ deliberately as it includes two important elements – ‘time’ and a ‘plan’ – and right now I don’t recognize either one in order to develop as a team on the highest level.

‘The ‘differences’ I mentioned, I don’t want to address publicly – it’s an internal matter. I am aware that people will draw their own conclusions, but let me emphasize it’s nothing personal between Henk (Henk Groener – head coach of team Germany ed.) and me. It’s all part of the current strategy and philosophy – the whole package if you will – I just can’t identify with it, right now.

From Rostov to Budapest

After only one year with the Russian champion, Rostov-Don, Julia Behnke decided to open a new chapter in Budapest, at FTC Railcargo, where she would reunite with her – now former – national teammates Emily Boelk and Alicia Stolle. Despite arriving in the Hungarian capital in the midst of the Corona pandemic, Behnke is full of praise and genuine excitement.

“I’ve only positive things to say. The club received me very well – it’s a fantastic feeling and I am very pleased with the squad. I am looking forward to each and every practice session and I think you can see that as a team we are on the right track, when you compare our performances at the beginning of the season and where we are now.

“We have an exceptional team spirit and I am just eager to get on the pitch and compete. It’s a really good feeling.

“The first few games of the season were so much more enjoyable because fans were still allowed in the arena and it’s a pity that it’s not possible anymore because of Corona.

“Hungarian fans are very emotional and enthusiastic and ‘Fradi’ have some of the very best. For visiting teams it must be intimidating to play in such a tense atmosphere. It’s sad that we can’t experience it right now.

“Still, we get plenty of support from the outside and via social media and I do hope that we may see a change as we get closer to spring. “

At this moment in time, competing in front of an audience remains wishful thinking as Julia Behnke is quick to confirm.

“In Hungary, we currently observe a curfew between 20:00 hours and 5 o’clock in the morning and in many parts of the city, it’s mandatory to wear a mask. Indoor dinning is not possible, yet shopping malls are open.”

Although, vaccinations are under way in Hungary, it’s difficult to see how the DELO EHF FINAL4, scheduled in May 2021 will be staged in front of handball fans. Given the current state of the pandemic, Julia Behnke concurs, but offers a glimmer of hope.

“As of today it appears unlikely that spectators will be able to attend the event, but the city of Budapest as well as the whole country will try everything to bring down the infection rates and make the impossible possible for such a big event.”

Empty arenas and a surprise team

One of the many changes in the fight against the Corona pandemic are handball games “Made-for-TV”, staged in empty arenas. Has Julia Behnke adjusted to this new reality, yet?

“Yes! It’s sad but I have to admit it’s something you get used to. On the other hand it was a very pleasant feeling when we played in Rostov in a noisy arena once again, where 70% of the seats were occupied.

“The anxiety before the match was different and for a moment it felt like being back to normal – the kind of feeling we knew from before (the pandemic ed.).”

While the 2020/21 DELO EHF Champions League season is ongoing has any team surprised her on the upside.

“When looking at both groups, most of the squads have shown similar performances and are very close to each other. Of course, the impact of Corona was felt as well, as we experienced weeks when no international matches were scheduled because several teams were infected.

But, hats off to the organizing countries, clubs and federation. Even scheduled games could not be taken for granted until they were played. I am very grateful for everything the organizers have accomplished thus far.”

Champions League – the road ahead

FTC’s road to the DELO EHF FINAL4 will include two intense encounters between ZRK Buducnost, the Champions League winners of 2012 and 2015, and if successful, a quarterfinal against the serial winner, Gyoer AUDI ETO, as the most likely opponent.

“True – a Hungarian derby in the quarterfinal of the Champions League would be a delight for every handball fan, but before we get there, we’ll face two very difficult games against Buducnost in the Round of Last-16.

“When looking back at our accomplishments in the ongoing Champions League season, I think we can be satisfied.

“Yes – we did show a subpar performance in the match at home against Bietigheim – a result we cannot be pleased with. Still, as a team we always responded strongly and in our most recent games a clear upward trend is recognizable, I think.

“Considering how hard Corona has hit our club, we are playing handball at a high level once again. As of today, there are only five individuals, including players and staff members, who were not infected with the Corona virus.

“In particular, last year in September / October we were severely impacted by the virus, when a whole wave of infections occurred. Since then we only experienced a case here and there.”

Despite the ongoing interruptions caused by the pandemic, Julia Behnke refuses to characterize the suspension of games to become some sort of a routine.

“I wouldn’t call it a process that we’ve grown accustomed to. Everyone affected handles it in a professional manner. We get tested regularly and when someone does get infected, all players and staff will be informed immediately, no matter what time of the day. From this moment on, we remain in isolation until a negative Covid test lifts the quarantine.

“That’s the current situation and we have to accept it as it is. At this point, I am just grateful that we can play handball and that the season won’t be cut short.”

Next FTC and Julia Behnke will clash with ZRK Buducnost in the first knock-out round of the 2020/21 DELO EHF Champions League. How do the two teams compare?

“Based on the performance in our most recent games, I think we found our rhythm and I am convinced that we can maintain our flow in the upcoming Round of Last-16.

“In the past few weeks, we caught a wave and our recent success can be felt within the team. Everything feels right and there is a certain looseness in the best sense.

“Now it’s do-or-die and we have to demonstrate where we really stand, especially mentally. We know we have to win, but I am optimistic and we certainly don’t have to hide.

“Buducnost have struggled as well during the group phase of the Champions League and several injuries explain much of it. But, I do hope that we can continue where we left off and I expect us to reach the quarterfinal.”

After leaving TuS Metzingen in the summer of 2019, how does Julia Behnke rate her own development since then?

“Over the past three years, I’d say that I am playing at a stable level. Here in Budapest, I play a different more dominant part. A role I am proud of and very happy about.

“But, we are three line players and we maintain a good balance and harmony amongst us.

“In Rostov I did not have such an outstanding role, nevertheless I could identify with it and performed well, I think. At FTC one of my main tasks is to organize our defense and I think I have grown in this role, while taking the next step in my development.”

While Behnke’s future at FTC Railcargo looks bright, Germany’s national handball team will have to do without her for the time being.  An unfortunate development to say the least as top-end talents like Julia Behnke are few and far between.