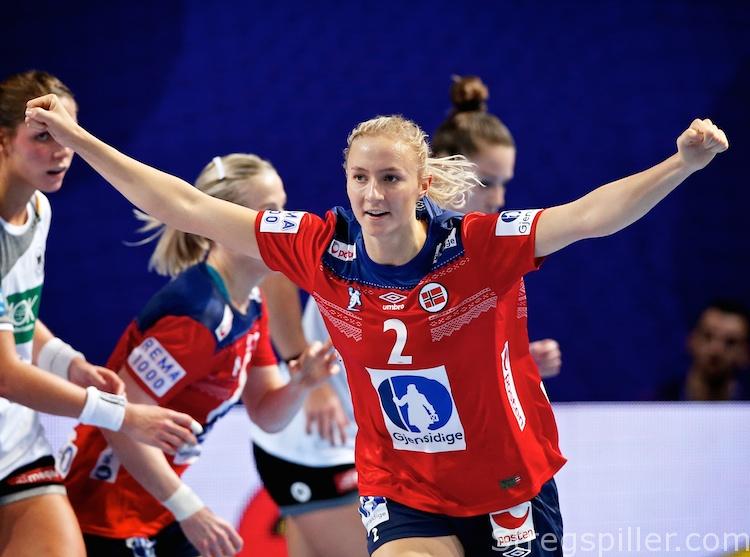 “I keep my feet on the ground”

INTERVIEW – At the age of 19, Henny Reistad is currently recognized as one of the greatest playmaker talents, not only in Norway.

However, the young Norwegian refuses to the let the success and fame get to her, as she reveals in this exclusive interview with stregspiller.com.

Ever since the fall of this year, life has been moving fast for Henny Reistad.

After she left Stabæk IF over the summer and joined the Norwegian champions, Vipers Kristiansand, she has enjoyed tremendous success in the Champions League as well as domestically.  The sum of her performances have earned her a nomination to the national team and she has shown her great potential there as well.

National coach, Thorir Hergeirsson, demonstrated his faith in the 19-year-old playmaker, when he kept her on the pitch in the final and hectic minutes of Norway´s opening match against Germany at the European championship. Reistad did not disappoint, to say the least.

She certainly could not be blamed for the surprising 33:32 loss, and it is no wonder that the situation left her with a bag of mixed emotions.

“I am a bit disappointed the way we presented ourselves – I find that we have much more in us, compared to what we showed yesterday. So, disappointment is the dominating feeling, right now.

“On the other hand, it was great to feel the confidence of the coach and to be sent on the pitch during the decisive moments of the game. It was awesome to be a part of it all in a hectic atmosphere.

“Of course, it was special, but the adrenalin overcame my nervousness,” explains Henny Reistad.

“Any kind of match practice helps me a lot in gaining experience and being part of such a turbulent affair is something you really learn from.

“Apart from the fact that it was my debut in a senior championship, those 10 minutes were extremely valuable for me in terms of gaining experience on the international level – no doubt. It probably means that I can take things a bit more easy in my next game,” she finds.

Champions League has been important

It is not that she is lacking international experience at the senior level, at all.

During the fall she has seen plenty of minutes in the Champions League, and she makes no secret about the fact that those matches have added to her maturity as a player.

“Those games have meant a lot and contributed a great deal to my personal development. It also means that it has been become a bit easier for me to enter the national team, than it might have been otherwise,” says the young center back who has caught the eye of the entire handball world, this season.

“Of course, it is nice to be noticed, at least when things go well – I enjoy it too!

“It is probably logical that I dream of a future in an even bigger club, in a bigger league, but that’s not anything new. I have done this all the time if you want to be as good as possible.

“For now, I keep my feet on the ground and focus on doing my best in the national team and for Vipers.

“Actually, I think we can go far in the Champions League with Vipers this season already. After taking four points to the main round, we have a good chance to reach the quarterfinal. Then, we will have to see who we’ll meet if we make it that far,” she says.

Dreaming of a European championship

The dreams of more success in the Champions League will have to be put on hold until after New-Year, however.

Right now, it is all about the European championship in France, where Norway will have to try and rise, following the disappointing defeat against Germany in their opening game.

The chance to defend the title as European champion still exists, of course. While Norway is used to winning championships, it would be a new experience for the debutant, Henny Reistad.

“It is a bit too early to talk about winning the European championship, but you can always dream. Winning the championship in my first attempt at senior level would obviously be really cool,” admits a smiling Henny Reistad.