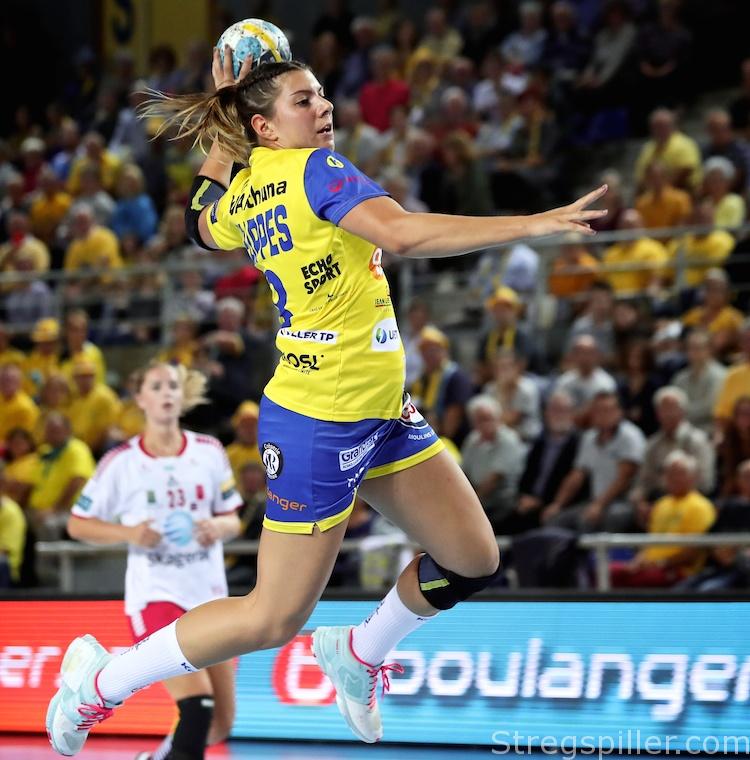 “I stay in my bubble”

INTERVIEW – For the first time since  EHF EURO 2016, Blandine Dancette won’t be a part of the national handball team of France. The 2017 World Champion and 2016 Olympic gold medallist has recovered from a foot injury, but has not played in a single game since the beginning of the season, as a result  France national team coach, Olivier Krumbholz, decided for plan B.

The right-wing position will now be covered by Laura Flippes (Metz) and Pauline Coatanéa (Brest). If you follow the Women’s EHF Champions League closely, you are surely familiar with these two names, as both of them have been playing a stellar season, thus far. For Coatanea, the upcoming EHF EURO will be her first international tournament, whereas Flippes is the more experienced player. At age 23, EURO 2018 will be her third major competition.

Flippes appears to be unfazed about all the media talk and noise ahead of the European championship, in France.

“I stay in my own little bubble; I’m pretty good at blending out everything around me.

“After games, my teammates often talk about the fans and how noisy they were but I didn’t hear them at all.

“It’s the same right now. I only focus on the competition and my game. The rest is none of my business,” says the left-handed winger.

Since the beginning of this season, she has been proving, that she’s up to the task and certainly belongs to the international level. Averaging about four goals per game in the Champions League, have boosted her confidence as well.

“I think, I took a huge step forward. In the past, I put myself under a lot of pressure. But, you get used to playing important games and this helps to keep calm on big occasions,” she says, before providing some insight why her season is going the right way.

“I’ve been playing a lot more than usual ever since my Metz teammate, on right wing, is on pregnancy leave. More time on the court and more responsibilities translate into better development.”

In the past head coach, Olivier Krumbholz sometimes picked four, or even five right-wingers at the beginning of preparation before cutting his list down to two. For the first time, Laura Flippes and Pauline Coatanea know, from the beginning, that they’ll be the ones entering the court against Russia, in Nancy, on November 29th.

“It’s really a good thing – I think both of us will agree on. You can play the last few games leading up to the championship without too much pressure and without having to fear that you won’t be selected because you missed a shot.

“Now, I feel more relaxed, more reassured. You’re not yourself when you’re competing for a spot on the team sheet, you’re always scared of something,” she explains.

Born in Strasbourg and playing in Metz ever since the beginning of her professional career, Laura Flippes will be one of the “local” players in Nancy, where France will play in the preliminary round of the EHF EURO.

“I never thought about playing such a tournament when I was younger.

“For me, the national team was very far away, I never thought I would ever wear the French jersey.

“But now, I’m really proud and very happy that I am in the team,” concludes Laura Flippes.