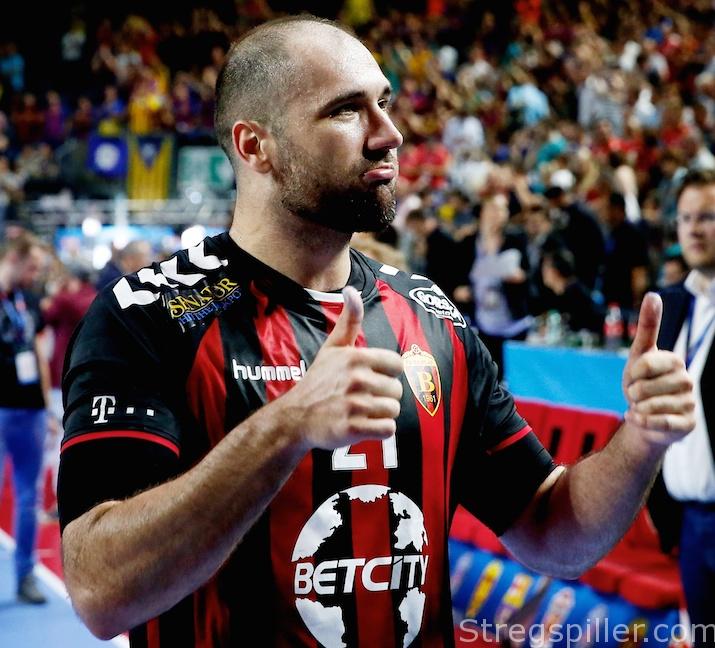 “I think we can still do better”

The past few days have been quite emotional for Spanish veteran, Joan Canellas.  First, he returned to his former club, THW Kiel, for the first leg of the EHF Champions League quarterfinal and then he opted to leave Vardar at the end of the season to join MOL-Pick Szeged.

I spoke to the reigning European champion about the matches against Kiel, his future and his impressive language skills.

You have been back in Kiel for the first time since leaving the club two years ago. I always wonder how special it is for professional athletes to return to a former venue as you didn’t play in Kiel for ages, just two seasons…

JC: Well, if you come back to a place where you played before it is always special. I had to wait a long time to play in Kiel again. I don’t want to say unfortunately, but unfortunately it was in the quarterfinal (of the Champions League ed.) and the match carried a lot of weight, compared to the group stage, for example.  Kiel was my last club before I joined to Skopje, so it was even more special.

In Kiel, you had the game under control before loosening your grip – still in the end Vardar succeeded. What happened along the way?

JC: They started with a 3-2-1 defense, before changing to a 6-0 formation. That’s one reason why we had less space and didn’t score from nine meters. That was our main problem but luckily our defense was performing on a high level.  In the second half we had a small crisis. This happens when you play away from home against a good team. Kiel was more aggressive and our defense, including Arpad Sterbik, had some problems.  All in all, it wasn’t our best performance, but the team is really hungry and in the end it was a good result for us.

Will long distance scoring be the key to reach the FINAL4 in Cologne?

JC: Usually, we score more often from nine meters, but in Kiel we just had a bad day. Once Kiel operated in a 6-0 defense it became really tough to score from far out, because they were defending very aggressively against the back-court players.  It’s easier against a 3-2-1 defense – then you also have the option to score from close range. Now, we will prepare hard to have as many options as possible in the next game. I don’t know if long distance shooting will be the key, but we will play better on both ends of the court.

Are you aware that it will be your last big match on home ground wearing the jersey of Vardar?

JC: I know, but for now I don’t think about it too much, which is quite strange. Sometimes we play in front of 50 people in the domestic league – it will be the last time in a full arena. It was already very special against Flensburg, last season. Right now, my focus is on tactics, to be ready mentally and not to think too much about everything else. We’ll have a lot of pressure and it doesn’t help if you make too much of it.

By the way, I remember you learning the Macedonian language. How is it going and what about Hungarian?

JC: I think German is more difficult than Macedonian. I tried hard to pick up German and I had one more year of time to learn it. In Kiel it was already tough for me to speak the language, while understanding it was less of a problem. In Macedonia most people speak English, so I lost my German a little bit and since we speak Macedonian within the team I learned it as well. I heard that Hungarian is very difficult but I also heard that people rather speak German than English, in Hungary. It will be tough again, but I already dealt with many languages; it won’t be a problem.

How long did you need to agree to the offer from Szeged?

JC: I still had contract in Skopje, so first of all I had to take care of that part but for me it’s better to move on considering the situation in Vardar. I looked at different options and Hungary was the best one of many.

Did it make a difference that Juan Carlos Pastor, another Spaniard, will be your new coach?

JC: Usually, I look for the best club to play for, as you never know about the coach. Sure, it was an easier decision as Szeged employs a Spanish coach and Spanish players. It will be easier to find my place in the team. But first, I looked at the project, the tactics and the system, the city, and the money. Everything has to be fine. Szeged offers all of it. In Germany, I was able to survive without a Spanish coach and without Spanish teammates for three years. It was no problem at all. It can help, yes, but it’s not a problem.

Getting back to Vardar and your match against Kiel on Sunday – why will we see your team in Cologne again at the end of May?

JC: Because we have played the best season in the history of the club, so far.  We almost won everything. Although we have been performing great until now, I think we can still do better.