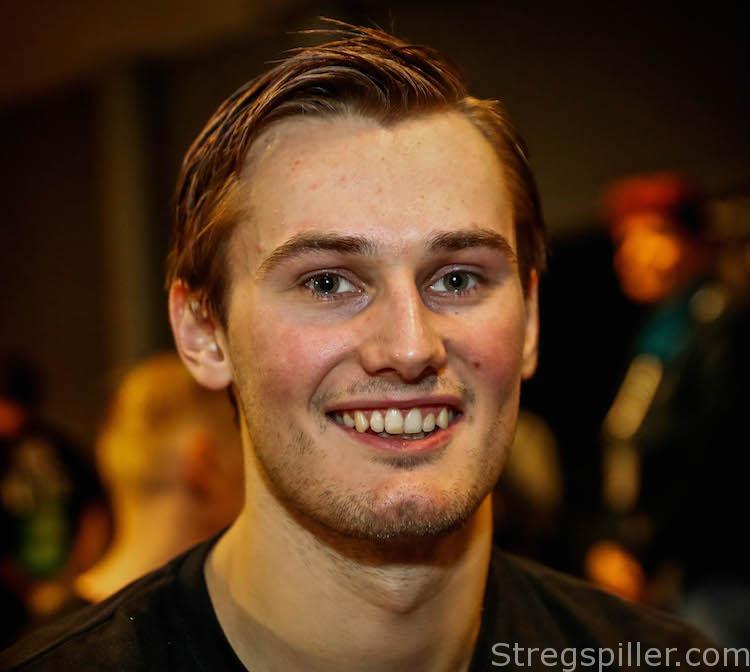 “I very much would like to exchange silver for gold”

INTERVIEW – He is only 21 years old, but Magnus Abelvik Rød is already playing his third major championship, and for obvious reasons, he dreams of upgrading that silver medal, he won at the most recent World Championship, in France, to a golden one, this year.

When I first interviewed Magnus Abelvik Rød, nearly three years ago, I already met a young man full of confidence and a good understanding what his future will hold.

Today, he left the same impression after taking the big step from Oslo based Bækkelaget to SG Flensburg-Handewitt, where he became German champion in his very first season.

“That was a tough change.

“First, there was the move away from home and leaving everyone I knew behind and go to a place where I didn’t know the language.

“However, I was integrated very quickly – probably because there are so many other Scandinavians in the team.

“But, there were challenges on the court as well, where I found myself in a completely different role from what I was used to. I went from the “go-to guy”, who was allowed to decide matches, to becoming a back-up player of sorts.

“That was a real issue, but I think I dealt with it in an OK way,” he says.

It’s difficult to contradict him, when looking at what he has achieved in only a short period of time – not only in Flensburg, but together with the Norwegian national handball team, as well.

Already, he is competing in his third major championship, the 2017 World Championship in France being his first and the one he likes to talk about most.

“I would like to forget the European championship, in Croatia, last year, where we only finished seventh, but I like to remember the World Championship two years ago and the silver medal in Paris, for obvious reasons.

“This time, I very much would like to exchange silver for gold,” he tells stregspiller.com.

In Flensburg, he is used to mostly playing in defense, while veteran, Holger Glandorf , still runs the show on the other end of the court. Therefore, he enjoys it even more, whenever he gets a chance to play in attack in the Norwegian national team, as he did this past Saturday, when Norway thrashed Saudi Arabia 40:21.

On that occasion, the 21-year-old right back scored nine goals on 11 attempts.

“I was great to play 60 minutes in attack as well as in defense.

“I haven’t had much time in offense in Flensburg, yet. Being able to spend more time in attack on Saturday and with so much success was even nice.

“Of course, everyone knew that the match against Saudi Arabia was a ‘Must-Win” and we showed that we were that much better than them. Still, the success is a boost to your self-confidence, when you see the shots going in. In addition, it gave me the feeling that now, I am in this championship and that’s a good feeling,” he says.

Making the best of it

While he enjoys his time in Norway’s attack, whenever he gets the chance, in Flensburg he’s mostly found on the defensive end.

“Of course, it’s some kind of a challenge, when you have Holger Glandorf in front of you, but he also gets older all the time!

“All I can do is to make the best of it – I think I have proven that I am a good player on the other side of the pitch. I certainly expect to spend more in offense, in the future,” says Magnus Rød who is rather young to become a defense specialist.

“That’s true and I have no plans of playing only in defense for a long time. We can talk about that, when I am 35!

“When that time comes, I may have to spare myself a bit, but right now, I take my defensive duties, because that’s my role at this moment. I do know that Flensburg have plans for me, also in offense and that’s the reason, why I decided to stay there.

“I know what I stand for and what I can do,” says the dedicated young man who is quite confident, when asked about Norway’s chances at the ongoing World Championship, where many of the pundits consider the team as one of the top contenders for the title.

“Of course, such expectations cause a slightly different kind of pressure, but it’s cool to be named amongst the teams who can take a medal, at least.

“Such expectations really suit us well. We have many young players who are hungry for success and we grow when experiencing this type of pressure,” says the 204 cm tall left-hander.

A team with their back against the wall

Understandably, he is satisfied how he and his teammates have handled their first two games at the 2019 World Championship, thus far – a 34:24 win over Tunisia followed a 40:21 victory against Saudi Arabia.

“We’ve agreed that we need to improve match by match and I think we’ve succeeded thus far.

“Now, we can look forward to a game against Austria on Monday. I expect a completely different match from what we’ve seen, so far.

“We will be meeting a European team playing a classic style of handball – actually, I am excited to see how it turns out,” concludes Magnus Rød, when talking about an Austrian squad that tries to recover, following a shocking 32:24 loss against Chile, this past Saturday.

“I am sure that they will be extra motivated and keen to show that they are not as poor a team as they looked like against Chile.

“Furthermore, they know us much better than our previous opponents did, as they have players in the Bundesliga as well, who know many of us from playing with or against us.

“I am certain that they will be more familiar with our way of playing handball than our earlier opponents were. It will be a completely different kind of game, I am sure.

“As a matter of fact, they have everything to gain, as they simply have to defeat us, to keep their chances of reaching the main round alive, and this will make this match even more difficult for us.

“I know only too well, what it can be like to play against teams, who are in a “Do-or-Die situation. It will be a challenge, which we will simply have to tackle head on,” explains Rød who admits that it’s difficult to not think about the “Group Final” against Denmark, later in the week.

“After all, we are in Denmark and we are reminded on this match and our rivalry, all the time.

“As you know many of my Flensburg teammates play in the Danish national team. Of course, everyone is talking about this game on Thursday and it is difficult to not keep it in mind.

“I said before, we’ll try to focus on improving day-by-day, and then we’ll take this particular match when it comes.

“Before this game there are four points at stake”, says Magnus Rød, who rates his own nation among the favorites to win it all.

“There are other contenders, as well. I think Denmark or Spain are the red-hot favorites among those, but I really would like to exchange that 2017 silver medal for gold,” ends Magnus Abelvik Rød.