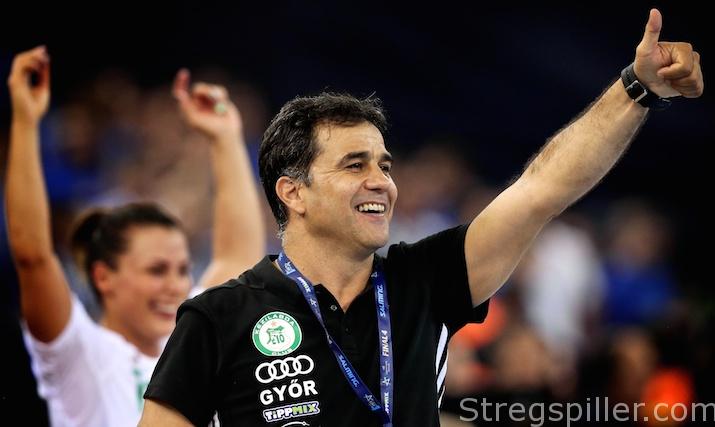 “I won’t let my emotions get ahead of me”

INTERVIEW – Ambros Martín is happy to share his thoughts about his last FINAL4 as coach in Györ, but he is considerably more reluctant to talk about his future.

His reasons for leaving Györ and joining Rostov-Don are not topics he wants to talk about, right now.

When you catch up with Ambros Martín these days, it is easy to learn his thoughs about the upcoming Women´s Champions League FINAL4 (May 12-13), where his team will be defending their 2017 title.

What the 50-year-old head coach is considerably more reluctant to talk about is himself and – in particular – his future.

Now, it’s a fact that he will be leaving Györ after the current season – it was one of the poorest kept secrets in women´s handball that he would join one of the Hungarian club´s toughest rivals – Rostov-Don. Martín signed a one-year deal with the Russian powerhouse with an option for another twelve months.

But this is a topic you cannot get the experienced Spanish coach to share his decision making process with the public – at least not at this point in time.

“I will talk about it after the season. Now, I am focusing on my current team,” is the answer you get every time this matter is brought up. Yet, he does not mind looking back on his six successful years in Györ.

“I want to remember everything and everybody from my time here in Györ.

“I do not want to forget anything. Györ and Hungary will always remain deep inside me and remain an important part of me.

“Coaching Györ has been my greatest experience. Every single day has been a nice experience and every game as well.

“I am taking so many special moments with me,” Ambros Martín tells stregspiller.com.

After taking over as head coach in Györ from Norwegian Karl Erik Bøhm, Martín won the Women´s Champions League three times with the Hungarian club so far – in 2013, 2014 and 2017.

Still, he does not want to dwell on his accomplishments nor does he want to reveal his feelings about winning a fourth Champions League title in his last season in Györ.

“I am just focusing on the really important things, and this is not important.

“What is important are my players, my team, our opponents and our focus on the task we have to solve.

“This should not be about me, but I can tell you that my entire life revolves around this type of competition.

“However, I am not going to allow my emotions getting ahead of me and mask the important things,” he says.

Even though he is reluctant to disclose his most inner feelings, he openly admits that there have been times, when he took a bigger bite than he could chew.  For instance, when he signed up as national coach in Romania besides his job in Györ, two years ago.

“I always knew what I wanted, and I am willing to fight for it, even if it takes an important part of my time.

“So, it wasn’t a problem for me, although I know that my decision was not understood by everybody.

“I am very aware that the work of a national coach requires much more time than I have at the moment, but it also made me feel even more responsible with regards to my current task; to help achieving the goal we have all agreed on.

“It is possible that my own expectations of the work involved as a national team coach were a bit over-dimensioned, but I try to live with the experience and make something positive of it,” he explains.

“Our chances are the same as in previous years”

Many people are seeing the upcoming FINAL4 in Budapest as the closest one ever and Ambros Martín agrees to a certain extent.

“In my opinion, in this type of knock-out competition, when you are playing two games within two days, there is no clear favorite.

“Whatever you have done before – good or bad – does not matter anymore.

“It is all about having a good weekend in the truest sense of the word.

“I see our own chance just as good as the one of the other three teams and as good as in previous years.

“I know my players, I know this team, I know our fans,” says Martín who admits that playing the FINAL4 in Budapest does provide his team with a certain home court advantage.

“What’s really important to us are our fans.

“They are our biggest supporters, before, during and after the matches.

“However, we also know that all good teams and players like to play in this fantastic atmosphere (in Papp Laszlo arena ed.).

“Even though we have had some problems during the season, we have survived, we are still alive, and we are ready for the final battles,” says Ambros Martín.