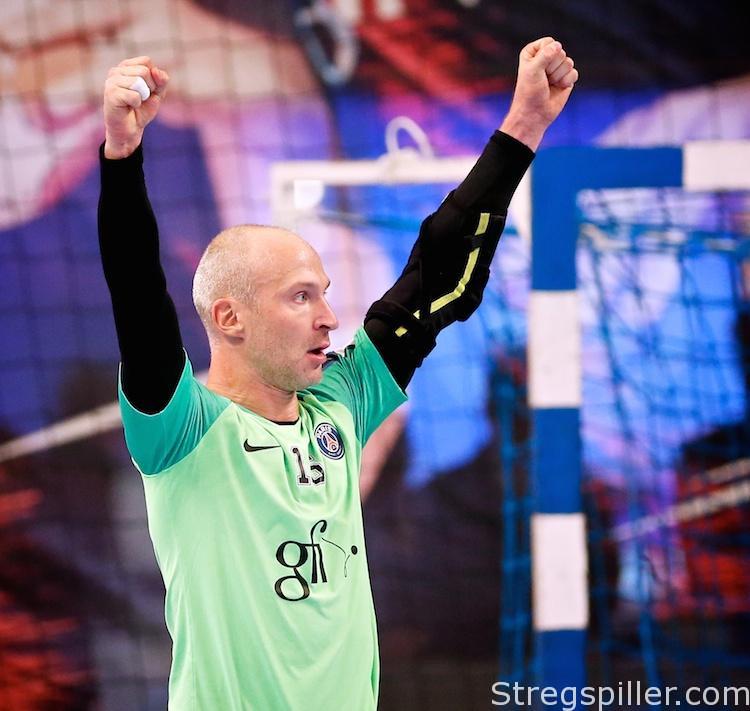 MATCH REVIEW – Paris Saint-Germain Handball are impossible to stop in Group B.  That’s the clear message following the 27:20 victory of the French club in Flensburg.

In one of their more difficult road games this season, they left no doubt which team would leave the court as the winner, while Thierry Omeyer stepped up successfully for the injured Rodrigo Gorrales.

*After seven matches, PSG led Group B with 14 points; Flensburg were in fourth place with just six points.

*Several Flensburg players, who sat out the game on Saturday, were back on the club´s team sheet but coach Machulla left it open which player would support the effort against Paris

*PSG, on the other hand, had to replace Spanish goalkeeper, Rodrigo Corrales, after his injury four days ago, and Nikola Karabatic was still missing, of course.

Last Saturday, at home against a depleted Flensburg team, PSG had significant trouble earning a narrow and fortunate one-goal win.

But, this Wednesday evening, on the road in Flensburg, the Frenchmen had absolutely no problems booking a clear victory.  Flensburg led 1:0, but the rest of the match was dominated by Mikkel Hansen & Co.

When in attack, PSG coach Raul Gonzalez started with Kim Ekdahl du Rietz as left back, instead of Mikkel Hansen, while Luka Stepancic replaced Nedim Remili on the opposite side.

With this line-up, it took Paris close to six minutes to score their first goal, but since Flensburg was struggling, Luka Karabatic´s goal from the line equalized the affair at 1:1.

Another important reason why Flensburg´s encountered scoring problems from the start was Thierry Omeyer.  Those, who thought Corrales´ absence would represent a serious handicap to PSG, were proven wrong from the very beginning.

The 42-years old  showed his class, once again.

Actually, in the first half PSG were the better team – period.   They fought harder, played better handball and as a consequence the game went their way.

At the half time buzzer the visitors were leading by three (12:9)

Paris started the second half with their strongest back court line, including Remili, Sagosen and Hansen and shortly thereafter the lead was extended further.

Behind a solid and well organized defense by Viran Morros, Omeyer continued to perform, and in attack, Mikkel Hansen fired on all cylinders.

In the 39th minute, Luka Karabatic limped off the court and did not return, but his absence did not make a difference anymore.  PSG had a firm grip on the game and the second half turned into an entertaining handball match, especially from a French point of view.

The usual excellent Benjamin Buric in Flensburg’s goal could not get his hands on many of the balls that came his way, and it was somewhat surprising that coach Machulla waited until the 55th minute before replacing him with Torbjørn Bergerud.

After the final whistle, some questioned why Gottfridsson and Karlsson were sitting on the bench as they could have made a contribution to turn the match around.  For others the reason was obvious as Flensburg’s next Bundesliga match is right around the corner (Monday, November 19th) against league rival Rhein Neckar Loewen.  Go figure.

In any event, in this match Paris were impossible to stop.

PSG continue to lead the pack, now with 16 points after eight matches, and it’s hard to see which team can stop them en route to winning Group B.

Maybe Pick Szeged can make the difference when they receive PSG in ten days from today – we will see.

Sitting on six points, Flensburg have been a disappointment in the 2018/19 Champions League and their performance, thus far, stands in stark contrast to what they deliver in the Bundesliga, week after week.

Unlikely that Flensburg will have to worry about reaching the Round of Last 16, but a good rank in Group B won’t hurt either.