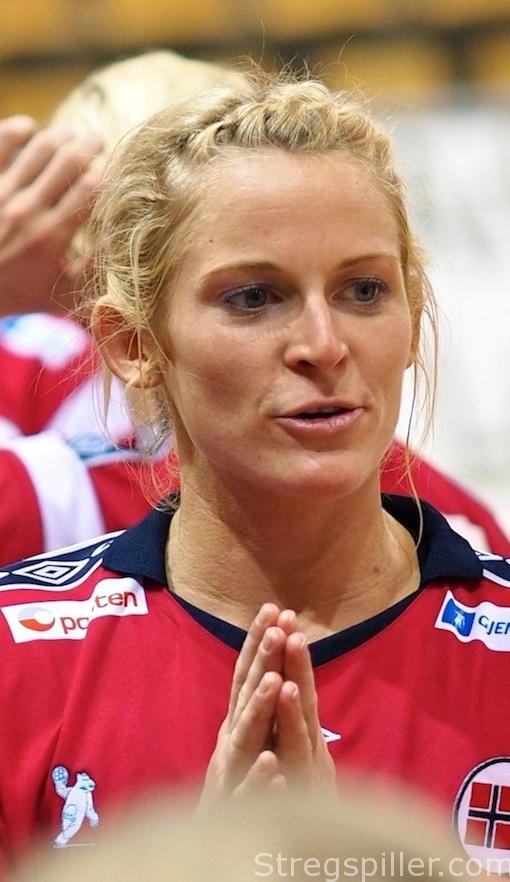 The name “Ida” originates in Germanic language and means “hardworking woman.” Nowadays the name is mainly popular in Scandinavian countries such as Norway.

Indeed not many adjectives could describe Ida Alstad (28) the multi-purpose back player of the national Norwegian handball team in a better way as she spends a lot of time and energy perfecting her skills on the handball court.  Nobody less than coaching legend Marit Breivik has called Alstad (next to Heidi Loke) the most improved player on the Norwegian squad of the last few years praising her work ethics, especially.

Her refined skills will be much needed as team Norway enters the critical phase in preparation for World Cup XXI in Serbia.  Following the unexpected pregnancy of Kristine Lunde-Borgersen and the prolonged injury of Marit Malm Frafjord, Norway’s coaching team has to fill a giant hole in central defense.  Important pillars that played key defensive roles in earlier championships have either retired (Gro Hammerseng-Edin) or taken an unspecified break from the national handball team (Goril Snorroeggen).  Given these unfortunate circumstances nobody was really surprised when coach Hergeirsson announced that Ida Alstad would take on increased defensive responsibilities going forward.  Helping out her team by taking on a position that she has not been accustomed to playing in previous tournaments is nothing new for Alstad.  In fact it might have brought back memories of the early part of her career at Byasen Trondheim when she played left wing as relief player for Ingrid Nygaard Pedersen and Camilla Herrem.  At that time she also saw playing time as back-up playmaker as well as line player on occasion.  In short, whenever a position became vacant for whatever reason Ida Alstad was willing and able to fill the void.  Aside from having developed into one of the most prolific scorers in the world her fighting spirit and unselfish on-court behavior have become her true trademarks.

Such qualities did not go unnoticed elsewhere in Europe following the spectacular 2012 European Championship final between Norway and Montenegro when Alstad’s 11 goals carried team Norway to a second overtime period but not to a six title.  By the time Alstad returned back to her native Trondheim she had to deal with the deteriorating economic condition of the club she played for since the age of five.  When asked about her future she left all doors open but subsequently did not rule out the possibility of joining another club outside Norway.  After Byasen dropped out of the Cup Winner’s Cup in February of this year Ida informed her teammates that she would leave Trondheim in the summer.  Shortly thereafter she disclosed the name of her new handball home – Danish club TVIS Holstebro. Alstad openly admitted that she had various offers on the table including clubs from Germany and France.  But having closely followed Danish handball for many years she saw the best prospects in the team from Jylland.  Much to the joy and initial disbelief of Holstebro’s sports director and head coach Niels Agesen, Ida Alstad signed a two-year contract.

It will take some time before Alstad fully adjusts to her new teammates and style of play in the world’s best league of women handball but there is little doubt that she will contribute significantly to the game of Holstebro once fully integrated.  The disappointing loss against the team of Baia Mare in the decisive qualification match for the 2013/2014 Champions League was a set-back for Ida Alstad and TVIS alike but one can safely assume that she and the rest of the team will come back stronger once the next opportunity presents itself.

On the international level Alstad’s near term challenge resides with team Norway in two upcoming EURO 2014 qualification fights against Romania and the Mobelringen Cup tournament in Drammen next month.  While practicing various tactical measures coach Hergeirsson will use each and every game to solidify the new defensive line-up of the Norwegian national handball team – and Alstad will be Ida – a hardworking woman.