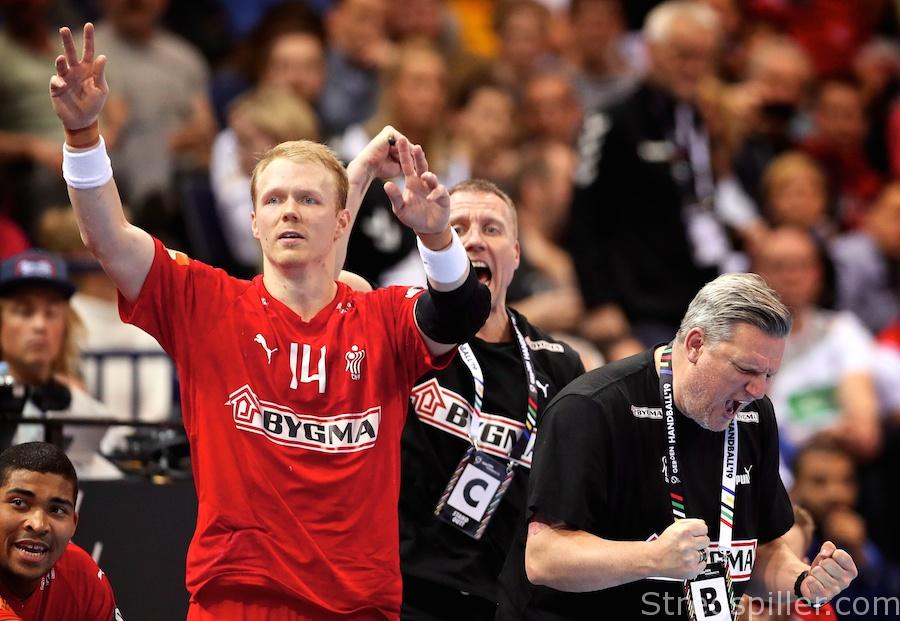 A nervy and occasionally scrappy Scandinavian derby was decided by experienced heads and a few moments of inspiration as Denmark successfully retained their World Championship crown with a two-goal win over Sweden.

Coach – Nikolaj Jacobsen – 9
Used his squad brilliantly today. Things were not looking great for Denmark at half-time but Jacobsen kept things moving, trying out back court and defensive line-ups until he found the right combination for the occasion.

Niklas Landin – 10
A true match winning performance. He hasn’t had the best tournaments, overall, but he’s one hell of a man for the big occasions. 15 saves, 10 in the second half, for 41% as he made some outstanding stops to keep Sweden at bay late on, including the final penalty stop. Such a dominant figure when on form.

Mikkel Hansen – 9
Dictated proceedings early on, taking advantage of Sandell’s passiveness in defence but was soon wrapped up by Sweden and had a rare penalty miss. Came out of the break flying, scoring three more and put in a more rounded performance, even slotting in at right back. A performance which helped put the tournament’s MVP award in his hand.

Nikolaj Øris – 9
Having barely played at this championship, the 34-year-old right back was thrown in after Gidesel was forced to the wing and he excelled. Scored a perfect five from five shots, including a scorcher at the end of the first half, such a contrast to two years ago, when he was given a few moments on court at the end of the final.

Jacob Holm – 9
The super sub! Only played for 10 minutes in attack but made a massive contribution. Jinking in between the Swedish defenders and whipping in four goals in five minutes, he completely changed the face of the game and gave Denmark the momentum and a 22:20 lead.

Henrik Møllgaard – 8
Had Gottfridsson in his pocked in an assured performance in the middle block. As well as his trademark marshalling of the defence and some big blocks, he even popped up with a couple of goals in attack.

Lasse Andersson – 8
Played the entire game in defence and did it brilliantly. Helped shut down Gottfridsson and Carlsbogård early on, then brought across to deal with Lagergren late on. Also scored a nice goal and gave two assists in counter attacks.

Magnus Saugstrup – 8
Enjoyed a strong start in front of goal with two goals in the opening minutes but two suspensions left him in early trouble. That cut down on his court time but when he finally got back on court, he got stuck in, helped open things up in the Danish back court and scored a third goal on the line.

Magnus Landin – 7
His impact today was mostly in defence, where he was tested over and over again by Sweden’s right backs. He was caught out a few too many times but put in a good shift and was switched on whenever required in attack, scoring both shots on goal.

Mathias Gidsel – 5
Nervous start, throwing the ball away in the opening minutes and having a long-range shot easily saved. Moved out to right wing after Svan was injured and scored his only chance.

Mads Mensah – 5
Not a great day in front of goal for Mads. Helped to shore things up when he came on midway through the first half, though he merely accommodated his fellow back court players.

Anders Zachariassen – 4
Started the second half in defence and struggled a little bit physically and missed his only shot on goal.

Lasse Svan – 4
Not much you can say about his performance today as he wasn’t really used in the opening quarter, before being forced off with an injury.

Morten Olsen – 3
Started the game at centre back and wasn’t tuned in. Only lasted 10 minutes as he committed a turnover and missed both shots on goal.

Simon Hald – 2
Missed a sitter (and the entire goal) while a man up late in the first half, along with two other misses and a poor suspension. Didn’t get a look in after the break.

Coach – Glenn Solberg – 7
Big question pre-match is how Sweden would deal with Denmark’s 7vs6 and Mikkel Hansen. 7vs6 was not an issue but it looked like they had found a way to deal with Hansen by the quarter-hour mark. The team’s limitations were exposed with both Gottfridsson and Carlsbogård misfiring, though they continued to find ways through, thwarted in the end by an inspired Landin in goal.

Albin Lagergren – 8
Changed things up for Sweden when he came on at right back. Looked to go outside and expose Hansen on the wing in defence, which worked well as he scored a pair of goals and won a penalty. His second half was a lot shakier as he missed some great chances, though his overall impact was perhaps Sweden’s best.

Frederic Pettersson – 8
Put in a surprisingly good performance. Scored both of his chances on goal and was an active and imposing presence in the Swedish middle block.

Frederic Pettersson – 8
Put in a surprisingly good performance. Scored both of his chances on goal and was an active and imposing presence in the Swedish middle block.

Hampus Wanne – 7
Got the game off to a perfect start with a goal from a seriously tight angle and recovered well from having a shot saved which he should have scored. Ended up as Sweden’s top scorer with five from eight, though his final miss was a crucial one – a penalty to cut the gap to a single goal late on.

Mikael Aggefors – 7
Came on and did exactly what was required of him, saving three of the eight shots he faced, providing his team with a chance to come back late on.

Felix Claar – 7
Offensive foul in his first set attack but things looked up for him from there. Was an assured presence in defence, strong in transition defence, scored a couple of nice goals and forced some suspensions on Denmark.

Lucas Pellas – 6
Short spell on court, during which dished out a brilliant assist for Lagergren and scored both of his penalties.

Valter Chrintz – 5
Came on late in the first half for a misfiring Pettersson and did what was required, scoring his only shot, almost adding another which was denied by the half-time buzzer.

Andreas Palicka – 5
Huge save from a Hansen penalty late in the first half and looked to be winning the keeper duel by half-time. It was all downhill from there, however, as he failed to make another save and was replaced before the final quarter.

Max Darj – 5
Had a solid game in defence, for the most part, throwing himself about well but was only able to contribute in attack when it was almost too late.

Jim Gottfridsson – 4
A couple of early shots blocked down but it was third time lucky when he smacked one into the top corner on the 10-minute mark. Denmark saw him coming a mile away though as he ended the first half with a single goal from six shots. Delivered a classic breakthrough goal shortly after the break and offered other solutions with five assists and penalties won – though his 2/10 shooting screams too loud to ignore.

Daniel Pettersson – 3
One goal from three on wing shots is far from enough in a low-scoring game with such fine margins. Tried to be too smooth with the shots he missed and paid the price.

Jonathan Carlsbogård – 3
Looked a bit nervous in the first half in attack, shooting 1/4 but was much better in defence, recording some important blocks and well-timed tackles. His shooting was worse after the break, two ill-judged attempts bringing his game in attack to an end.

Lukas Sandell – 3
Torn to shreds by Hansen and Holm in defence and that seemed to affect his confidence going forward as he did not take on the shots you’d expect him to. His only two were goals but his day will be remembered more for the errors.