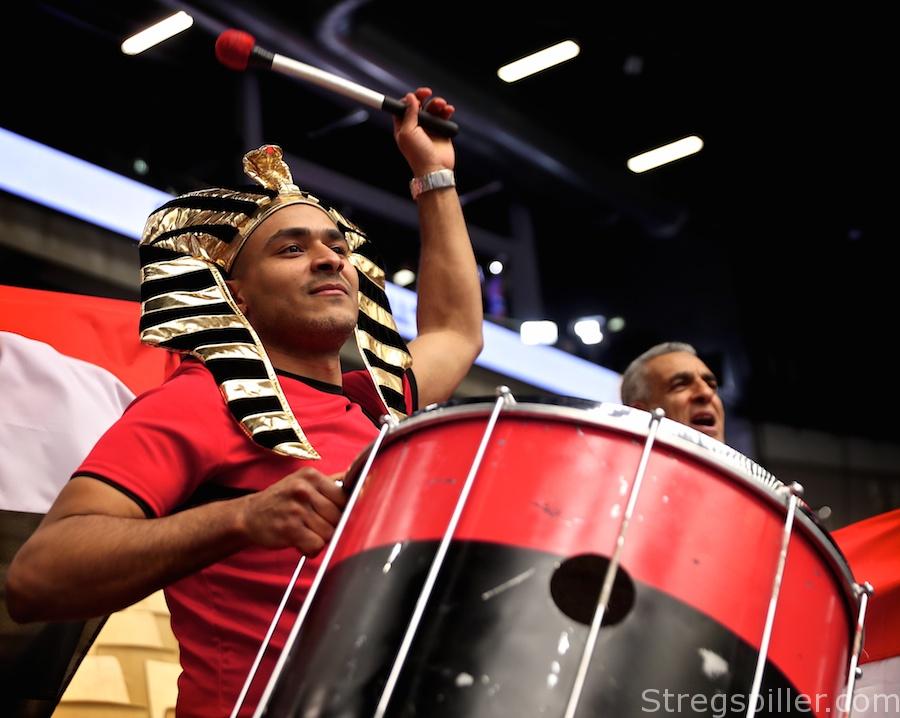 Slovenia’s task was clear, win tonight and they’re through. Confidence and form has been building since their slow start and their grit was shown in the comeback draw against Sweden. Some unwelcome news was the absence of Dragan Gajic and Stas Skube were out of the squad with the stomach bug which has hit a few teams – then hit the team harder as Dean Bombac, Blaz Blagotinsek and Borut Mackovsek were all reportedly struggling shortly before throw-off.

The hosts knew a victory or draw would be enough to see them through. Having torn through the main round so far, their eyes were set on claiming top spot and avoiding Denmark in the quarter-finals.

In a match that had all the ingredients of a true knockout game, the score finished 25:25, knocking Slovenia out. A 5:0 run for Egypt early in the second half turned the game on its head and in the end, they just did enough to secure a top two finish in group 4.

Slovenia put their stomach problems to one side as they came out swinging, taking an early three goal lead. That soon turned into a 10:5 lead as Klemin Ferlin shut up shop in the Slovenian goal.

As the half progressed, however, Slovenia’s attack dried up and Egypt began to find some joy in front of goal through the left-handed duo of Yahia Omar and Mohammad Sanad, reducing the deficit to 10:8. All things considered, Egypt would have been happy with that score but Slovenia had other ideas and  Blaz Janc buzzer-beater gave his side a deserved 12:8 advantage.

A 5:0 run early in the second half saw Egypt draw level for the first time and with that, momentum was well and truly in their favour. Who knows how many spectators there were at this game with no spectators but they sure made a fierce noise as Egypt took their fate back into their own hands.

Slovenia looked nervous and it seemed as if only Blaz Janc and Klemin Ferlin were truly up for the fight. Egypt blew their chance to secure a victory as Mohamed Mamdouh missed his fifth shot of the night but a draw was all that was required for the hosts nation to book a spot in the quarter-finals.

In a just world, Klemin Ferlin would be lauded for a match-winning performance today. He set the tone for Slovenia with a string of brilliant saves in the first half, 11 in total, backed up with an Urban Lesjak penalty stop.

Ferlin continued to shine as he ended up with 18 saves but it was Mohamed Eltayar who was the happiest of the keepers in the end as his six stops helped Egypt claim the point they needed.

Defence turned out to be Egypt’s best form of attack in the second half as they remained relatively solid throughout the 60 minutes and secured a series of crucial turnovers, leading to easy goals, in the third quarter.

As well as coming up against an in-form Ferlin, Egypt’s attack was painfully slow, too often relying on 1vs1 situations in the back court.

While they improved somewhat in the second half, Slovenia’s attack fell apart as they gave the ball away over and over again, allowing Egypt back into the game.

I feel some credit has to be given to both coaches, although both left plenty to be desired.

Roberto Parrondo attacking strategy fell flat on its arse in the first half as there was absolutely zero pace and Slovenia were able to match any direct duels Egypt threw at them. Whatever he said at half-time worked, however, as the passion and power returned as soon as they stepped back on court.

With some key players out or weakened with the stomach bug, Ljubomir Vranjes made the most of what he had in the squad. The turning point was the decision to take the keeper out in the second half when his attack had lost their flow and tried to force things to happen, turning the ball over and literally throwing their lead away.

Egypt are through to the knockout phase of the competition, a minimum requirement and something most of us expected before this championship began, while the other team many of us expected to go through with them, Slovenia, are out of the running for a medal.

Barring a surprise victory for the Russian Handball Federation over Sweden, Egypt will finish second in the group and move on to face reigning world champions Denmark in the quarter-finals.