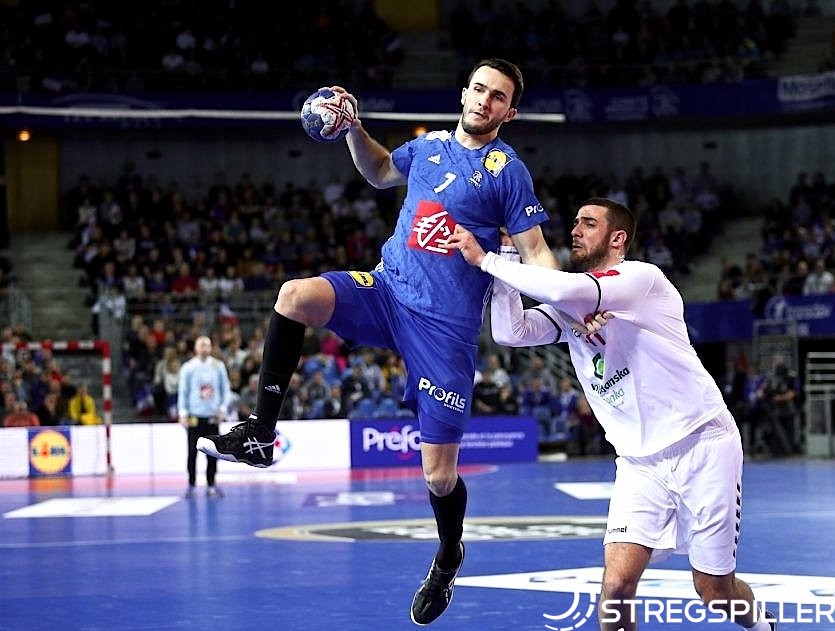 Changing clubs can be a bit hard to adapt to, especially for young players and even more so when going to another country. That’s exactly what happened for Romain Lagarde. At age 22, he left Nantes in the summer of 2019 to join Rhein-Neckar Löwen and only now he begins to see the light at the end of the tunnel. Just in time before the EHF EURO 2020 gets into full swing.

Things have not exactly worked out the way you wanted ever since you arrived in Mannheim or have they?

RL:  There were a lot of ups and downs. I started well and then in the fall things became a little bit more complicated for me. I did not play as much and when I did, I was not as efficient as everybody else.  It was not what I was expecting of myself. But, in December it got much better.

Did you need a game like the  one you played against Bergischer HC, to make a point?

RL:  To make a point is not exactly the words I would use, but it was great for my confidence that I was able to score seven goals.  It  was my best performance with Löwen so far and it shows that everything is heading in the right direction. Hopefully, I will be able to pick up where I left off when I return in February.

Do you have an explanation for the poor period you went through during the fall?

RL:  I think it was the result of a number of reasons. The summer was busier than usual as I had to move to a new country with everything that this implies.  I am also learning a new system, a new language that I don’t speak yet – a lot of things came together at the same time. And, in this business there is no time for adjustments – the coach needs to have guys on the court who score. So, I got not as much time to play, but that’s normal.

Speaking of reasons – what were the key factors that made you join a club in the Bundesliga?

RL:  I think I needed a change.  I wanted something new. I also wanted my position challenged on a daily basis and that’s what I got.  A crazy number of games are played in the Bundesliga; we already played 20 league games, while in France they played seven games less. That’s a huge difference. Every match is a fight and we see unbelievable results every weekend – there is no room for error. In France, you sometimes can be a bit more relaxed, although with every season that goes by it’s less and less the case. Still, in Germany there is no room for rest.

“No room for rest” – as in, no Christmas break?

RL:  The day after our last game against Bergischer HC, I was in France with the national team. I was a little bit tired, but all right. I won’t say that I’m happy having missed a family Christmas for the first time in ages, but you can’t have everything!

You already won two bronze medals in your first two competitions with France thus far. How does it feel?

RL:  I cannot say I’m happy with them. When you’re a competitor, you want to win every game, every title and a bronze medal just doesn’t make the cut. I know that we’re a young team, that we still have a lot of progress to make and all of that, but I felt like we could have done better in these two semi-finals. At the last world championship against Denmark, we were not on the court; we did not even fight.

At the age of 22 are you not tempted to say that it’s already a good performance after having won two medals?

RL:  No way. These two bronze medals have to be the starting point of something bigger.  This can’t be the end of it.

Do you feel that more is expected from you compared to the previous two seasons?

RL:  Yes, I’m not the young kid that just arrived anymore.  At the EURO in Croatia, I did not quite know what to expect, what my place on the roster was. Already at the 2019 World Championship it was different and now I feel like, I can’t “hide” anymore. There are more responsibilities to take and I see younger players arriving who compete for a position – funny, when you think that I’m only 22.

Will we see Romain Lagarde playing on the center-back position at EURO 2020?

RL: Yes – I think so as Kentin Mahé is out with an injury. But, that’s not something new to me, as I’ve already done it in Nantes and even at Rhein-Neckar Löwen.  I switch a lot with Andy Schmid and that provides me the opportunity to bring a different kind of danger. Although, I feel more comfortable on the left side, I’ll help wherever I’m needed.

Do you feel more pressure ahead of the upcoming EURO?

RL:  I think it’s not only me but the whole team. There is a lot at stake in this competition including the Olympic ticket and the next World championship. We are fully aware that if we win the title at EURO 2020, not only will we lift a trophy but we will also tick all the boxes and qualify  for the next two competitions. It would also mean more rest and less pressure in the next few months.