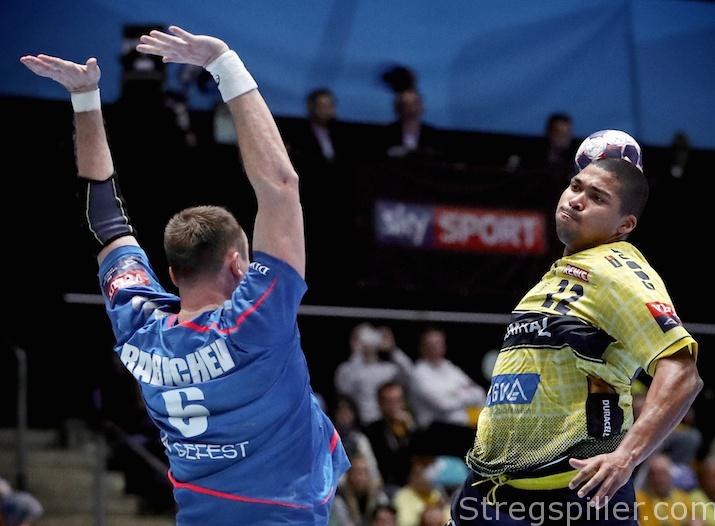 The DKB Handball-Bundesliga season started this past weekend again and is sure to offer another year of exciting matches, stunning goals and countless, spectacular saves. Before things get into full swing let’s take a look at some of the players that will make the upcoming campaign even more interesting to watch. I opted for six players you should keep in mind between now and next June. Some of them are well known, yet they are almost all newcomers to the league.

1.) Mads Mensah Larsen (Rhein-Neckar Löwen) will have to step up, finally.  The Danish left-back struggled in his development in recent years.  Last season, he mostly served as back up to Kim Ekdahl du Rietz, who retired from professional handball this summer. His many outstanding performances forced Mensah to watch from the bench when the game was on the line, as the Swede flourished knowing that he will soon be gone.  This year it’s up to Mads, making sure people won’t miss du Rietz too much.  Yet, I remain unconvinced that he will be able to grab this opportunity.

2.) Tim Suton (TBV Lemgo) was dubbed “the next big thing” in German handball when he won the scoring title in 2. Bundesliga – only eighteen years young.  Thereafter, he wasn’t able to find his spot on a star-studded Rhein-Neckar Löwen roster and soon moved to Lemgo.  After one difficult year with TuS N-Lübbecke he re-joined his former club, but the team struggled last season. Thanks to Suton, Lemgo avoided relegation.  Now, he appears to be ready to take over, if he hasn’t done so already.

3.) Miha Zarabec (THW Kiel) is one of my favorite players – I openly admit.  The way he dominated Rhein-Neckar Löwen last year in the Champions League when he was still playing for Celje was mind-blowing.  His speed and vision is outstanding, he will bring a new dimension to this team.  Domagoj Duvnjak’s comeback will probably take away from Zarabec’s time on the court, but I feel his quality will force coach Gislason to leave him on the pitch more often than many expect, right now.

4.) Pavel Atman (TSV Hannover-Burgdorf) is one of those intelligent players and I truly enjoy watching him.  His vision on the court is comparable to the one of Zarabec, but he adds more size. And unlike the Slovenian wizard he has to learn the German from scratch.  Currently he is out with a foot injury but if he can get healthy soon and stay on the court for most of the season, he will bring much-needed leadership to a team that struggled quite a bit during an unprecedented streak not winning a single game, in the spring of this year.

5.) Sebastian Heymann (Frisch Auf Göppingen) is a physical force.  He is just 19 years old, but his upper body looks like he is a grown up.  His shot is of lightning speed, although he still has to learn how to use it properly.  With Lars Kaufmann in retirement, he will see additional time on the pitch and in the meantime he will be able to learn from his experienced teammates, Zarko Sesum, especially as both share the same position.  Göppingen is playing on the European level once again, so he will get plenty of opportunity to show his talent.

6.) Stefan Salger (TVB 1898 Stuttgart) just appeared in his first match in the DKB Handball-Bundesliga this last Thursday.  He played an instrumental role, scoring five goals from right-back position as his team stunned the heavy favorite, MT Melsungen.  Salger measures 207 cm, but still moves around rather quickly.  As competition is almost non-existent, coach Markus Baur will have to rely on his services quite frequently.  It will help his development dramatically, being just 21 years of age.