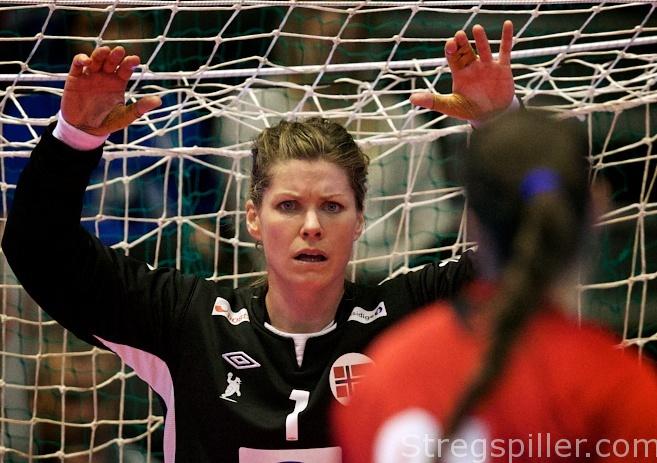 It was only two weeks ago that the prospects of Norway’s “Handballjentene” at the upcoming EURO 2014 in Hungary and Croatia had reached another low point.  Following the earlier announcements of Anja Hammerseng-Edin and Isabel Blanco to end their respective careers in the national team, Marit-Malm Frafjord’s and Mari Molid’s continued unavailability caused by long term injuries and Katrine Lunde’s pregnancy over the summer; right-back Linn-Jorum Sulland had just suffered a foot injury that would prevent her from making the journey to Debrecen (Hungary), the town hosting the teams of Group B.  All of a sudden, successful scoring from beyond the 9-meter line seemed to be out of the question for Norway’s premier handball team.   How would they be able to stretch the defensive lineup of Denmark, the team named by many experts as the number one candidate for the top prize at EURO 2014 and main contender in the preliminary round, without a real distance shooter?

Coach Hergeirsson was quick to seize the moment and confirmed that his team would certainly not be the first and foremost candidate for winning another European Championship.  Norway’s press began discussing the diminished chances of the country’s famous handball crew while the rest of Europe’s sports media was weighing the prospects of their respective national squads – not without a trace of glee, given the misfortunes of women’s handball powerhouse.  A genuine opportunity for yet another nation but Norway to take Europe’s handball crown appeared to be more real than ever before.  Goalkeeper Kari Alvik Grimsbo’s knee injury in the very first match of the tournament against Romania and her subsequent departure only added to the worsening outlook.

Fast forward – December 13th.  Location: Foenix Hall, Debrecen.  Norway’s Betina Riegelhuth just finished her day at work together with the rest of her teammates, beating Spain 29:26, in the first match of the main round at EURO 2014.  “Linka” Riegelhuth-Koren’s younger sister had contributed seven goals and was leading all of Norway’s scorers – unexpectedly to the occasional observer of women’s handball.  But already in the match against archrival Denmark, Betina Riegelhuth had spent important minutes on the floor and contributed a couple of valuable and timely goals.  Still her performance vs. the bronze medal winner of the London Olympic’s stuck out and not only because of her goal from the 12-meter mark in the dying moments of the game’s first half.  The aforementioned EURO 2014 match against Denmark had turned into real confidence booster not only for her but her club colleague Maja Jakobsen as well.

Prior to the games against Denmark and Spain, Norway’s coaching staff had reserved only limited time on the pitch, for Storhamar’s left-back.  In fact, during the most recent edition of the “Golden League” tournament in Larvik and Oslo, Betina Riegelhuth spent only a few minutes on the floor, in order to relief some of her more experienced teammates.

As mentioned above that was two weeks ago.  Now, it is difficult to see how Betina Riegelhuth will not receive even more playing time.  Not since the days of Katja Nyberg did Norway have a player covering the position of left-back with the same athletic qualities, including a remarkably powerful jump-shot.  While Kristine Lunde-Borgersen, Anja Hammerseng-Edin, Veronica Kristiansen and Ida Alstad all have their own qualities and talents, they hardly compare with the raw power of Betina Riegelhuth.  After the match against Spain, coach Hergeirsson pointed out Riegelhuth’s defensive abilities as well but he must appreciate what she produces at the other end of the court even more.

All in all, an invigorating, “new” element in the tactical arsenal of Thorir Hergeirsson and Mia Hoegdahl and that Norway’s competitors have come to terms with – quickly.  An inconvenient truth as EURO 2014 enters its decisive stage.